Forum List What's new Dark Style Change width
Log in Register
What's new Search
Menu
Log in
Register
Navigation
Install the app
More options
Dark Style
Close Menu
Posted on February 6, 2018 by Todd Erwin
You are using an out of date browser. It may not display this or other websites correctly.
You should upgrade or use an alternative browser.
One of the better "found footage" movies 4 Stars

Originally intended as a tie-in to the theatrical release of The Cloverfield Paradox (which has since been cancelled after being acquired outright by Netflix), Paramount has released Cloverfield in a new 4K UHD Blu-ray. Unfortunately, due to the film’s low-fi origins, there is little advantage gained in this upconverted release.

I am not a fan of the “found footage” sub-genre. I’ve watched (or attempted to watch) several of these films, and to me, most of them appeared to be cheaply made variations of each other, throwing in awkward jump cuts and and extra shaky camera movements to try and make them authentic. Most of them are ultra low budget independent films made by wanna-be filmmakers, but there have been some studio produced ones that are truly awful; Apollo 18, V/H/S (and its many sequels), The Amityville Haunting, Unfriended, and even Halloween: Resurrection tried to use “found footage” as part of its plot to dismal results. There have been a noticeable exceptions that were actually rather creative. The Blair Witch Project (which started this whole craze) and Paranormal Activity quickly come to mind, which brings us to Cloverfield, which is probably the slickest and highest budgeted of all of them, and perhaps the most popular of “found footage.”

The movie begins as if someone had inserted a found SD card into a playback device, with color bars, test patterns, a watermarked “Property of U.S. Government – Do Not Duplicate” and a title card letting the audience know that the subject is “Multiple Sightings of Case Designate ‘Cloverfield.'” We then see what appears to be a home movie of a young couple, Rob (Michael Stahl-David) and Beth (Odette Annable) in bed discussing what their plans will be for the day, with the time stamp of April 27. It then cuts to another young couple, Jason (Mike Vogel) and Lily (Jessica Lucas), in a bodega grabbing supplies for a party and discussing videotaping the guests wishing Rob good luck on his new job in Japan, time stamped May 22. When they arrive at the apartment, Jason talks Hud (T.J. Miller) into taking over the videotaping from him, much to Lily’s dismay. Hud interviews several of the guests, including a girl he has a crush on, Marlena (Lizzy Caplan). After Rob shows up for the big surprise, there is a loud crashing noise, followed by an explosion and a brief power outage. As the party members make their way downstairs, the head of the Statue of Liberty rolls violently down the street. A monster is attacking New York City, with Hud capturing our main characters as they try to escape.

Director Matt Reeves (Let Me In, War for the Planet of the Apes) and writer Drew Goddard (The Cabin in the Woods, The Martian) tell an often exciting and horrific story with interesting characters. The camerawork by both Michael Bonvillain (Lost, Alias) and actor T.J. Miller is convincing, although some moviegoers found some of the exaggerated shaky hand-held shots to be nauseating up on a 50-foot screen. Is Cloverfield a good movie? Not really, it does have some fun moments but as with most “found footage” movies, the “authenticity” sometimes feels too forced. Plus the fact that they keep referring to a “tape” in the camcorder, when we are told at the beginning that this is from a found SD card.

Cloverfield was shot on Panasonic and Sony prosumer camcorders with a maximum resolution of 1080p. I assume Paramount upscaled their digital intermediate that may have been completed at 2K up to 2160p for this release, fololowed by a new color grading in high dynamic range using Dolby Vision. Considering that the movie began with what can now be considered low-fi source material, is there any real advantage to this 4K UHD Blu-ray release from an image quality standpoint? The answer is, not a whole lot. Video noise is more evident here, thanks to the higher resolution, and fine detail gets a minimal increase. The only true benefit is in the addition of high dynamic range using Dolby Vision (which decoded as HDR10 on my system), allowing for slightly deeper blacks and more refined colors. Unfortunately, for me, that makes the film just that much more professional in its presentation, which I found to be mildly distracting.

The 4K UHD Blu-ray release of Cloverfield contains the same Dolby TrueHD 5.1 track that can be found on the included original 2008 Blu-ray release. This is a very active and creative surround track that puts the viewer almost dead center as if they were the camera operator. I’m guessing that we are supposed to believe the camera had a 5.1 microphone on it, if the filmmakers wanted to be authentic. Kidding aside, this is still a reference quality 5.1 track. I’m just surprised Paramount didn’t upgrade it to Dolby Atmos for this release as added value.

The UHD disc contains no special features whatsoever. Those can be found on the included original Blu-ray release.

Deleted Scenes (1080p; 3:25): Four scenes, playable individually or as one piece, with optional director’s commentary; Congrats Rob, When You’re In Japan, I Call That a Date, and It’s Going to Hurt.

Digital Copy: An insert contains a code to redeem digital copies on both UltraViolet (via ParamountMovies.com or Vudu) and iTunes.

Personally, I found the original 2008 Blu-ray played more authentically as a “found footage” feature than this spiffed up 4K UHD Blu-ray, and the “added value” of a 4K release here is minimal.

The bulk of Cloverfield was actually shot with Thomson Viper and Sony CineAltas. Hardly "prosumer".

Without addition of an Atmos track I doubt I’ll buy the 4K.

Thought it was thrilling and genuinely scary.

TonyD said:
Without addition of an Atmos track I doubt I’ll buy the 4K.

Thought it was thrilling and genuinely scary.
Click to expand...

Yeah - I dislike the vast majority of "found footage" movies but "Cloverfield" used the format to its advantage and offered a good thrill ride.

TonyD said:
Without addition of an Atmos track I doubt I’ll buy the 4K.

Thought it was thrilling and genuinely scary.
Click to expand...

Ditto, even though I’m not a fan of the “found footage” genre.
You must log in or register to reply here. 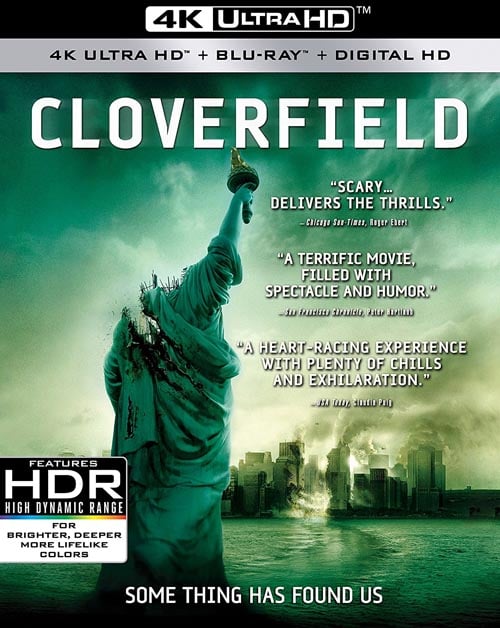