Disney’s new “Signature Collection” of 1950’s Cinderella also carries the moniker of “Anniversary Edition,” so I guess this release is in honor of the film’s 69th anniversary.

Matt Hough reviewed the Diamond Collection release of Cinderella on Blu-ray for Home Theater Forum in 2012 and his review of the film is included below:

Disney’s return to feature length animation happened with 1950’s Cinderella, a do-or-die project for the studio which, like Snow White before it, rescued a company teetering on the brink of collapse. And leave it to Disney and his collaborators to take a centuries old story and make it their own while retaining the gist of the fairy tale’s charm and enhancing it with their own kind of magic. Then and now, Cinderella is the very essence of what a fairy tale should look like, sound like, and inspire in the child within us all.

The age-old story of the unhappy lass enslaved by her wicked stepmother and prevented from going to a ball where the prince is searching for a potential bride only to be rescued by a fairy godmother who enables her wish to come true, inevitably enchant the prince, and eventually win him is all retained in this Disney version with the stepmother being made unusually cruel and demanding and the stepsisters intolerably selfish and grasping. But Disney’s genius comes with the enhancements to the film’s core (and relatively brief) story. In patented Disney style, he’s added mice and birds and the family’s aging horse and dog to assuage Cinderella’s loneliness and heavy burdens. And, of course, the team has added a sprightly song score to also add lilt and lyricism to the proceedings. All of these decisions make Disney’s Cinderella unique and have kept it, despite many live action remakes (The Glass Slipper, Ever After) and musical versions (Rodgers and Hammerstein’s comes immediately to mind), foremost in the memories of most moviegoers.

The invented mice characters, in fact, not only occupy a good percentage of the screen time and have for themselves one of the score’s most delightful tunes (“The Work Song” for the brilliant sequence where the mice and birds work together to make a dress for Cinderella to wear to the ball), but they also play a part in some of the story’s most dramatic moments (just watch the climactic sequence where Jaq and Gus-Gus struggle to get the key to Cinderella’s locked turret room in time for her to escape and try on the glass slipper and not feel yourself on the edge of your seat) and like the dwarfs in Snow White carry much of the heart and soul of the movie. They also have extended sequences with another inspired creation for the movie, their nemesis Lucifer the cat who’s a constant thorn (claw?) in their sides adding comedy touches to elevate some of the oppressive feel that the stepmother (in the imperious magnificence of Eleanor Audley) and stepsisters add with their constant sniping, sneering, and menace.

But Cinderella isn’t a supporting character in her own movie. She gets three superb ballads: “A Dream Is a Wish Your Heart Makes” to open the picture and show her optimism amid the dour household, “Sing Sweet Nightingale” in counterpoint to her sister’s bellowing singing lesson and later harmonizing with herself in a vividly creative sequence with soap bubbles, and “So This Is Love” sung at the ball as she’s falling into rapturous love with the prince (sung by Mike Douglas but spoken by William Phipps). In the loving care of Ilene Woods as Cinderella, the songs are magical with her sweet, effortless voice velvety smooth and dreamy as she goes from hope to despair to fulfilled love.

Because of Disney’s shaky financial condition, Cinderella doesn’t have the showy, highly detailed animation that one finds in Fantasia, Pinocchio, or Bambi. But that’s one of its strengths: more is done with less as looming shadows and minimal painted backgrounds sometimes make for more evocative moments as when Cinderella runs weeping into the garden after being denied a chance to go to the ball. It’s spare but effective especially since this leads into the fairy godmother sequence where the always wonderful Verna Felton’s warmly scattershot ramblings and the song “Bibbidi Bobbidi Boo” allows the animators to go to town and create magic before our eyes that’s visually spry and special.

This appears to be the same transfer used for 2012’s Diamond Collection. As Matt noted in his review:

The film is presented in its original theatrical aspect ratio of 1.33:1 and is offered in 1080p resolution using the AVC codec. Sharpness is always consistent, and the color saturation levels are simply superb with some muted tones amid splendidly vivid hues always occupying the frame with parity and without clashing. Black levels are pure and true. There is no banding to be seen anywhere within the frame, and the entire movie rather sparkles. The film has been divided into 24 chapters.top

The same sound mixes from the Diamond Collection are repurposed here:

The disc offers the original theatrical soundtrack in a DTS-HD Master Audio 1.0 mix or in a slightly opened up DTS-HD Master Audio 7.1 enhanced sound mix. The surround mix really only spreads some of the delightful Oliver Wallace and Paul Smith background score and the Jerry Livingston-Mack David-Al Hoffman tunes’ orchestrations into the front and rear channels with singing voices rooted to the center channel, but the enhanced mix is never overpoweringly stereophonic; it’s all been done with a very light, unassuming touch. The original mono mix sounds fine but is just a bit underwhelming by comparison. It’s good that it’s there for purists.

Disney’s Signature Collection edition of Cinderella adds two new special features, plus ports over many of those found on the previously released Diamond Collection. The film can be viewed in a pillar-boxed 1.33:1 Academy ratio presentation or in DisneyView where the black bars on the left and right of the screen are filled with artwork. Missing in this edition are Disney Second Screen and the short Tangled Ever After.

**NEW** In Walt’s Words: The Envisioning of “Cinderella”: This is a picture-in-picture presentation of the film with production stills, storyboards, and concept art plus a “commentary” track simulating pitch sessions in Walt Disney’s office. This feature is accessible from the Play sub-menu.

**NEW** Try This Trivia On For Size (1080p; 4:48): Ruth Righi and Ava Kolker from Disney Channel’s Sydney to the Max run through various pieces of trivia. Clips from the movie have been cropped to fill your 16:9 display.

DVD Copy: The movie in 480p with both Dolby Digital 5.1 and 1.0 mono audio tracks. The Audio Menu contains an obvious typo, indicating that the mono soundtrack is in DTS-HD MA 1.0 (a format not supported on DVD).

If you already own the previous Diamond Collection of Cinderella, the only noteworthy new feature is the In Walt’s Words PiP commentary track plus a digital copy. For those that missed out, this new Signature Collection edition is your chance to pick up this classic Disney animated feature. 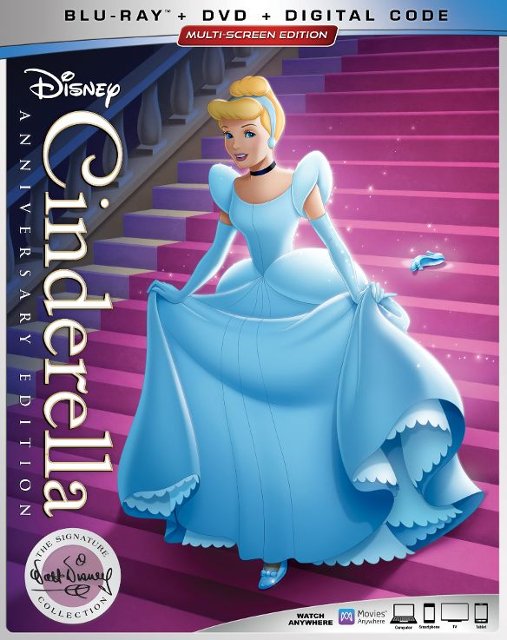