Forum List What's new Dark Style Change width
Log in Register
What's new Search
Menu
Log in
Register
Navigation
Install the app
More options
Dark Style
Close Menu
Posted on August 21, 2018 by Josh Steinberg
You are using an out of date browser. It may not display this or other websites correctly.
You should upgrade or use an alternative browser.
James Caan and Marsha Mason star in director Mark Rydell’s 1973 character-driven drama. 4 Stars

Director Mark Rydell directs this 1973 character study, about a Navy sailor (played by James Caan) who meets with a prostitute (played by Marsha Mason) while on shore leave to address a medical issue. As the sailor finds himself facing a growing bundle of bureaucratic snafus that keep him from returning to his ship, he finds himself falling in love with someone who may not be able to return his feelings.

Cinderella Liberty takes the cliched “hooker with a heart of gold” trope and flips it on its head, creating something both more unique and more moving than the cliche might allow. Featuring sensitive direction from Mark Rydell and two powerful performances from leads James Caan and Marsha Mason, the film is a wonderful character study that does an excellent job of bringing those characters to life. In lesser hands, the film could have easily turned out either mawkish or distasteful, but instead, is thoughtful and affecting.

James Caan stars as John Baggs, a career Navy sailor who is temporary reassigned to a Seattle base as he undergoes a minor medical procedure. Unfortunately for him, what was supposed to be a quick detour turns into a major inconvenience when the Navy loses his paperwork. Without an official record for Briggs, he’s unable to return to his ship, and is forced to stay at the base while the bureaucracy sorts itself out. (The title Cinderella Liberty comes from Baggs only being allowed to venture off the base until midnight each day.) While visiting a local bar, he meets Maggie (Marsha Mason), a pool hustler who also “entertains” sailors on the side. While visiting Maggie’s apartment for a rendezvous, Baggs realizes that she has a bi-racial ten year old son, Doug (personified in a wonderfully unsentimental performance by Kirk Calloway). As Baggs continues to spend time with Maggie, he falls not only for her, but also wants to provide a better life for her son. Meanwhile, as the paperwork keeps getting delayed, Baggs becomes friendly with the base’s Master-at-Arms (Burt Young), and tries to find an ex-sailor (Eli Wallach) who owes him a debt.

What makes the film work especially well is its refusal to give into easy sentimentality. While Maggie is initially happy to have the extra support from Baggs, thirty years of hard living and bad habits don’t go away overnight, and she bristles at his attempts to reform her. Nor is Doug immediately happy to have a new and uninvited father figure in his life. Baggs must earn his way into their hearts and lives, a prospect which sounds much easier than it actually is. But despite the repeated rejections, Baggs keeps trying, convinced that he can provide a stability that’s been missing from Maggie and Doug’s lives. It’s much easier for Doug to come around to liking Baggs; no one has ever paid him this kind of attention before. But Maggie has led a hard life, with more hardship on the horizon, and for every step forward she takes, she ultimately stumbles two steps back.

The performances here are exemplary, and reason enough to see the film. As Baggs, James Caan does some of his best work. He’s cynical and streetwise, with a playful sense of humor, but it soon becomes apparent that there’s a tremendous amount of decency hiding beneath that exterior. Caan is instantly likable from the first moment he steps into the frame, and his performance deepens that likability as the film progresses. Marsha Mason, in her first starring role, is a revelation. She presents Maggie as someone who wears so many masks in her day-to-day existence that she’s lost sight of which one is her true face. Her tougher exterior protects a vulnerability; the possibility of being emotionally hurt is a greater fear for her than any of the indignities or physical struggles life might throw in her way. Mason has an ability to reveal these vulnerabilities to the audience without the character being fully aware of these revelations. As Mason’s son, Kirk Calloway is fantastic. He’s a child actor who doesn’t behave like a child actor; instead, he allows his character to simply be without telegraphing that he’s acting. The supporting work is equally notable. Burt Young and Eli Wallach both do nice work, imbuing their characters with a sense of history and experience that tell us more about them than any bit of dialogue ever could. Watch out for an early appearance from Bruno Kirby as one of the men stationed on the base who crosses paths with Caan.

Behind the camera, director Mark Rydell handles the action and the story beautifully and with great sensitivity. Just as no one in the cast overacts, Rydell doesn’t try to be too fancy with work, trusting his performers to bring the script to life and giving them the space to make that happen. Darryl Ponicsan’s screenplay, an adaptation of his own novel, is packed with memorable characters and great dialogue. Vilmos Zsigmond’s cinematography is equally notable, whether it’s the wider portrayal of Seattle as a worn out city in need of renewal, or smaller moments with the characters trying to find their way through the long and dark nights. Zsigmond’s imagery perfectly matches the tone that Rydell is trying to capture in each and every scene. It’s the kind of cinematography that doesn’t draw attention to itself on first glance, but on greater examination is impressively nuanced. Also impressive is the score from John Williams, which is always exactly right for each of the film’s varied moods.

Cinderella Liberty is an expertly-made film which represents some of the best work by its cast and crew. The cast trusts the director enough to show real vulnerability, and the director trusts the audience enough to tell the story honestly. The best compliment that can be given to the film is that it feels real.

Cinderella Liberty is presented in its original aspect ratio of 2.35:1 in a new 4K transfer provided by Twentieth Century Fox. The film looks wonderful; it’s perfectly clean and steady, with nary a hint of age related wear or artifacts. Color appears natural and accurate, and sharpness and clarity are excellent. The transfer is wonderfully film-like, with natural looking grain. Whether it’s an overcast daytime exterior, or an intimate and shadowy nighttime setting, the cinematography of Vilmos Zsigmond truly shines on this disc.

Twilight Time offers two lossless options on this disc, both in DTS-HD MA. The first track is listed merely as being 2.0, but frustratingly, neither the disc menus nor liner notes provide an explanation of the track’s original format or what it is meant to represent. A secondary track, listed as 1.0 in the menu, is actually a 2.0 monaural track. Both sound excellent, with no signs of hiss, distortion or any other age-related artifacts. Dialogue is well-recorded and easy to discern in the mix. The track labeled as being 2.0 in the menu offers a little bit more separation and allows the music some extra breathing room, but the mono option is still quite good.

Audio Commentary with Director Mark Rydell – This is a pleasant track that, while not particularly deep, is still worthwhile for the director’s recollections. He’s filled with praise for his cast, particularly Caan and Mason, and spends a great deal of time appreciating their acting choices. But it’s also apparent that Rydell has not seen the film in quite some time, and he does occasionally revert to narrating the onscreen action. Usually, though, he’s able to tie that narration into an observation about a particular performance or technical element, which ultimately makes the track worthwhile.

On Location with Mark Rydell (9:36, SD) – In this vintage featurette, director Rydell explains his directing process; also included in the piece are some interviews with the cast shot during downtime on location work.

Original Theatrical Trailer (3:23, SD) – The trailer has been cropped to 1.85:1 widescreen, letterboxed within a 4×3 frame. Featuring some of the film’s more comedic and romantic moments, the trailer downplays some of the more dramatic elements but probably gives away too much of the story.

TV Spot (1:05, SD) – This TV spot features footage cropped to a 4×3 ratio, which has then been stretched into a 16×9 frame. While not a great representation of the film’s content, its inclusion here is nonetheless appreciated.

Cinderella Liberty is a great character study, featuring outstanding performances from James Caan and Marsha Mason and sensitive direction by Mark Rydell. The Twilight Time disc offers a fantastic new 4K-sourced transfer along with pristine audio, a commentary track, and the customary isolated score. As moving today as it was 45 years ago, Cinderella Liberty is worth revisiting.

The stereo option is most likely a Fox faux-stereo job. When Fox released DVDs they routinely offered a fake stereo option which wasn't a proper remix but just the mono track put through a stereo synthesizer. Recently Twilight Time has begun offering these fake stereo tracks as an option on their Blu-ray releases. It's best just to avoid them and listen to the original mono track.

Mark, I suspect you're right. I just don't understand why Twilight Time can't include this information in either their liner notes or on the disc itself, as many other labels choose to do. I know there are times where it appears that one of the mixes is mono and the other is fake stereo, while there are other times when they include a 5.1 and a 2.0, and it seems that the 2.0 track might actually be a matrixed surround track, etc.

It's probably a small nitpick, but they're such a class act about everything that they do, and so thorough in their presentation of audio-only bonus material like isolated score tracks, that it's a little bit mystifying to me why they don't make that information more readily available.

I would never make a purchase decision or recommendation over that omission, but I think their audience would appreciate knowing the provenance of the different audio options.

Another fine review Josh! I personally hold this film in high regard, as I do with most of Mark Rydell's films. I will always associate this film with James Caan's best work, and Marsha Mason is wonderful.

For anybody who might be interested in Mark Rydell's television work, I recently posted about the episode he directed of the 1963 James Franciscus/Dean Jagger drama series Mr. Novak, "Sparrow on the Wire", featuring Mike Kellin and a young Beau Bridges, over in the TV on DVD forum. This episode was a very powerful and compelling story on Anti-Semitism. Of course, season one of Mr. Novak has not yet been released by WAC, but is said to be in the works. My screen caps from this episode were taken from my home made DVDs originally derived from TNT recordings in 1988-90.
You must log in or register to reply here. 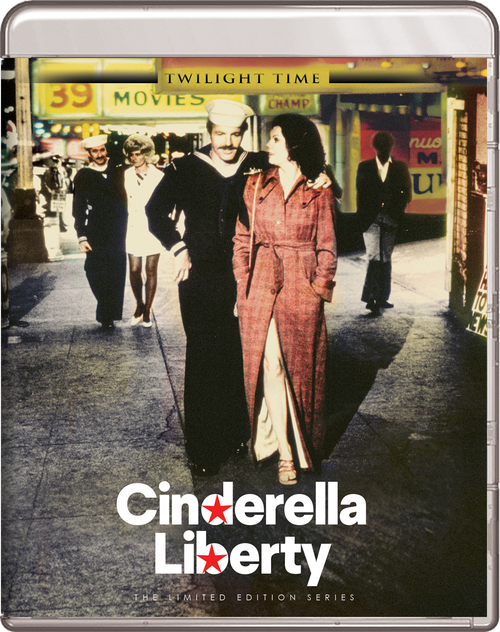