Forum List What's new Dark Style Change width
Log in Register
What's new Search
Menu
Log in
Register
Navigation
Install the app
More options
Dark Style
Close Menu
Posted on August 31, 2017 by Matt Hough
You are using an out of date browser. It may not display this or other websites correctly.
You should upgrade or use an alternative browser.
Predictable comedy-drama covers very old territory. 2.5 Stars

If there was one moment in Xavier Manrique’s Chronically Metropolitan that felt true and genuine rather than manipulative and artificial, it might actually generate some authentic viewer interest and involvement.

If there was one moment in Xavier Manrique’s Chronically Metropolitan that felt true and genuine rather than manipulative and artificial, it might actually generate some authentic viewer interest and involvement. Instead, the movie moves forward in its foul-mouthed, generally dislikable way consistently refusing to come to life with characters we neither like nor want to spend much time with. Some good actors are sadly wasted in this pointless millennial-focused dramedy.

Budding author Fenton Dillane (Shiloh Fernandez) returns to his New York City Upper East Side home after fleeing to San Francisco when a celebrated short story of his based on his friends and true-life experiences riles all of his acquaintances making him a virtual pariah even within his own family. An accident involving his acclaimed author/father (Chris Noth) with some underage students serves as a pretext to come back to the city, but he’s really here to get back together with his ex-girl friend Jessie (Ashley Benson), but he really can’t count on his mother (Mary-Louise Parker), sister Layla (Addison Timlin), or his former friend Johnny (Josh Peck) to help him repair the rift that his story and the time apart has caused. Jessie, he learns, is about to marry wealthy British art gallery owner Victor (Chris Lowell), but he’s certain she’s making a mistake and choosing the wrong man to marry.

The screenplay by Nicholas Schutt feels completely familiar and cliché-ridden (love-smitten youth tries to intercede in the wedding plans of the one he loves), and none of the characters he has created make much of a positive impression. The millennials are all heavy smoking and cursing malcontents (Johnny after failing at finance now sells pot for a living; Layla is living off her parents with no exploitive skills; Fenton has writer’s block and can’t finish the novel his publisher is eager to receive), and the older adults are truly off the rails (the father a notorious womanizer with his student protégés as the objects of his lust; the mother hides her pain in a swirl of alcohol and drugs and her own affairs). We don’t necessarily have a rooting interest for Fenton to succeed in derailing Jessie’s impeding nuptials, so it’s somewhat infuriating when he plants doubt in her mind with an impromptu session of sex on the gallery floor (director Xavier Manrique’s one notable directorial motif has his camera rolling around on the floor with the uninhibited couple). But nothing feels really developed or of a piece here. All of the major characters who are undergoing life crises aren’t given adequate expansions of their narratives to make the ending work.

While his acting is certainly better than adequate, Shiloh Fernandez never really convinces us that he has a writer’s literary panache (we see his short story in The New Yorker but spend most of the movie’s moments with him “writing” merely watching him stare at a blinking cursor on his MacBook). Addison Timlin’s Layla is potty-mouthed and rather disagreeable. Josh Peck as Johnny has a moving moment confronting Fenton about his depiction in the short story “The Birthday Party” but is otherwise a forgettable presence. Ashley Benson’s Jessie never seems to quite capture her character’s split personality of anger, hurt, and love to a degree that would make it believable or identifiable. Chris Lowell as the Englishman Victor does a passable British accent. Chris Noth takes over every scene he’s a part of with a broad, blasting machismo as the uninhibited author Christopher Dillane. Mary-Louise Parker doesn’t do enough with her character’s outrage burying it under a mantel of self-pity and self-medication.

The film’s 2.40:1 theatrical aspect ratio is faithfully rendered in this 1080p transfer using the AVC codec. Sharpness is generally pleasing without being eye-poppingly sharp. Color is well under control with believable skin tones. Contrast is somewhat erratic with a milkiness sometimes encroaching on a shot and then absent in a successive shot in the same sequence. The movie has been divided into 20 chapters.

The DTS-HD Master Audio 5.1 sound mix is more than adequate for the small nature of the storytelling, but the ambiance of New York City is rarely captured on the streets. There is better surround activity at a party sequence in the early going. Dialogue has been recorded well and comes through nicely in the center channel. Angelo Milli’s music gets a decent spread through the fronts and rears without making much of an impression.

Alternate Ending (3:50, HD): the theatrical ending is far superior to this.

Deleted Scenes (2:48, HD): two scenes may be watched in montage or separately.

Chronically Interviewed: Behind the Scenes (8:01, HD): the four major young stars of the movie describe their characters and their delight of working with their fellow cast members. Those participating are Josh Peck, Addison Timlin, Ashley Benson, and Shiloh Fernandez.

Millennials coping with personal and professional crises are the focus of first time director Xavier Manrique’s Chronically Metropolitan. The cast is fine even with the less than fulfilling story and characters they’re working with here. The Universal Blu-ray offers the movie with very good picture and sound as compensations. 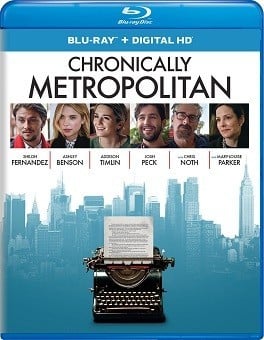