Forum List What's new Dark Style Change width
Log in Register
What's new Search
Menu
Log in
Register
Navigation
Install the app
More options
Dark Style
Close Menu
Posted on November 16, 2018 by Todd Erwin
You are using an out of date browser. It may not display this or other websites correctly.
You should upgrade or use an alternative browser.
Slow and nearly sweet as honey 4 Stars

Christopher Robin leaves the Hundred-Acre Wood, grows up, goes to war, has a family, and becomes a workaholic, and it’s up to Winnie the Pooh and friends to come to the rescue.

As Christopher Robin opens, the young titular character bids farewell to his animal friends from the Hundred-Acre Wood, Winnie the Pooh (Jim Cummings), Piglet (Nick Mohammed), Rabbit (Peter Capaldi), Owl (Toby Jones), Kanga (Sophie Okonedo), Roo (Sara Sheen), Eeyore (Brad Garrett), and Tigger (Jim Cummings) before heading off to boarding school. As he grows up (now played by Ewan McGregor), he meets his future wife Evelyn (Hayley Atwell), goes off to fight in World War II, arrives back in London a family man, and quickly becomes a workaholic trying to support his family under the employ of Winslow Luggage. Due to sluggish sales, Christopher is asked to work over the weekend by the company owner’s son, Giles Winslow (Sherlock’s Mark Gatiss), to determine where budgets need to be cut and who needs to be let go, even though he had planned a family outing at his childhood countryside cottage. Placing work before his family, he sends Evelyn and their daughter Madeline on ahead of him. Back in the Hundred-Acre Wood, Pooh awakens to find his friends missing, entering the old knothole Christopher Robin used to appear from, finding himself suddenly in a London park near the Robin’s home, where Christopher finds him on a park bench. Pooh becomes a distraction rather quickly, making a mess of the home, and Christopher grabs a train to hopefully drop Pooh off at the Hundred-Acre Wood and catch the next train back to London. Things do not go as planned, as Pooh disappears, sending Christopher on an adventure that reunites him with his childhood pals.

Although Christopher Robin has a running time of 104 minutes, it felt much longer, closer to 2 1/2 hours, mostly due to its rather slow pace and relatively dreary first half. The pacing is somewhat expected, as A.A. Milne’s classic stories were never exactly action-packed. There is a darkness (both in tone and greyish imagery) for much of that first half, which may test the patience of its younger audience. The performances are all very good; Ewan Mcgregor is perfectly cast as Christopher Robin, and casting Jim Cummings and Brad Garrett who previously voiced Pooh, Tigger, and Eeyore in the more recent animated adaptations brings an instant familiarity to the characters. The visual effects are almost seamless in the creation of the Hundred-Acre Wood characters, basing Pooh, Tigger, Eeyore, Piglet, Kanga, and Roo on post-WWII stuffed animals and the artwork by original illustrator E.H. Shephard, with Rabbit and Owl appearing as slightly caricatured photo-realistic animals.

Christopher Robin was beautifully photographed on 35mm and 65mm film by Matthias Koenigswieser, and Disney’s Blu-ray captures it quite nicely in this AVC-encoded 1080p transfer that retains the film’s 2.39:1 aspect ratio. Colors are purposefully muted for the first half, becoming slightly more vivid as the blustery skies diminish in the Hundred-Acre Wood and everyone travels back to London. Fine detail is excellent, where even the slight movement of the stuffed animal’s digital hair in the wind comes through with no noticeable compression artifacts. Contrast is also excellent, with deep blacks and milky whites that still offer a great amount of depth and detail, especially in the foggy Hundred-Acre Wood early on.

The DTS-HD Master Audio 7.1 track is very engaging, more than expected for a film of this type. Sounds are often placed all around the room during the scenes within the Hundred-Acre Wood. The brief explosions heard in the WWI sequence are nicely accentuated through the use of LFE. Dialogue is clear and understandable throughout.

Christopher Robin comes with a handful of all-too-brief bonus features.

Pooh And Friends Come To Life (1080p; 3:16): A look at how the Hundred-Acre Wood characters were brought to life through visual effects.

We Were Very Young (1080p; 3:51): This quick look at the real Christopher Robin (Milne) is a digital exclusive, available on Movies Anywhere, Vudu, and FandangoNow.

Adventure (1080p; 1:33): This behind-the-scenes trailer for the film is also a digital exclusive, available on Movies Anywhere.

Christopher Robin is a sweet yet slow tale of the human character from A.A. Milne’s classic Winnie the Pooh tales all grown up in post WWII London. Presentation is near perfect, but the special features are lacking. 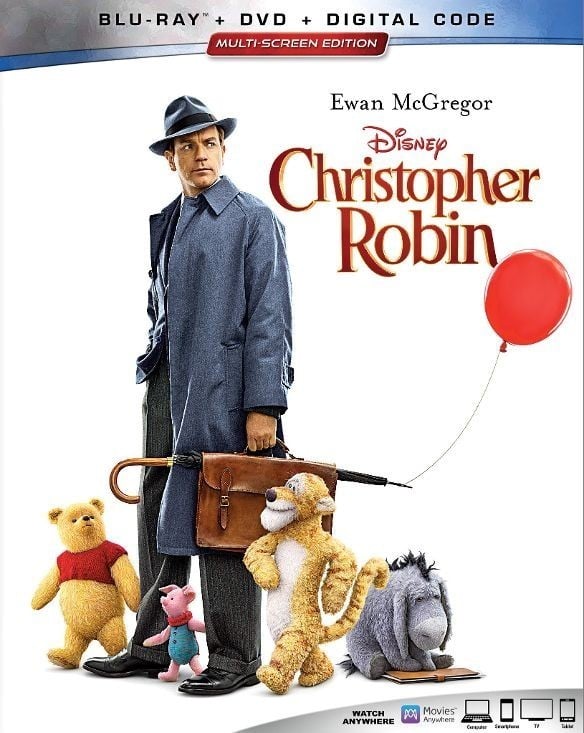