Although Christine is very loosely based on the novel of the same name, the marriage of author Stephen King and director John Carpenter, along with a talented but mostly unknown (at the time) cast, pays off with a tense and entertaining thriller.

After being let go by Universal from Firestarter due to poor box office results from his remake of The Thing, John Carpenter was given the chance to direct another Stephen King adaptation, Christine, from Polar Film, which had a production deal at Columbia Pictures. A 1958 red Plymouth Fury comes off the assembly line at a Chrysler plant, seemingly injuring one man for inspecting under the hood, another killed mysteriously for disrespecting the upholstered seats with the ashes from his cigar. Fast forward 21 years, and nerdy Arnie Cunningham (Keith Gordon) buys this same Plymouth Fury, now a real junker, from down on his luck George LeBay (Roberts Blossom), using his college funds to pay for it, despite his only friend, Dennis (John Stockwell) trying to talk him out of it. Arnie’s mother (Christine Belford) is none too thrilled about the purchase, and even forbids Arnie to park the eyesore on her property. Arnie takes the car to Darnell’s Garage, managed by the cantankerous Will Darnell (Robert Prosky), who agrees to let Arnie park “Christine” there to fix her up, but places him on a very short leash. As Artie begins to restore his beloved car, he gains some self-esteem, gets contact lenses, and a girlfriend, Leigh Cabot (Alexandra Paul). But Arnie’s obsession with Christine begins to put a strain on his relationship with his parents and Dennis, and Christine becomes jealous of Leigh, attempting to kill her while on a date at the Drive-In. When Christine is vandalized by high school bully Buddy Repperton (William Ostrander) and his gang in retaliation for being expelled, the restored car fixes herself and goes on a killing spree as Christine’s possession of Arnie continues. Investigating the murders is Detective Rudolph Jenkins (Harry Dean Stanton).

At its heart, in a demented way, Christine is a tragic love triangle, between a boy, his car, and his girlfriend. Stephen King’s novels are often difficult to condense into a two-hour movie as they are often quite dense (which is why many of the best adaptations have been TV mini-series). The screenplay by Bill Phillips takes many liberties with King’s source material, but maintains the themes and spirit of the novel, and Carpenter’s expert direction solidifies it. The performances by the film’s young and then relatively unknown cast are solid, aided by its older veteran cast of character actors.

Sony continues to impress with its handling of catalogue titles on UHD Blu-ray, and Christine is no exception. This 2160p transfer, with HDR10 high dynamic range, is simply gorgeous. Colors are much more refined and vivid, particularly Christine’s red paint job that never has any issues with banding. Detail is exquisite, from fabric textures and facial features to the translucent reflections in Christine’s highly waxed paint job. Blacks are deep and inky, yet retain minute shadow details without evidence of crushing. Natural film grain is noticeable and never obtrusive (the only exception being the Columbia Pictures logo at the beginning).

Christine was released theatrically back in 1983 with a decent Dolby Stereo mix with matrixed surround. The film was then remixed in 5.1 for its DVD and more recent Blu-ray releases (which included a lossless DTS-HD MA 5.1 track). The new Dolby Atmos mix in this UHD release builds upon that 5.1 mix, widening and deepening the soundstage, placing sounds more accurately and less discretely within the room. Heights are implored more for spatial placement than providing any discrete overhead effects. LFE is tighter and more robust, such as the throttling engine during the opening credits. Dialogue is clear and understandable throughout. The disc also includes the previous DTS-HD MA 5.1 mix from the Blu-ray and a DTS-HD MA 2.0 stereo mix, as well.

The 4K UHD contains trailers for the film, otherwise all of the special features are on the included Blu-ray edition. Sadly, the isolated music track from the Twilight Time Blu-ray release has not been included.

Christine Blu-ray
Audio Commentary with Director John Carpenter and Keith Gordon: An interesting and lively track as most commentaries by Carpenter are. The two reminisce about the production and Gordon often complements Carpenter as being somewhat influential on his own directing career.

Digital Copy: An insert contains a code to redeem a digital copy of the film on Movies Anywhere. Although my code redeemed as “4K” on the Movies Anywhere service, the movie is only available in 4K on Google Play Movies and FandangoNow. Vudu and Amazon Prime Video only offer the movie in HD. I do not own an Apple TV or an XBOX One so cannot confirm the resolutions provided on iTunes and Microsoft Movies, respectively.

Sony’s track record regarding catalog titles on the 4K UHD Blu-ray format has been stellar, and that reputation continues with Christine. Excellent video and audio presentation, plus the original trailers for the film. The extras on the included Blu-ray are nice, but I wish Sony had included the commentary on the 4K UHD disc. 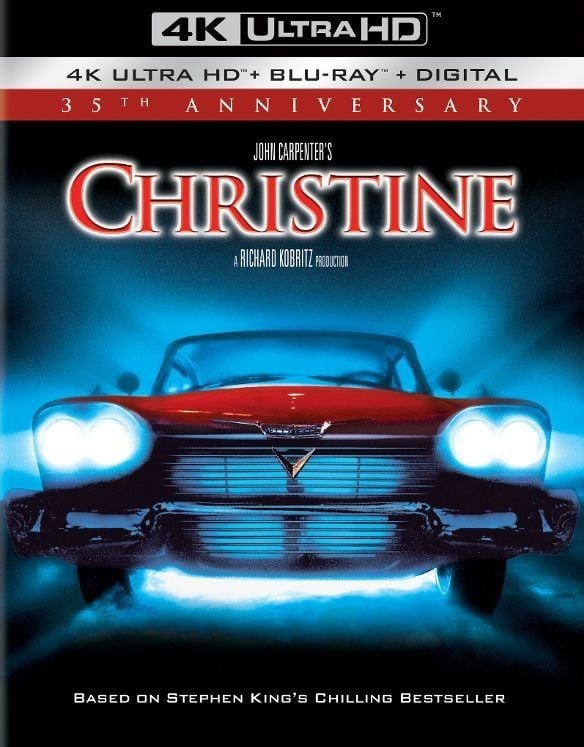