Average bittersweet romantic comedy with some chuckles and some light drama. 3 Stars

Annie Hall: meet your kissing cousin: Joan Micklin Silver’s Chilly Scenes of Winter, a bittersweet romantic comedy featuring lovers who meet, have a fun few months together, and part with the male side of the equation desperately and lovingly forlorn.

Annie Hall: meet your kissing cousin: Joan Micklin Silver’s Chilly Scenes of Winter, a bittersweet romantic comedy featuring lovers who meet, have a fun few months together, and part with the male side of the equation desperately and lovingly forlorn. Fine actors punctuate the up and down nature of the script which pushes its preciousness somewhat past the breaking point. Still, for a film that few have seen or even heard of, it’s worth a look.

After spending two idyllic months with Laura (Mary Beth Hurt) with whom be becomes besotted, Charles Richardson (John Heard) must learn to do without her as a part of his daily life when she returns to her husband (Mark Metcalf). For a year, Charles can’t put Laura out of his mind remembering special moments the two shared during their time together, and when he finally hears that she has left her husband seemingly for good, he’s hopeful that maybe now they can start a new life together.

Known during its premiere 1979 engagements as Head Over Heels (the more descriptive if less metaphoric title), the film has now returned to the title of the original source material novel by Ann Beattie Chilly Scenes of Winter, the screenplay by director Joan Micklin Silver which uses the flashback approach to telling the story. We’re treated to some of the couple’s good times: their meet cute in a records vault, his introduction to her barren apartment and his first gift of a rocking chair, date nights on a trampoline and at a porno film (her idea, not his) and later painful scenes without her as Charles’ obsession with Laura makes his life miserable as he tries to figure out how he can make things work out for the couple. The story and characters become rather trying before the film wraps as his mania for her and her obvious disinterest force the viewer to feel as if he’s spinning his wheels. While director Silver does capture some rapturous scenes of winter (the movie was filmed in Utah), there are two entire uninteresting subplots with Charles’ unbalanced mother (played by veteran Oscar-winner Gloria Grahame) and her second husband (Kenneth McMillan) struggling with her mental problems and with Charles’ best friend Sam (Peter Riegert) out of work and completely useless around the house that add to the tiresomeness of the film’s second half.

John Heard and Mary Beth Hurt have wonderful chemistry together and perform superbly in tandem and separately. Heard is especially appealing as the central focus of the movie (the screenplay has the character breaking the fourth wall and talking to the audience on five separate occasions; only an actor with real innate charm could get away with this) and comes closest to not wearing out his welcome. Peter Riegert has a subdued kind of moxie that makes his presence less of a trial than it might have otherwise been. Nora Heflin has some special moments as Charles’ worshipful secretary Betty pining for the least drop of attention while he thinks only of Laura. Kenneth McMillan is appealing, too, as Charles’ stepdad trying to find a common ground with his stepson and stepdaughter Susan played by Tarah Nutter. Gloria Grahame is fine in her role, but it seems to be a part of some other movie, and her purpose in the film never seems well defined unless it’s simply to add another source of frustration to the well-meaning character of Charles. There is also a delightful running gag sequence with Charles and blind candy vendor Allen Joseph that switches up during the movie and doesn’t become predictable.

The film’s original theatrical aspect ratio of 1.85:1 is faithfully reproduced in this 1080p transfer using the AVC codec. Sharpness is just fine throughout, and the film’s grain structure has been respected and brought forward into this transfer. Color is solid and realistic with lifelike skin tones. Black levels aren’t the deepest, but they’re more than adequate, and contrast has been consistently applied throughout. There are no age-related artifacts of wear and tear visible with this encode. The movie has been divided into 24 chapters.

The sound mix is DTS-HD Master Audio 2.0 mono, and it’s a solid offering with dialogue well recorded and mixed with surety with the ambient atmospheric effects and Ken Lauber’s jazz score with a couple of pop tunes courtesy of Janis Joplin and Bette Midler. There is no problem with age-related hiss, crackle, or pops.

Audio Commentary: writer-director Joan Micklin Silver and producer Amy Robinson carry on a not particularly interesting give-and-take with a few behind-the-scenes tidbits offered but surrounded by lots of silent periods.

Isolated Score Track: presented in DTS-HD Master Audio 2.0. Most of the instrumental music is mono, but Bette Midler’s “Skylark” seems to be in stereo.

Six-Page Booklet: contains some color stills, original poster art on the back cover, and film historian Julie Kirgo’s enthusiastic appraisal of the movie.

Chilly Scenes of Winter has enough charm and appeal to warrant a look, but it’s never quite as funny or as memorable as other bittersweet romantic comedies of the same period. There are only 3,000 copies of this Blu-ray available. Those interested in purchasing it should go to either www.twilighttimemovies.com or www.screenarchives.com to see if product is still in stock. Information about the movie can also be found via Facebook at www.facebook.com/twilighttimemovies. 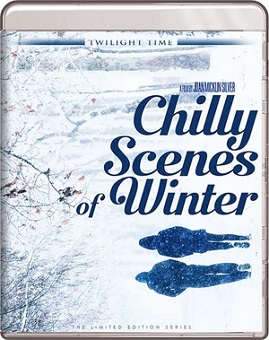