Children of Divorce, Frank Lloyd’s 1927 melodrama of thwarted loves amid the privileged, may have a story that reeks of early 20th century romantic twaddle, but it features two of the late silent era’s most noteworthy stars: Clara Bow and Gary Cooper, one whose career had only a few years left to play out and one whose career was just getting started.

Children of Divorce, Frank Lloyd’s 1927 melodrama of thwarted loves amid the privileged, may have a story that reeks of early 20th century romantic twaddle, but it features two of the late silent era’s most noteworthy stars: Clara Bow and Gary Cooper, one whose career had only a few years left to play out and one whose career was just getting started. It’s a fascinating time capsule of silent screen stardom at its height with the players servicing a rather tepid story not up to their gifts.

At a Paris convent that takes in children of the wealthy who are too busy globe-trotting to bother with their offspring, newcomer Kitty Flanders (Joyce Coad) seeks the friendship of Jean Waddington (Yvonne Pelletier) who’s used to being without her parents around her, and the two become inseparable. They’re introduced to the happy-go-lucky Ted Larrabee (Don Marion) who’s also a child of divorce but not abandoned by his wealthy father. Ted takes an instant liking to Jean and vows one day to marry her. Years later, Kitty (Clara Bow) is living on a pittance and knows she must marry for money since she has none of her own and has a romantic interest in penniless Prince Vico (Einar Hanson) also looking for a wealthy wife to restore his titled family’s finances. Jean Waddington (Esther Ralston) is now a wealthy debutante and is delighted to meet after a long absence Ted Larrabee (Gary Cooper), playboy-about-town who spends money like water. Kitty had always harbored a little crush on Ted herself, but he only has eyes for Jean, and Jean won’t consider marriage until Ted quits his frivolous lifestyle and does something with his engineering degree. Kitty manages to tear Ted away from his work for an all-night party which ends in a drunken Ted marrying Kitty. Now Kitty has the Larrabee money and assumes it and Ted can make her happy, but Ted feels trapped in the marriage and throws himself into his work ignoring Kitty and their new baby.

Hope Loring and Louis D. Lighton have written the screenplay adapted from a story by Owen Johnson, but the narrative is fairly predictable once we get the character dynamics set down from the early childhood scenes of the three protagonists, and it only gets more preposterous the longer it runs. With Kitty and Prince Vico wringing their hands over their lack of money (it never seems to occur to either of them to go to work), it’s pretty obvious that the story will find a way to keep the true lovers Jean and Ted apart through one means or another, and that’s exactly what happens. Once Kitty marries Ted and finds herself miserable, Prince Vico is out of the picture because his religion won’t allow him to seek a woman who’s divorced. Jean declares she’ll never marry, but by the film’s climactic scenes, she’s headed down the aisle with Prince Vico despite not loving him (what happened to her declaration of never marrying?) before Kitty’s drastic steps to right the wrong she’s committed in marrying someone she didn’t love just for his money. Frank Lloyd’s direction (and Josef von Sternberg directed retakes which allegedly remade much of the movie) moves the story along and gets the most out of his performers despite their clichéd characters. Ted’s entrance back into the lives of Kitty and Jean at a garden party is a flamboyant announcement of a star’s arrival, galloping onto the grounds with hair flopping and his strapping frame catching all of the ladies there breathlessly unawares. And because we’re dealing with upper class lives, the sets throughout are enormous (even the convent where the children of the wealthy are brought seems like a cathedral inside), and the gowns donned by the women are continuously exorbitant.

At the time one of the biggest stars in Hollywood, Clara Bow displays her range throughout the movie with her face registering effortlessly the longing, the jealousy, the affection, and the despair which her character undergoes through the film. Esther Ralston is more limited in emotional responses playing a restrained character who braves through life’s disappointments with a stiff upper lip and her chin held high. Gary Cooper has charisma to spare as the joyous early Ted who later on is weighed down by his unhappy marriage and frustration thus veering more toward a one-note characterization of misery. The three children chosen to play the younger versions of Bow, Ralston, and Cooper are all superb with Joyce Coad an especially vivid Kitty and Yvonne Pelletier’s quiet, reassuring Jean very much a reflection of how Esther Ralston plays her as an adult. Yes, that’s future Hollywood gossip columnist Hedda Hopper as Kitty’s frivolous mother who drops her off at the convent in the opening scene.

The restoration of this almost ninety-year old movie must be credited with making the movie imminently watchable even with some still unresolved problems. There are still some scratches present and some spotting and dirt that has been baked into the negative, and the nitrate deterioration that is very obvious about an hour into the movie simply means that imagery is unrecoverable. Still, sharpness is pleasing for much of the movie, and the grayscale does often feature crisp white levels and deep blacks. The 1080p transfer using the AVC codec adheres to the movie’s original aspect ratio. The intertitles are always easy to read despite the dirt and scratches. The movie has been divided into 9 chapters.

Twelve-Page Booklet: contains some stills from the movie, excerpts from David Stenn’s Bow biography Runnin’ Wild covering the making of the movie,  film historian Larry Smith’s essay on the film’s restoration, Rodney Sauer’s discussion of the music used for the soundtrack, and Hugh Munro Neely writing about his documentary of Clara Bow on the disc.

Despite a melodramatic premise and execution, Children of Divorce offers many reasons for watching it: interesting stars, a lavish production, and a first-rate Blu-ray package offering a documentary on the star and other essays full of interesting facts about the film and the people connected with its production.

My copy is on the way. Thanks for the review! 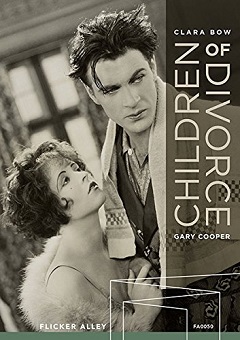