Forum List What's new Dark Style Change width
Log in Register
What's new Search
Menu
Log in
Register
Navigation
Install the app
More options
Dark Style
Close Menu
Posted on July 8, 2016 by Matt Hough
You are using an out of date browser. It may not display this or other websites correctly.
You should upgrade or use an alternative browser.
Minor Americana slickly handled. 3 Stars

Chicken Every Sunday is nostalgic Americana of rather minor significance. Unlike something masterful like Meet Me in St. Louis or Life with Father, the movie works its simple charms well enough without bombast but with no great effectiveness either.

Sentimental Hollywood-style Americana doesn’t come much more outrageously predictable than George Seaton’s Chicken Every Sunday, and yet even with its obviousness, a fine cast and up-to-standard pacing keep things hopping amid its dozen-or-so characters delivering an entertaining stew even if it is of the warmed-over variety.

Jim Hefferen (Dan Dailey) never met a get-rich-quick scheme he didn’t like, and in turn of the century Tucson, he tries just about every one of them, all of them successful but with Jim’s speculative nature, he never stays around long enough to earn any profits instead taking his capital out and investing in riskier and risker propositions. In order to make sure they keep a roof over their heads and food on their table, wife Emily (Celeste Holm) takes in a new boarder every time Jim tries a new venture, so that after twenty years, they have three children of their own (Colleen Townsend, Natalie Wood, Anthony Sydes) and a house filled with roomers. Emily can’t help delving into the personal lives of some of their tenants, and Jim gets involved with some of them, too, especially if they have money to invest in one of his ventures.

Based on a play by Julius J. Epstein and Philip G. Epstein as well as the original memoirs of Rosemary Taylor, the script for Chicken Every Sunday was written by director George Seaton in collaboration with Valentine Davies. If it’s reminiscent of I Remember Mama or Life with Father or A Tree Grows in Brooklyn, all with their mixtures of comedy and drama, it’s probably no coincidence since those were tremendously successful stories all of which made their way to the screen. The problem is that the events in this one are so familiar: from the shy, asthmatic bachelor (Alan Young) in love with the Hefferen’s oldest daughter Rosemary to the spinster teacher (Mary Field) keeping secret company with a shy scientist (Whit Bissell), the character types found in the Hefferen household are archetypal stock characters found in just about any ensemble comedy. Once you add dipsomaniac former burlesque entertainer Millie Moon (Connie Gilchrist) with her comely daughter (Veda Ann Borg) and stuffy Boston socialite Harold Crandall (William Callahan) also courting Rosemary, you’ve got the makings for another You Can’t Take It With You though apart from a late movie farcical sequence when all of the secrets get revealed at once and fisticuffs come into play, Chicken Every Sunday can’t hold a candle to that earlier comic romp. Director George Seaton does keep the various episodes moving even when the entire set-up is so outrageous (mother adds rooms for each new tenant, but where does the money for all that building come from since father never brings in a dime to the family and she saves the boarders’ rent to pay off the mortgage?), and one will do better with the movie to simply turn off the brain and just enjoy the comfy coziness of its shopworn narrative.

Fresh off of his Oscar nomination the year before for When My Baby Smiles at Me, Dan Dailey gets top billing, but at least for a change he’s not playing either a womanizing vaudevillian or an alcoholic. Instead, he’s addicted to speculation here, but he’s so confident and agreeable that the audience can (like his wife) forgive him anything. Celeste Holm is on less secure ground as the loving mother. She’s been saddled with an affectation that her character relapses into her original southern dialect when she becomes overly emotional, but it’s an affliction that is inconsistent in the performance, and Ms. Holm’s broad southern accent is fairly poor on top of everything else. Colleen Townsend is fairly colorless as the film’s ingénue though both of her suitors Alan Young and William Callahan give fine accounts of themselves. And there is other top-flight talent here, too, doing excellent work: Veda Ann Borg as the chippie, William Frawley (with a deliberately horrible toupee) as her husband, and Connie Gilchrist as her mother. Porter Hall, Whit Bissell, Roy Roberts, and Percy Helton all provide colorful support for the leading players. But Seaton has really misused the tiny Natalie Wood, who was so terrific for him a couple of years earlier in Miracle on 34th Street, in a throwaway role as the Hefferen’s youngest daughter Ruth with barely one line and only a couple of minutes of screen time despite fifth billing.

The film has been framed at 1.33:1 for this presentation. Sharpness is quite good throughout even when the transfer’s brightness varies rather considerably in the final reels. Grayscale is spot-on with rich black levels that aren’t crushed and whites that seem more or less true. But there are plenty of age-related problems with dust specks, some debris, slight scratches here and there, combing artifacts, and reel change cues which have not been removed. The movie has been divided into chapters every ten minutes so this transfer has 10 chapters.

The Dolby Digital 2.0 sound mix is decoded by Dolby Prologic into the center channel. While the dialogue is always clear and Alfred Newman’s background music score (which leans heavily on turn-of-the-century standards) and occasional atmospheric effects blend smoothly together, age-related problems with slight hiss, some hum, and occasional pops are certainly present.

Chicken Every Sunday is nostalgic Americana of rather minor significance. Unlike something masterful like Meet Me in St. Louis or Life with Father, the movie works its simple charms well enough without bombast but with no great effectiveness either.

In my opinion, Dan Dailey and Celeste Holm were two of Hollywood's finest. Anything with them is of interest to me and a film with both is of major interest. The supporting cast is also impressive. I'm sorry the picture quality deteriorates towards the end, but I'll probably buy this disc in the near future. (At present I have a large backlog of Blu-ray discs to watch)

Robin9 said:
In my opinion, Dan Dailey and Celeste Holm were two of Hollywood's finest. Anything with them is of interest to me and a film with both is of major interest. The supporting cast is also impressive. I'm sorry the picture quality deteriorates towards the end, but I'll probably buy this disc in the near future. (At present I have a large backlog of Blu-ray discs to watch)
Click to expand...

Right there with you, including having to wait to purchase this one sometime later in the year. I've spent too much this month, and it's only the 9th!
You must log in or register to reply here.

DVD Review Who Gets the Dog? DVD Review 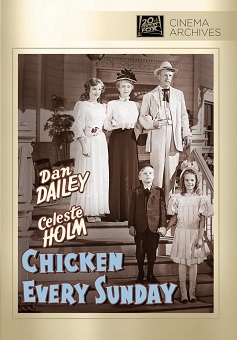