Despite its overly familiar formula, NBC’s Chicago Justice deserved a better fate, a compelling carbon copy of Law & Order that featured just as fine acting, writing, and production as the original series.

Emmy Award-winning producer Dick Wolf has brought many hit shows to NBC, and his most recent bunch of hits have all revolved around public service professions in Chicago. Chicago Fire, Chicago P.D., and Chicago Med have all brought healthy ratings to the Peacock network, so it simply made sense for Wolf to roll the dice one more time with Chicago Justice. Truth to tell, the show is more procedural and less character driven than its three siblings, but NBC made a major error in slotting it during the second half of the season on Sunday nights, one of the most difficult nights of the week to launch and sustain a new show, and the results were that even though Chicago Justice made a more than decent showing, it ended up being the lowest rated of Wolf’s four Chicago shows and was handed a cancellation notice at the end of the season.

The show’s initial episode actually came as the third act in a story that began on Chicago Fire, continued on Chicago P.D.¸and then wrapped up on the new Chicago Justice, a compelling story of a fire that breaks out at a rave, its investigation to turn up likely suspects to the arson, and then the prosecution of the chief suspect before information comes to light that points the finger of guilt at an entirely different person. It was a fine first episode to introduce to viewers assistant state’s attorney Peter Stone (Philip Winchester), his associate Anna Valdez (Monica Barbaro), their wily politically oriented chief state’s attorney boss Mark Jefferies (Carl Weathers), and the office’s investigators Antonio Dawson (Jon Seda) moving over from Chicago P.D. (though after the cancellation of Chicago Justice, it was announced he’d be returning to his previous series) and Laura Nagel (Joelle Carter).

After that premiere episode, however, which was definitely not tied to any procedural formula, subsequent episodes of Chicago Justice took on the exact flavor of Dick Wolf’s most prolific hit series Law & Order: an initial crime discovered, an investigation into likely suspects by the office’s investigative team, and the prosecution of the arrested party. And the identification with Law & Order went further in that the lead prosecutor here Peter Stone is the son of prosecutor Benjamin Stone from Law & Order’s first seasons. (Stone’s associate Paul Robinette played by Richard Brooks actually turns up for one of the thirteen cases tried in its first season). It’s a fabulous formula, and it worked for twenty seasons of Law & Order, but one couldn’t help noticing that the other Chicago based shows in the quartet followed no such tried-and-true formula and concentrated much more on the personal lives of the characters in the show than Chicago Justice ever does, possibly one reason the show didn’t draw quite as large an audience as its siblings.

The cases this season are all compelling ones, complex stores concerning, among others, the murders of a Muslim student, an esteemed judge, a police officer, a college student participating in an escape game, a gang slaying, a hit-and-run caused by a sinister plot of spousal abuse, a juror’s murder, and a confidential informant killing possibly by the police officers whom he worked for. The episodes end with a verdict, always unpredictable and not always in the prosecution’s favor which makes the trials unpredictable and contagiously watchable. The acting throughout is mostly fine if occasionally irritating. Philip Winchester is a solid if unexciting leading man, and Monica Barbaro as his associate carries on the long tradition of feisty brunette female assistants that endeared actresses like Jill Hennesy, Carey Lowell, Angie Harmon, and Alana De La Garza to the public. Jon Seda and Joelle Carter are fine as well with Carter’s character Laura Nagel undergoing a painful loss of child custody that is mentioned several times during the season and would obviously have been much more focused on had the show been given a second season. Carl Weathers, however, gets the nasty job of being the grouchy, unsupportive, and threatening boss who continually pours water on the flames of his team’s legal passions, a role that sours and aggravates over the course of the season. Occasional guest stars from the other Chicago franchise shows turn up like Jason Beghe, Taylor Kinney, Elias Koteas, and Oliver Platt, and the guest star ranks are also swelled by actors like Bradley Whitford, Tovah Feldshuh, Richard Masur, Faith Prince, Josh Cooke, Dylan Walsh, Tim Kang, and Richard Schiff.

Here are the thirteen episodes contained on three DVDs in this first season set:

The program is presented in its widescreen television aspect ratio of 1.78:1 and with the programs anamorphically enhanced for modern televisions. These are probably the best DVD transfers I’ve seen in a long time with not even aliasing or moiré patterns in evidence and solid sharpness throughout every episode. Color is richly saturated but always controlled with accurate and appealing skin tones. Black levels are first rate. Each episode has been divided into 4 chapters.

The Dolby Digital 5.1 sound mix is pretty low key since so much of each episode takes place in the courtroom. Dialogue has been excellently recorded and has been placed in the center channel. Background music gives the program its only real surround elements of any note. The Chicago ambiance in the outside scenes is never really captured to envelop the listener in sound.

Despite its overly familiar formula, NBC’s Chicago Justice deserved a better fate. It’s a compelling carbon copy of Law & Order that featured just as fine acting, writing, and production as the original series. In a different timeslot on a different night, it might have even outrated its sister Chicago shows. At least fans of the series can enjoy these exceptional standard definition transfers of the thirteen episodes which were produced.

I got so I didn't enjoy watching the show as the season went on. 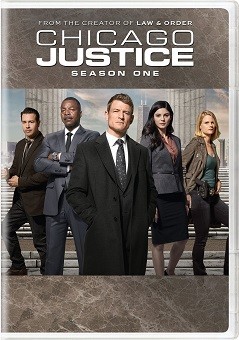