Sequel to Waste of Talent 2.5 Stars

Believe it or not, the sequel Charlie’s Angels: Full Throttle makes its (region A) Blu-ray debut 15 years after its initial theatrical release as a tie-in to the new Charlie’s Angels movie reboot.

The Angels (Cameron Diaz, Drew Barrymore and Lucy Liu) are back with a new Bosley (Bernie Mac, replacing Bill Murray) and a new case, this time with the United States government. Somebody has stolen two rings, which when combined, hold top government secrets, including the true identities of those in witness relocation. Along for the ride are Robert Patrick, Demi Moore (as a former Angel, Madison Lee), Justin Theroux, Shia LaBeouf, Luke Wilson, Matt LeBlanc, John Cleese (as Lucy Liu’s dad?), Crispin Glover, Carrie Fisher, and even Bruce Willis.

Charlie’s Angels: Full Throttle makes even less sense than the original, borrowing even more heavily from other movies (the opening is sort-of an homage to the introduction of Marion Ravenwood in Raiders of the Lost Ark), and returning director McG makes this installment feel even more like a montage of music video clips, and the stunts are so over the top that even putting your mind on hold doesn’t help suspend your disbelief. Sony has included both the theatrical and unrated cuts of the film on this release.

Charlie’s Angels: Full Throttle was photographed in Super 35mm and completed as a 2K digital intermediate. It is a bit hard to believe that this release marks the movie’s debut on Blu-ray (at least for region A) some 15 years after its theatrical release. Unfortunately, it almost appears as if the transfer used on this release was created around that time. This is an overly bright presentation, with blown out highlights and colors, which leads me to believe as such. Detail is also slightly soft, although that may be intentional, as it is more obvious in close-ups of the leading actresses.

Full Throttle arrives on Blu-ray with a loud and active DTS-HD MA 5.1 track. Music is spread across all 5 channels, getting a nice low-end boost from the LFE channel. Surrounds are active and used unsparingly, again with a generous low-end boost. Dialogue is clear and understandable throughout.

Audio Commentary with Director McG: The director discusses various technical aspects of the film. Available with or without “Telestrator” options, and only on the theatrical cut of the movie.

Writers’ Commentary: John August and Cormac Wibberley & Marianne Wibberley discuss various revisions the script went through prior to and during production. This track is only accessible on the theatrical cut.

Pussycat Dolls (upscaled 1080i; 4:55): A look at the dance sequence performed by the then-popular Los Angeles dance troupe Pussycat Dolls.

There’s No Such Thing as a Short Shot, Just an Overworked Producer (upscaled 1080i; 8:51): Executive Producer Patrick Crowley discusses his involvement in the film and the challenges of keeping it on schedule and on budget.

Angels Makeover: Hansen Dam (upscaled 1080i; 4:06): A look at the opening escape sequence.

Cameo-Graphy (upscaled 1080i; 3:37): Brief clips of the various cameos featured in the movie.

In its Blu-ray debut, Charlie’s Angels: Full Throttle suffers from what appears to be a dated transfer and, let’s face it, an even more incomprehensible movie than the previous entry.

Thanks for the review. I ordered this one and look forward to seeing it again.

some great extras on the disc. I will come back to the audio commentary for sure. 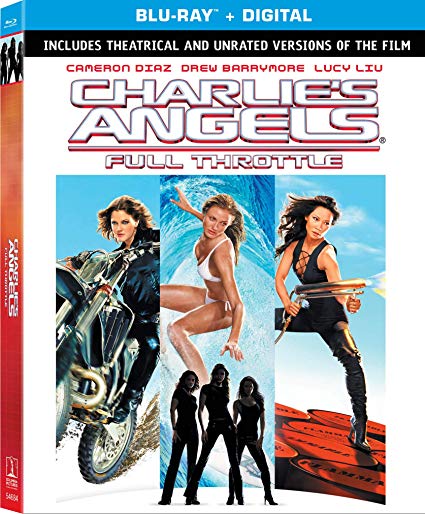