Forum List What's new Dark Style Change width
Log in Register
What's new Search
Menu
Log in
Register
Navigation
Install the app
More options
Dark Style
Close Menu
Posted on March 6, 2020 by Todd Erwin
You are using an out of date browser. It may not display this or other websites correctly.
You should upgrade or use an alternative browser.
Lazy and sexist action film 3 Stars

The latest incarnation of Charlie’s Angels attempts to make the series more international, a globe-trotting adventure that ultimately runs out of steam and ideas.

Callisto, essentially an Amazon Echo that doubles as a power source, is about to go to market by its manufacturer, until one of its designers, Elena Houghlin (Naomi Scott), tells her boss Peter Fleming (Nat Faxon) that the device has a design flaw that, if exploited, could be used as an EMP that would not only fry anything electronic in its range, but cause anyone nearby to stroke. Fleming tells Elena that it is nothing to worry about and that the company will go ahead with its immediate plans to launch. Not happy about this, Elena meets with Edgar Bosley (Djimon Hounsou) of the Charles Townshend Agency to turn over her findings. Before she is able to do so, she and Edgar are ambushed by assassin Hodak (Jonathan Tucker). Although Elena escapes with the help of two of Edgar’s Angels, Jane (Ella Bsallinska) and Sabina (Kristen Stewart), Edgar is killed, Elena’s USB drive containing the vital evidence is destroyed, and Hodak also escapes. The three girls meet up with the new head Bosley (Elizabeth Banks), who takes them to a safe house for debriefing and regrouping, deciding to break in to Elena’s lab to steal one of the prototype Callisto devices. Somehow, the bad guys appear to be one or two steps ahead of the Angels, almost as if there is a mole.

Charlie’s Angels began as a weekly action TV series in 1976, airing on ABC, and was dubbed by many critics as “jiggle TV” for its numerous shots of the three female leads often dressed in bikinis or other revealing outerwear. In 2000, Drew Barrymore brought Charlie’s Angels to the big screen with co-stars Cameron Diaz and Lucy Liu, with music video director McG at the helm. The plot was pure vaporware and the three leads nothing more than sex symbols, and was followed up three years later with the sequel Charlie’s Angels: Full Throttle, which had an even more incomprehensible plot and felt like a series of quick vignettes than an actual movie. Sixteen years later, and time for a reboot. Enter writer-director Elizabeth Banks (Pitch Perfect 2), who unfortunately, doesn’t bring much of anything new to the table. Ditching the sex symbol stigma of the previous incarnations, Banks takes an almost 180 degree approach. Yes, these girls are much more independent and most certainly are never really used as jiggle bait (to use a non-PC 1970s term). But there is almost a sense of female chauvinism hanging over the entire film, almost proclaiming “girl power” from the instant the movie begins until the closing credits. Worse, with the exception of maybe three characters, there are no positive male figures in this film – nearly all of them are killers, power-hungry ego maniacs, or male chauvinists. The exceptions are Saint (Luis Gerardo Méndez), the Angels version of “Q;” Langston (Noah Centineo), Elena’s boy-toy lab assistant; and Edgar Bosley (Djimon Hounsou), Jane’s boss and personal trainer. Banks, as a director, does have a good eye for some interesting visuals seen throughout the film, but the action sequences feel repetitive, each one following the same formula and having almost the same outcome every time. This new Charlie’s Angels starts out with some fun, but winds up being a lazy bore.

Charlie’s Angels was primarily captured at 3.4K resolution on Arri Alexa Mini cameras with some sequences at 8K on Red Helium cameras, completed as a 2K digital intermediate in the 2.39:1 aspect ratio. Sony’s 2160p upscale adds HDR10 high dynamic range for this release, and is what one would expect for a new release from Sony. Detail is excellent, particularly in the intricate fabric textures of the costumes, landscaping of the exotic locations, etc. Colors are natural and vivid without appearing overly saturated, with wider gradations of tones when compared to the included 1080p Blu-ray. Contrast is also exceptional, with deep blacks capable of distinguishing black hair and black suits against a black background (check around the 14:00 mark) and bright whites that never clip.

Sony has fitted the UHD release with a very good DTS:X track that provides a wide and expansive soundstage. The overheads and surrounds allow for specific instruments from Brian Tyler’s score to play in precise areas of the listening field. For example, the drums at the 27:03 mark sound as if they are just behind and above you. During that same sequence, the sound of Bosley’s car pans fluidly as the camera moves to locate it. LFE is strong, added some additional emphasis to explosions and the occasional hip-hop song from the soundtrack. Dialogue is clear and understandable throughout.

All of the extras can be found on the included 1080p Blu-ray edition.

Deleted & Extended Scenes (1080p; 5:15): Five scenes are included – I’ll Be More Punctual, Incredible Work, This is Why They Call You Angels, I Was Bored and You Got Played, Man.

Stronger Together: The Sisterhood of Angels (1080p; 7:33): A look at the three actresses playing the Angels.

Charlie’s Angels looks and sounds great on UHD Blu-ray, as one would expect from Sony. The movie, though, is a bit of a dud.

Thanks for the review. I'm surprise you gave the movie a 2.5 film score. Now, my film score is more like a 1.5 as I watched it in a Dolby Cinema theater during it's theatrical run.

I saw a preview scene of the new film on the full throttle Blu Ray. My wife and I both were unimpressed.

I lost all interest in this new version after that.

I love the Barrymore films though.

I'll be the lone voice to give it a thumbs up. My son and I went to see it and we both enjoyed it. In fact, we liked it way better than Hobbs &amp; Shaw which was basically two guys hating on each other for over two hours in between messy action sequences. Could not wait for that movie to end. Certainly it was more coherent and fun than the recent mess known as Harley Quinn.

I think your line about girl power and female chauvinism says more about your problems than anything about the movie. Or maybe you really do miss the jiggle bait.

Whoa there! Stop with the personal insults towards our reviewer.

JC Riesenbeck said:
I think your line about girl power and female chauvinism says more about your problems than anything about the movie.
Click to expand...

This will be my ONLY response to this personal insult - I watched this with my wife and she brought up the "girl power" and man-bashing issues WAY before I did and hated the movie much more than I did for those issues alone.

Todd Erwin said:
This will be my ONLY response to this personal insult - I watched this with my wife and she brought up the "girl power" and man-bashing issues WAY before I did and hated the movie much more than I did for those issues alone.
Click to expand...

You guys consider that a personal insult? I repeat, all I questioned was his comments about female chauvinism and jiggle bait. Words used in the review. Now if that's considered a "personal insult" because I questioned his reasoning and use of the terms, then the definition of personal insult sure has changed. But whatever. I'll just let it go but I suggest you re-read exactly what you wrote.

JC Riesenbeck said:
You guys consider that a personal insult? I repeat, all I questioned was his comments about female chauvinism and jiggle bait. Words used in the review. Now if that's considered a "personal insult" because I questioned his reasoning and use of the terms, then the definition of personal insult sure has changed. But whatever. I'll just let it go but I suggest you re-read exactly what you wrote.
Click to expand... 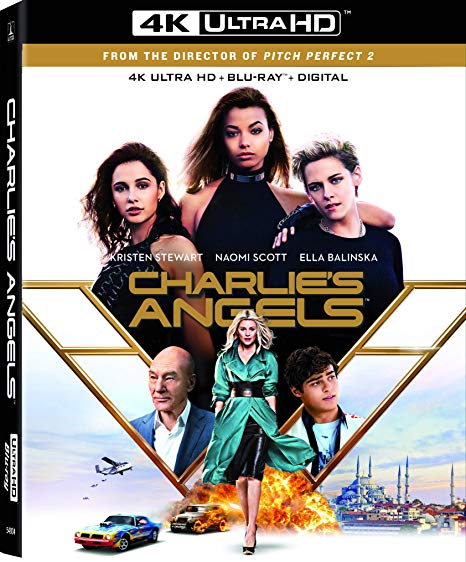