Posted on November 4, 2017 by Matt Hough
A familiar if touching Christian-based story of forgiveness 3 Stars

A faith-based drama dealing with forgiveness of others and of our own moral lapses, Judd Brannon’s Champion may ladle on its spiritual message rather ham-fistedly, but it’s an involving and at times moving character drama.

A faith-based drama dealing with forgiveness of others and of our own moral lapses, Judd Brannon’s Champion may ladle on its spiritual message rather ham-fistedly, but it’s an involving and at times moving character drama uplifted by fine leading performances and some beautiful location photography in Georgia.

Champion dirt track racer Sean Weathers (Andrew Cheney) is currently fifth in the points race of the current season and desperate to continue winning at any cost. When hotshot rookie driver Ray Reed (Isaiah Stratton) threatens to steal his glory during an important race, Sean runs his car directly into his path and causes an accident injuring himself and killing Ray. Fired by his team owner and aimless without racing, single father Sean neglects his parenting duties and has his sweet daughter Gracie (Faith Renee Kennedy) removed from his home and put in foster care while he gets his life back on track, difficult to do without steady employment and dealing with an addiction to pain killers. Ray’s estranged father Jack (Gary Graham), on the verge of reuniting with his son, is bitter about his death and angry with Sean for causing the accident that led to Ray’s passing but is persuaded by Ray’s best friend Logan (Cameron Arnett) to open his heart to forgiveness and help both himself and Sean get through this trauma. Jack offers Sean handyman work around Ray’s river cabin getting it in shape for selling, but over the weeks of toiling together, the two men work through their guilt and anger and begin to find their way back to becoming a part of the real world again.

There is nothing particularly original about the plot fashioned by screenwriters Missy Reedy and Sarah Inabnit: these are characters we’ve seen many times, and the almost two-hour film treds across very familiar narrative territory complete with a third act explosion of recrimination between the two men after more than an hour of camaraderie building an almost father-and-son bond between them to replace the real-life interactions with their own father and son that never existed. After that flare-up, the film takes a decidedly heavier religious tone with a half dozen characters espousing Christian doctrine in what up until then had been a very gingerly handled faith-based story. Director Judd Brannon doesn’t have the budget to stage the racetrack crash very convincingly, but he’s been blessed with some gorgeous Georgia-based locations especially on the river which offers some compelling sunrises and manages to make the most of them with awe-inspiring imagery. The script lets down the characters by short-cutting some important character behaviors (no signs of Sean’s opiate withdrawal, no focus on Gracie’s adjustment to living with a (perfect, Christian-centered) foster family) and springing ill-prepared surprises to heighten emotional reactions (the biggest: how Ray and Logan became entwined in each other’s lives), but Christian audiences likely won’t mind these dramatic lapses and shortcuts.

The two primary stars Andrew Cheney as Sean and Gary Graham as Jack do admirably with the heavy lifting required of them in this story, especially since their professionalism points up some of the amateurs who are performing in some of the secondary roles alongside them. Faith Renee Kennedy as Gracie has a naturalness before the camera that does her proud in her scenes, and Cameron Arnett and to a lesser extent Portia Cue do fine as the Evanses who provide much of the Christian ethic on display as the best friends of the deceased racer. Robert Amaya offers the film’s comic relief as pit crew chief Rex, and Lindsay Sparks does reliably as chief mechanic Sam. We don’t get to see enough of Isaiah Stratton as Ray to gauge his talent, but in flashbacks and video footage, he makes a decent visual impression. Taryn Chidebelu-Eze as child services’ aide Sheila sounds a bit studied as do Collin Alexander Brown and Kristi Walker as the foster parents who welcome Gracie into their home.

The film is presented in 1.85:1 aspect ratio and is anamorphically enhanced for widescreen televisions. Using a good upconverting disc player, the image is wonderfully sharp without edge enhancement and displays surprising detail not only in facial features and costumes but in the wood paneling in the river cabin and wood grain on the pier. Color is bright and natural with believable and appealing skin tones. Contrast has been nicely applied for a consistent picture. The movie has been divided into 20 chapters.

The Dolby Digital 5.1 sound mix features the almost constant background music of Cliff Duren which gets routed to the fronts and rears. The music is also supplemented by numerous Christian gospel tunes warbled on the soundtrack during heightened emotional moments in the story. Dialogue has been well recorded and mostly sits in the center channel though there is one prominent use of directional dialogue. Ambiance at the race track gets a bit short-changed and that carries over into the river cabin sequences which likewise lack a bit of atmospheric punch.

Music Videos (15:52): four music videos of songs featured in the movie can be watched in montage or individually. They are Amber Nelon Thompson’s “He’s Making Me,” John Waller’s “Life Is a Gift,” Jake Holman’s “Rest,” and John Waller’s “Your Word, My Life.”

Faith-based audiences will likely find Champion an inspiring and emotionally uplifting story despite its predictable plot and less-than-original characters. The film’s heart is in the right place, and its two leading actors push its Christian themes of love and forgiveness forward with aplomb. 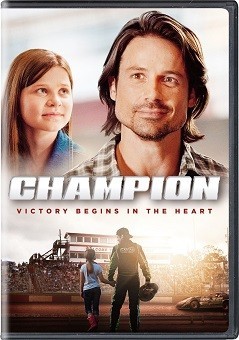