Forum List What's new Dark Style Change width
Log in Register
What's new Search
Menu
Log in
Register
Navigation
Install the app
More options
Dark Style
Close Menu
Posted on January 12, 2023 by Colin
You are using an out of date browser. It may not display this or other websites correctly.
You should upgrade or use an alternative browser.

Hey everyone, this is Colin, one of the new owners of Home Theater Forum. @Jonathan (HTF co-owner) and I just got back a few days ago from CES 2023 and I wanted to do a little bit of a recap: who we met, what we saw, and what products got us excited.

Warning: If you’re here primarily for software discussions (Blu-Ray, etc), this might be a bit dull. =)

This was our first time attending CES, so we really didn’t know what to expect. But we went in with a few clear goals:

We had a rental car (more on that later), so we decided to drive to the Las Vegas Convention Center the first day rather than make the 40 minute walk from our hotel. Well, we were stuck for over 40 minutes trying to get into the parking lot, so that was a fail. But after getting into the massive 4.6 million-square-foot facility, things started going our way. We made a beeline to Hisense, the first TV/Projector manufacturer we saw, and within minutes of looking at their new UST projectors, Jonathan said to me, “Hey, there’s Robert Zohn!” We had been emailing him about the idea of meeting up, but didn’t plan on bumping into him at an event with 100,000 attendees!

We rudely interrupted his conversation to introduce ourselves, and spent several minutes discussing Home Theater Forum and CES. Robert also introduced us to the Hisense National Sales Manager Laser TV from Hisense, who went hunting for business cards for us after Robert raved about the community at Home Theater Forum.

I won’t bore you with a play-by-play of the 3 days, so here are some key takeaways: SVS Booth… and yes, please resume playback now that my ears are no longer ringing!

LG Wins the award for most impressive display 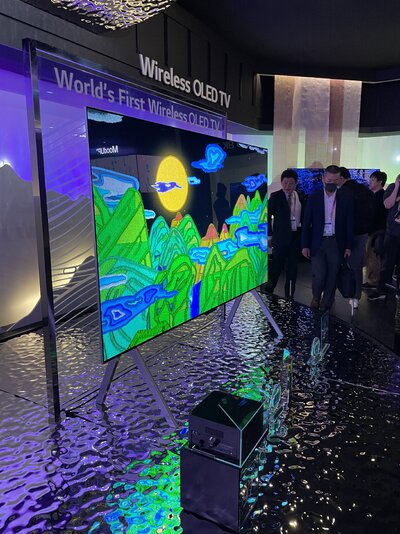 The picture doesn’t do the TV justice, but this is the 97” Wireless OLED. The box in the bottom is where you connect HDMI cables, etc

Jonathan and I both have young kids at home and don’t get away too often. So when our “work” was done, we did prioritize having some fun… primarily in the form of our transportation. Our original plan was to Uber around Vegas, but when I started calculating the costs of Uber rides, I decided it wouldn’t be much more expensive to get a car on Turo (Turo is like AirBNB for cars). I happened to find a last minute deal on a Tesla Model S Plaid for $400 for 3 days. Jonathan spends his free time watching Top Gear and reading up on the world’s fastest cars, so I couldn’t pass up an opportunity to get him behind the wheel of the fastest 0-60 car on the streets. He can share his take, but it doesn’t get old going from 0-60 in 2 seconds. No, we didn’t get to drive the new flying car revealed at CES, but it felt at times like we were flying in our car. 😉

This is only in “Sport Mode” so it took a sluggish 3 seconds to get to 60mph 😉 Side note: My hand was shaking like crazy recording this, but my iPhone’s stabilization did an amazing job smoothing out the recording!

While I primarily wanted to let you all know what we saw at CES, I also wanted to hear from you…

What latest tech are you most interested in learning more about or adding to your home?

We have 10 awesome reviewers here, and as I mentioned, we will be scaling up the hardware reviews this year. What types of home theater products are you most interested in having reviewed?

Very nice wrap-up review of things we saw and learned about at CES!

Thank you meeting up at CES. I enjoyed our conversations and all of your plans for our beloved HTF!

Colin said:
an opportunity to get him behind the wheel of the fastest 0-60 car on the streets.
Click to expand...

Seriously great write up and so happy you guys had a good time AND made so many contacts. I am really hoping to make my ces return next year. It’s my 35th anniversary of attending the last time

Sam Posten said:
Haha now we have to meet up so you can try the true champion my F150 Lightning

Seriously great write up and so happy you guys had a good time AND made so many contacts. I am really hoping to make my ces return next year. It’s my 35th anniversary of attending the last time
Click to expand...

It was nice to see you at the Octavio booth at CES.

If you want to review our speaker, don't hesitate to send me an email

Thanks for the event report. I look forward to seeing the hardware reviews!

Thank you a bunch for the report - especially for we folks who didn't make it. Great overview!
You must log in or register to reply here.