Central Intelligence teams massive action star Dwayne Johnson with compact comedy star Kevin Hart in an action comedy blending spy movie and high school reunion movie tropes.  As one might guess from Director Rawson Marshall Thurber’s prior work, the emphasis tilts heavily towards comedy. As one might not guess from Johnson and Hart’s prior work, the comedy derives primarily from the awkwardness and insecurity of its two lead characters.

Rationally, there are several reasons why I should not like Central Intelligence.  It’s plot is perfunctory at best and phoned in at worst.  This applies both to the spy plot and the high school reunion plot that run in parallel throughout the film.  It even relies on the “idiot plot” device of having a character withhold information for no other reason than to allow the story to advance.   Flaws this glaring are usually enough for me to write off a film as a lost cause, … and yet I found myself entertained and in an unusually forgiving mood while watching the film.

Chief among the film’s redeeming virtues are the performances of its two lead actors.  Kevin Hart, as a former high school Mr. Everything who finds himself unsatisfied with his career twenty years after graduation, plays against type and turns out to be an almost George Burns level straight man.  Dwayne Johnson, as bullied overweight teen Robbie Wierdich who has since transformed himself into man mountain CIA agent Bob Stone, displays complete commitment to his character’s internal pain and awkwardness even when anchoring the most outrageous action sequences.  Having two lead characters who are fundamentally nice people defined by their insecurities and discomfort is unusual and almost novel for a male-driven action comedy.  As a result, even during the rather generic plot beats, the film consistently delivers laughs rooted in strong, and occasionally broad, characterizations.

Similarly, while the spy plot is always threatening to be bogged down by too much exposition, the actors and actresses saddled with delivering most of it, none more so than Amy Ryan as CIA Agent Harris, find ways to make it efficient and even funny.  The scenes with Ryan flip Kevin Hart’s role in the comedy dynamic as the flustered straight man meets the unflappable straight woman.

The film is presented on disc both in its original 108 minute theatrical cut and in an extended 116 minute unrated cut.  The additional material consists primarily of short scene extensions that provide additional character beats, extra jokes, and more profanity compared to the theatrical cut.  The best addition comes in a scene about 2/3 of the way through the movie where Hart’s Calvin Joyner explains the origin of his “Golden Jet” high school nickname.  It occurs in a point in the movie where it does not quite make sense that the characters would be stopping for such a long conversation, but it is a nice character moment.  Overall, I preferred the theatrical cut.  One senses that at its core, this particular movie wants to be PG-13, and it already feels a bit long without the scene extensions.

The AVC encoded 1080p presentation is letterboxed to the film’s original theatrical aspect ratio of 2.4:1.  For the most part, it is pure modern digital perfection.  Free of any distracting video or compression artifacts, this Blu-ray would be a good choice for people wishing to show off bright and sharp source material on their home theater display.

The DTS-HD MA 5.1 audio is clean and dynamic. The mix does not always fully exploit the dimensional possibilities of the 5.1 sound field, but features impressive balance between dialog, music, and effects.  This balance is best illustrated in an elaborately staged action scene set in an office that mixes both verbal and physical comedy throughout the on-screen screen mayhem.  One scene where the surround field is fully exploited is the film’s opening sequence which plays over an amazing 5.1 mix of En Vogue’s My Lovin’ (You’re Never Gonna Get It).

When the disc is first played, the viewer is greeted with the following skippable promos:

For some strange reason, special features are divided into “rated” and “unrated” versions.  The only feature for which this really makes sense is the commentary track that plays over either version of the film

Commentary Rated by Writer/Director Rawson Marshall Thurber and Editor Michael Sale.  This track varies between screen specific commentary and audio essay.  Topics discussed go back and forth between film production and editing in general and the production and editing of Central Intelligence in particular.  It is overall an interesting and informative track with some surprising frankness about aspects of the movie about which they were concerned.  This includes concerns about the audiences willingness to accept the multiple somewhat protracted endings which, as some of the alternate scenes on the disc illustrated, could have continued on for “Return of the King” levels of “protractedness” had they not reigned it in during editing.

Line-O-Rama Rated (2:27) includes a montage of alternate takes where the actors run variations on a line with improvised changes.  Kevin Hart is, not too surprisingly, exceptionally good at this, but Dwayne Johnson also shows some considerable riffing skills.

Dance Off Rated (2:26) Uses before and after effects wipes to show how Sione Kelepi was digitally combined with Dwayne Johnson’s face to create the character of Young Robbie in the film’s opening sequences.  The second half of this feature shows an impromptu dance off that was held between Kelepi and Johnson while shooting the film’s high school reunion scenes.

Gag Reel Rated (5:38) Is a fairly amusing collection of on camera bloopers, gags, and blown takes from the film’s production

Couch Time Lapse (:41) Illustrates how a quick clean-up gag was accomplished in a continuous take for a particular scene in the movie.

Commentary Unrated   includes additional comments from the rated commentary, but they only point out and comment on added material two or three times over the whole track.

Alternate Scenes Unrated (1:09:51) includes all of the scenes from Alternate Scenes Rated with the addition of many more very long extended sequences.  In order, they are identified as:

Line-O-Rama Unrated (2:31) is only a few seconds longer than its rated counterpart.  I did not even try to spot the difference

Dance Off Unrated (2:26) is identical to Dance Off Rated.

Central Intelligence will be a lot of fun for fans of Dwayne Johnson or Kevin Hart.  Both actors play against type to great comic effect despite a by the numbers plot.  It is presented on Blu-ray with terrific audio and video for both a PG-13 theatrical and an extended unrated version of the film.  Special features are dominated by an informative commentary and a huge collection of alternate and delete scenes. 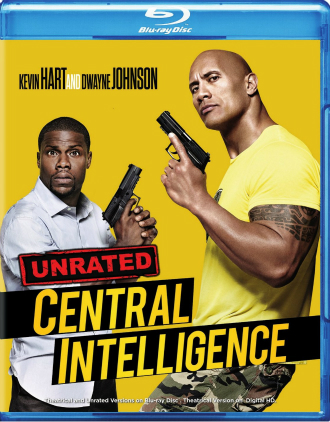