Cat Ballou, a very humorous western which also has serious overtones and features an Academy-Award winning dual-role performance by Lee Marvin, arrives on Blu-ray from Twilight Time with a flawless transfer from Sony.

The tip-off that Cat Ballou is not going to be a typical western occurs immediately after the curtain goes up, when the Columbia torch lady casts off her shawl and gown and morphs into an animated cowgirl firing two six-guns. We are then introduced to two banjo-playing minstrels (played by Nat King Cole and Stubby Kaye), who inform us that Cat Ballou (Jane Fonda) is about to be hanged for killing a man in Wolf City, Wyoming.

We meet Catherine “Cat” Ballou in her jail cell, where she awaits her execution. She flashes back to the day when she boards a train after finishing her schooling. She is headed to her home in Wolf City, where her father has a ranch and she plans to become a schoolteacher. While looking for a seat she gets an approving look from Clay Boone (Michael Callan), a good-looking but handcuffed prisoner who is in the custody of Sheriff Maledon (Bruce Cabot). She takes a seat across from a seemingly harmless minister (Dwayne Hickman), who turns out to actually be Clay Boone’s Uncle Jed. Cat pretends to be perusing a book of poems by Tennyson, but Jed catches on that she is really reading a dime novel about the gunfighter Kid Shaleen. Jed, continuing to pose as a preacher, tricks Sheriff Maledon and helps his nephew to escape.

Upon arriving in Wolf City, Cat discovers that things have changed. Sir Harry Percival (Reginald Denny) is a ruthless developer who has been buying up the land around Wolf City and is trying to drive Cat’s father from his ranch. Sir Harry has hired a silver-nosed assassin named Tim Strawn (Lee Marvin) to force Cat’s father from the land. Wolf City is controlled by the corrupt Sheriff Cardigan (J.C. Flippen), who is on Sir Harry’s payroll. The only ranch hand still working on the once-prosperous spread is a young Indian, Jackson Two-Bears (Tom Nardini), who is regarded with disdain by the cowboys in Wolf City because of his ethnicity. After Strawn threatens Cat’s father, she meets Clay and Jed at a dance and believes that the fugitives from the law will be able to protect her father. When it turns out that in reality they are averse to violence, Cat offers the job to Kid Shaleen (Lee Marvin), the gunslinger hero of her dime novels. However, when Shaleen arrives in Wolf City it is undeniable that he is now a dissipated drunkard who can no longer shoot straight.

Lee Marvin is brilliant in the dual roles of Strawn and Shaleen. In particular, as Shaleen he demonstrates a surprisingly uncanny knack for physical comedy. Jane Fonda plays it straight as Cat, transforming from a prim schoolteacher into a defiant outlaw after her father is killed. Michael Callan is convincing as the handsome cowboy who is more interested in seducing Cat than getting involved in anything dangerous. Dwane Hickman, who will forever be remembered as television’s Dobie Gillis, is amusing as Jed. Tom Nardini is very appealing as Jackson Two-Bears, who might be made to be Cat’s love interest if the film were remade today – but not so much in 1965. Mention must be made of the delightful performances of Nat King Cole and Stubby Kaye, who comprise a musical Greek chorus throughout the film. Sadly, Cole died of lung cancer at the young age of 45, four months before Cat Ballou was released.

This was the feature-film debut of director Elliot Stevenson, who had previously done impressive work on such television programs as The Twiight Zone, Route 66, The Westerner, and Have Gun – Will Travel. The witty script is credited to Frank Pierson and Walter Newman, and is based upon the novel “The Ballad of Cat Ballou” by Roy Chanslor.

Anyone who has seen Cat Ballou will forever remember the iconic shot of Kid Shaleen and his horse just before Cat is scheduled to be hanged. For the sake of those who have not seen it, I will say no more. Cat Ballou is an enormously entertaining film which has lost none of its luster since its premiere 51 years ago.

The 1.85:1 1080p color image is flawless. The picture is very sharp, colors are vivid and accurate, contrast is excellent, black levels are inky and shadow detail is very good. There is not a hint of damage anywhere on the print. Cinematographer Jack Marta makes excellent use of beautiful locations in Colorado – note the gorgeously golden aspens in the mountains. This being a Sony transfer, you can be certain that there are no digital artifacts or other signs of excessive manipulation.

Readers are encouraged to look at the high praise heaped upon this Blu-ray by our resident expert, Robert A. Harris:

A few words about…™ Cat Ballou — in Blu-ray

The outstanding audio has something to please everyone. The English 2.0 DTS HD-MA soundtrack essentially replicates how Cat Ballou sounded in theaters in 1965. Some may prefer the wider sound of the remastered English 5.1 DTS HD-MA soundtrack. Enjoy whichever audio track you prefer.  English SDH subtitles are available.

“The Ballad of Cat Ballou,” which was nominated for the Best Original Song Academy Award, is by the renowned songwriting team of Mack David and Jerry Livingston, and the score by the famed Frank DeVol also received a nomination. It was an exceptional year for original songs in films. The winner was “The Shadow of Your Smile” and the other nominees were “I Will Wait for You,” “What’s New, Pussycat?” and “The Sweetheart Tree.”

Two of the extras on this Blu-ray release have been ported over from the Special Edition DVD, which apparently is out of print. They are an entertaining and playful audio commentary by Michael Callan and Dwayne Hickman, and a featurette, “The Legend of Cat Ballou,” which features director Elliot Silverstein.

Two other extras are new: an informative commentary track by film historians Eddy Friedfeld, Lee Pfeiffer, and Paul Scrabo; and an interview of Lee Marvin’s widow, Pamela Marvin. She married Lee in 1970, after his breakup with Michelle Triola (of palimony fame), but she had known him since meeting him when she was in high school in Woodstock, N.Y. and he was a World War II veteran.

The isolated score track is presented in 5.1 DTS HD-MA, and just before the opening credits we hear the music, but not the vocals, when Nat King Cole and Stubby Kaye are singing. At the end of the credits both the music and vocals can be heard, but in subsequent scenes the vocals are not included, except in one scene in a brothel where Cole is singing and playing a piano.

Also included is an eight-page illustrated booklet with an insightful essay by Julie Kirgo. She makes some interesting observations about the stellar career of Lee Marvin and how Cat Ballou was an inspiration for Mel Brooks’ hilarious western spoof, Blazing Saddles, as well as other films.

Cat Ballou is a delightfully entertaining film which is now available from Twilight Time with outstanding picture and sound, as well as a nice array of extras. It has been released in a limited edition of 3,000 units, so readers who are interested in purchasing it should go the Twilight Time website or the Screen Archives website and confirm that copies are still available. You will not be disappointed.

Thank you for the review Richard. I can only agree with your comments; a wonderful piece of cinema. Very hard to believe that it is 51 years since I first saw it!!

Bernard McNair said:
Thank you for the review Richard. I can only agree with your comments; a wonderful piece of cinema. Very hard to believe that it is 51 years since I first saw it!!
Click to expand... 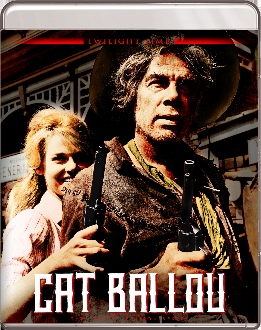