Forum List What's new Dark Style Change width
Log in Register
What's new Search
Menu
Log in
Register
Navigation
Install the app
More options
Dark Style
Close Menu
Posted on February 5, 2018 by Matt Hough
You are using an out of date browser. It may not display this or other websites correctly.
You should upgrade or use an alternative browser.
Comic romp has never looked better. 3.5 Stars

An amiable comedy of miscommunication with delightful stars and touches of screwball comedy tropes of old, Sam Wood’s Casanova Brown is fairly lightweight material for two Academy Award-winning stars, but as the third screen version of a tried-and-true formula comedy, Casanova Brown is certainly easy to take. Classic Flix has brought another Golden Age title to Blu-ray looking and sounding its best.

College professor Casanova Brown (Gary Cooper) is on the eve of marrying Madge (Anita Louise) when he learns that his former wife Isabel (Teresa Wright), who had had their marriage annulled due to outrageously extenuating circumstances, has just had a baby that he had unknowingly fathered and plans to put the child up for adoption. After seeing his child, Casanova’s paternal instincts take over, and he’s resolutely determined that if Isabel doesn’t want the child, he most certainly does and takes steps to make sure he gets her.

It’s the third time around cinematically for this particular tale adapted by Nunnally Johnson from the play Little Accident by Floyd Dell and Thomas Mitchell, but the calculating, misguided efforts of Isabel to win back her former hubby by pretending not to want her child aren’t any more palatable this go round even with the lovely and genuine Teresa Wright playing her. It’s one of those wacky scenarios that only happens in the movies with a character bending over backwards to make something happen that might well have occurred through simple honesty and straightforwardness. The film’s fun, then, comes from the personalities of its characters, many on the periphery of the action but performed by such superb character actors who absolutely steal the show. There is Madge’s apoplectic father (Frank Morgan) so money hungry that he’s practically got dollar signs for pupils in his eyes. And Isabel’s nutcake mother Mrs. Drury (Patricia Collinge) who lives and dies by astrological prognostications. And well-meaning but thick-headed bellman Frank (Emory Parnell) who can’t make a move without putting a wrong foot forward. Their forceful personalities playing against Gary Cooper’s sincerity and simplicity raise the entire comedy quotient of the picture up several notches. Sam Wood directs smoothly and efficiently including the film’s most striking sequence: a calamitous inferno of a blaze begun from an ornery cigarette butt that refuses to be snuffed out.

Gary Cooper, in his first independent venture after years serving under studio contracts, seems to relish playing this rather milquetoast character, and once he becomes the father-who-knows-best in the picture’s final third, he’s quite funny going to extremes to insure that his baby stays healthy (including always wearing sterilized hospital gown, mask, and gloves when attending it). The slapstick-gone-haywire of that fire sequence also shows him underplaying quite effectively. Teresa Wright doesn’t appear until a flashback late in the first act and spends long periods out of camera range as Cooper takes over domestic duties, but she does what she can with a less-than-intelligent role. Far better and probably the film’s secret comedy weapon is Frank Morgan who absolutely steals the first two-thirds of the movie as the cantankerous potential father-in-law who prizes money above all things (and when he finally gets some near film’s end, he remains hysterical). Patricia Collinge is likewise hilarious as the deadpan cuckoo worshipper-of-the-heavens with Edmond Breon also effective as her obedient husband. Jill Esmond (the first Mrs. Laurence Olivier) is all business as the maternity hospital’s chief physician Dr. Zernerke, and Mary Treen has some fun of her own as an obliging hotel maid. Emory Parnell as the dull-witted bell captain likewise provides the funny.

The film’s original aspect ratio of 1.37:1 is faithfully reproduced in this 1080p transfer using the AVC codec. It’s a beautiful picture throughout with sharp imagery (except for close-ups of its two stars which are more softly focused) and a delectable grayscale with offers deep black levels and bright whites. Dirt, dust, and damage are for the most part nonexistent, and the entire movie has a sheen that’s most appealing. The movie has been divided into 15 chapters.

The DTS-HD Master Audio 2.0 mono sound mix reflects the mono sound reproduction of its era. Any problems with age-related hiss, flutter, and crackle have been completely eliminated. Dialogue, Arthur Lange’s background score, and the atmospheric effects appropriate to the story have all been smoothly blended together.

Sam Wood’s Casanova Brown is a modest but quite enjoyable comedy of the 1940s with fine star turns by Gary Cooper and Teresa Wright and brilliant, scene stealing supporting work by Frank Morgan and Patricia Collinge. Fans of the stars or this era of moviemaking will be most thankful Classic Flix has provided yet another Golden Age treat for period connoisseurs.

Thanks Matt for your fine review. I'm going to try to watch this Blu-ray this week as I read some negative comments about the movie. Again, comedy is so subjective so I'll see what happens as I haven't seen this movie in many, many years and don't remember much about it. Perhaps, my memory will kick in once I start to watch the disc.

I watched my Blu-ray early this morning and found it an enjoyable comedy. My film grade is 3.0 which is an average movie grade by me. Yes, the ClassicFlix Blu-ray's video presentation is really good.

While I haven't unwrapped my Blu-Ray, I thought this movie was excellent.

It has been a few years, but I especially love the scene early on when Gary Cooper has troubles with his cigar, and accidentally burns down his in-law's mansion.

I'm perhaps biased a bit though since I adore Teresa Wright.

Inspired by this recent discussion, I watched Casanova Brown on blu-ray last night. My wife and I both thoroughly enjoyed it. Frank Morgan is great, of course, but so are Theresa Wright and Gary Cooper. Mary Treen is another standout. I'm a big fan of screwball comedies, and this certainly has some of those elements. For my money, a fun little comedy.
You must log in or register to reply here. 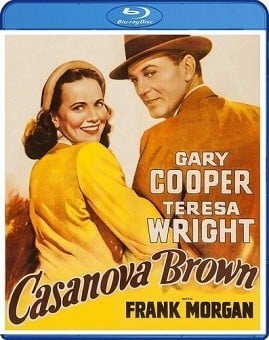