Based on Dav Pilkey’s wild series of children’s books focusing on a bonkers superhero, David Soren’s Captain Underpants: The First Epic Movie will likely delight the smaller fry in your house while trying the patience of anyone above puberty.

Based on Dav Pilkey’s wild series of children’s books focusing on a bonkers superhero, David Soren’s Captain Underpants: The First Epic Movie will likely delight the smaller fry in your house while trying the patience of anyone above puberty. Like many Dreamworks Animation projects, the film is brash, loud, and outrageously colorful, but its almost ninety minutes in length seems very much ado about nothing while its level of humor and narrative motifs seem fitting mainly for pre-middle school mentalities.

George Beard (Kevin Hart) and Harold Hutchins (Thomas Middleditch) are two overly imaginative fourth graders who have spent four years together in a treehouse creating comic books and an equal amount of time pranking their martinet of a principal Mr. Krupp (Ed Helms). When their mean principal finally gets the goods on their latest mischief thanks to fourth grade tattletale Melvin (Jordan Peele), he threatens to separate them into different classes, so the mischievous boys accidentally hypnotize him into thinking that he’s their ridiculously enthusiastic, incredibly dimwitted superhero creation named Captain Underpants who thinks he has super powers when he actually doesn’t. That momentarily lessens the threat of their being separated, but a superhero, even a faux one, just happens to come in handy at that very moment when a new science teacher Professor P. (Nick Kroll) arrives at the school with only one dastardly plan: to completely eliminate all laughter in the world forever.

Culled from bits and pieces of Dav Pilkey’s twelve-book children series, the screenplay by Nicholas Stoller is really shy of plot and characterization. We know that the two boys are devoted to one another (the movie ends with a paean to their eternal brotherhood: “A Friend Like You”), would do anything to prevent being separated, and find any reference to the bathroom hysterical (a monster robot toilet is the evil genius’ secret weapon), but they otherwise have no discernible personalities. Mr. Krupp and Professor P. are cardboard villains (well, the boys are able to calm the principal’s nasty inclinations by introducing love into his life in the form of cafeteria lady Edith played by Kristen Schaal), and Captain Underpants is a slapstick creation of utter stupidity. Small, wry comments on the public school system and irresponsible child rearing might creep into the narrative here and there, but amid the bombastic presentation both aurally and visually, it would take a wily detective to ferret it out. The movie is fast-paced: you won’t find many children who get bored with it because it moves so quickly and never settles on any one character for long. The blazing color and director David Soren’s dedication to switch things up occasionally (a montage of pranks the boys have pulled over the years, a flip-o-rama segment in hand drawn animation) keep things interesting to a point. And, of course, for a movie about a character who parades around proudly in his underpants in public, all of the expected poop, fart, and pee jokes are present and accounted for.

Kevin Hart and Thomas Middleditch have great camaraderie and completely convince us that the two boys are devoted friends (and to their credit, no feeble romance nor any petty squabble is introduced to separate the boys’ tight friendship). Ed Helms gets to show his versatility as both the conniving, evil Mr. Krupp and the wacky Captain Underpants. Nick Kroll gets to play completely over-the-top mastermind Professor Pee-Pee Diarrheastein Poopypants intent on eradicating laughter in the world after having been the focus of so much of it due to his highly suggestive name. Jordan Peele makes a great snitch Melvin Sneedly, and Kristen Schaal gets a couple of scenes to shine as the lovestruck lunch lady Edith.

The film’s theatrical 1.85:1 aspect ratio is faithfully rendered in this 2160p transfer using the HEVC codec. Sharpness is, of course, exceptional with every fiber of hair and the weaves in the clothing visible. As colorful as the Blu-ray is, the UHD version multiplies that by ten with colors always deeply saturated, often fluorescent, but never out of control. The HDR brings out the multitudes of deep color, the sharp degrees of brightness, and the black levels to perfection. The movie has been divided into 24 chapters.

The film was shown in 3D in select theaters, and there are several segments where it appears the 3D was being used quite creatively and effectively even though the UHD transfer is only 2D.

The Dolby Atmos soundtrack (decoded to the Dolby TrueHD 7.1 core on my equipment) features the explosive sound mix at its optimum pitch. Dialogue has been well recorded and has been placed in the center channel. Theodore Shapiro’s background score and cover versions of pop songs like “Think” and “Oh, Yeah” as well as songs written and performed for the film by Al Yankovic and Andy Grammer get the full surround treatment along with excellent placement of ambient effects in the fronts and rears throughout the presentation.

There are no bonus features on the UHD disc. These features are contained on the Blu-ray disc enclosed in the package:

The Really Cool Adventures of Captain Underpants Motion Comic (2:52, HD): as the title explains, it’s a new adventure for the Captain in motion comic form.

Guide to Being a Hero (3:51, HD): five tips from Captain Underpants for being a successful superhero.

Guide to Being a Villain (3:53, HD): Professor P. relates five items on a checklist necessary for being a successful arch enemy.

Deleted Scenes (11:00, HD): five deleted sequences done in animatic storyboard form are introduced by the film’s director David Soren with an explanation about why they were omitted.

“A Friend Like You Lyric Video (3:45, HD): the song featured over the closing credits is performed with on-screen lyrics by Andy Grammer.

Kevin Hart and Ed Helms Surprise Fans (2:07, HD): six children talk with the film’s two stars about their roles and their favorite bits from the books.

Sock Puppets Real Stars (0:27, HD): the famous sock puppets of the two boys have the last word about the movie.

Art Galleries (HD): two galleries which may be stepped through manually or automatically. The first are the seven covers to George and Harold’s comic books. The second are twenty-two hand drawn frames featuring sequences from the movie.

Blu-ray/Digital Copy: disc and code sheet contained in the case.

Captain Underpants: The First Epic Movie will likely delight your younger movie watchers, but unlike other Dreamworks animated titles, there’s a singular lack of heart and soul here, lost to an overabundance of noise, color, and frantic action. 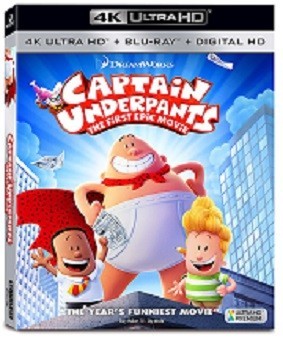