Posted on June 7, 2019 by Todd Erwin
Fun but rather routine origin story 4 Stars

Captain Marvel is a fun 1990s flashback telling of the super hero’s origins, setting up the audience for Avengers: Endgame.

Movie audiences were first introduced to Captain Marvel in the post-credit sequence of Avengers: Infinity War last summer, and nine months later her origin story unfolded on movie screens to great box office success. The movie plays like a buddy cop mystery as Vers (Brie Larsen), who is led to believe she is a Kree soldier with super powers working for the Starforce under the command of Yon-Rogg (Jude Law), arrives on Earth and teams up with S.H.I.E.L.D. agent Nick Fury (Samuel L. Jackson) as they try to locate a team of Skrulls led by Talos (Ben Mendelsohn). Talos is trying to locate a sub-light engine designed by Dr. Wendy Lawson (Annette Benning) in hopes of relocating his species to a new home, away from the Kree. As their investigation continues, Vers begins to get her memories back, discovering that she was Carol Danvers, a test pilot for the US Air Force, presumed dead when her plane crashed with co-pilot Dr. Lawson on board with the test engine. With the Kree Starfleet currently en route to Earth to retrieve the engine, Carol Danvers has to retrace her steps to rediscover her true self and save the world from destruction.

What drives most of Captain Marvel is the buddy chemistry between Larsen and Jackson, two rogues who play off of each other that is a delight to watch (they have teamed up previously on Kong: Skull Island and more recently Unicorn Store). Directors Anna Boden and Ryan Fleck (Mississippi Grind) capture the 1990s perfectly, from the clothing of its characters, song choices, and even the internet café (including the dial-up handshake sounds and Alta Vista search engine). The movie doesn’t break any new ground in the super hero origin story sub-genre, but it does paint a strong central female character in Carol Danvers (and a few supporting ones, too). Captain Marvel also introduces us to Carol’s pet cat Goose, one of the funniest animal comic reliefs in a super hero film.

Captain Marvel was captured in 6K and 8K resolution on Arri Alexa 65, Panavision Millennium DXL, and RED Weapon 8k VV Monstro cameras and completed as a 2K digital intermediate with Dolby Vision high dynamic range for its premium theatrical engagements. Disney’s 4k UHD Blu-ray release features an upscaled 2160p HEVC-encoded transfer with HDR10 high dynamic range, which is a subtle improvement over the included 1080p Blu-ray edition. Colors are more natural and vibrant, and details are much more refined. Where the disc truly shines, though, is in its handling of black levels and shadow details. Two examples are the almost pitch black battle sequence on Torfa during chapter 2 (which comes off as milky grey on the Blu-ray) and the various black shadings of Talos’ black suit at the beginning of chapter 10.

Disney’s 4K UHD Blu-ray release of Captain Marvel includes a pretty good Dolby Atmos track that, unfortunately, does require a slight push upward on the volume button (but not as much as, say, Thor: Ragnarok). The Atmos track builds on the already excellent DTS-HD MA 7.1 track found on the Blu-ray, with tighter bass and a wider and deeper soundstage. Action sequences are a bit more lively, with jets and ships flying overhead and Carol’s memories filtering in from all around you, all the while dialogue remains clear and understandable.

As usual for Disney, the UHD disc contains no extras whatsoever, with all of the special features to be found on the included Blu-ray.

Introduction by Co-Writers/Directors Anna Boden & Ryan Fleck (1080p; 1:51): Accessible from the Play Movie sub menu, this is a way too quick discussion on the movie. I have to ask, though, why couldn’t this be included on the UHD Disc?

Audio Commentary by Co-Writers/Directors Anna Boden & Ryan Fleck: The two discuss the film in great detail, starting with the very moving tribute to Stan Lee during the studio logo. Again, though, why couldn’t this be included on the UHD disc?

Featurettes (1080p; 23:25): Standard EPK-style behind the scenes feature, including the following segments – Becoming a Super Hero, Big Hero Moment, The Origin of Nick Fury, The Dream Team, The Skrulls and the Kree, and Hiss-Sterical Cat-Titude.

Deleted Scenes (1080p; 8:47): A total of six scenes, including “Who Do You Admire Above All Others?”, Starforce Recruits, Heading to Torfa, “What, No Smile?”, Black Box and Rookie Mistake.

Journey into Visual Effects with Victoria Alonso (1080p; 7:20): Executive Vice President of Production at Marvel Sutdios Victoria Alonso, along with many other executives discuss the role of visual effects within the MCU. This is a digital exclusive available on select digital retailers when redeeming your digital copy.

What Makes a Memory: Inside the “Mind Frack” (1080p; 4:37): A look at the mind frack sequence. This is a digital exclusive available on select digital retailers when redeeming your digital copy.

Captain Marvel: Her Story (1080p; 2:47): An EPK style look at the character. This is a VUDU digital exclusive available when redeeming your digital copy.

Captain Marvel is a fun entry in the MCU, and Brie Larsen rises to the challenge of playing a strong female lead. The 4K UHD presentation is near excellent. 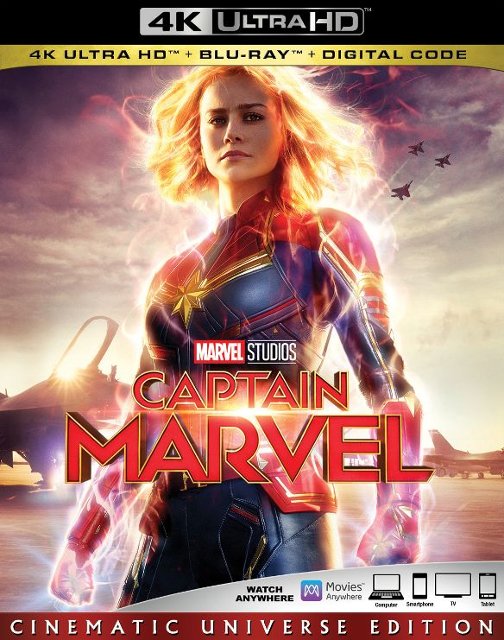