Canyon Passage is an intelligent, adult western directed by Jacques Tourneur which features a stellar cast and outstanding cinematography.

Canyon Passage is an intelligent, adult western directed by Jacques Tourneur which features a stellar cast and outstanding cinematography. Logan Stuart (Dana Andrews) is an ambitious businessman who has a store and a freight company in the mining town of Jacksonville, Oregon. As the film opens he arrives on horseback in Portland, where he exchanges gold dust for specie (which, he explains, is in short supply in Jacksonville). After he cleans up at his hotel he knocks on the door of Lucy Overmire (Susan Hayward), who is engaged to marry Logan’s friend, George Camrose (Brian Donlevy). Lucy has been expecting George to show up and take her to Jacksonville, but he is preoccupied with a money-making scheme and has asked Logan to escort Lucy.

There is obvious chemistry between Logan and Lucy, but he is engaged to Caroline Marsh (Patricia Roc), who lives on a ranch near Jacksonville with Ben Dance (Andy Devine) and his family. During the night someone breaks into Logan’s hotel room to rob him, but he fights the intruder off. Logan suspects that the culprit is a ne’er-do-well named Honey Bragg (Ward Bond), who has been at odds with Logan for some time. In fact, Logan has reason to believe that Bragg is a murderer, but he does not have enough evidence to prove it. When Bragg later comes to Jacksonville with the intention of fighting Logan the town’s residents, who apparently are starved for entertainment, turn out en masse to watch.

In the meantime it becomes apparent that Lucy’s fiancé George, who is sort of a banker (he holds gold dust for miners), has a gambling problem – so much so that an inquisitive Jacksonville merchant, Hi Linnet (Hoagy Carmichael), has observed George “borrowing” gold dust from his clients in order to cover his gambling debts.

In the meantime, the folks of Jacksonville have an uneasy peace with the local Indians, and a tense encounter occurs when Indians show up at a house raising for a newly married couple. At the same time George’s gambling is causing him to grow distant from Lucy, and she finds herself becoming strongly attracted to Logan.

Canyon Passage is based upon a novel by Ernest Haycox, which was adapted by screenwriter Ernest Pascal (Kidnapped, The Hound of the Baskervilles). Hoagy Carmichael contributes several songs, including the Academy Award-nominated “Ole Buttermilk Sky” which he sings during the film’s final scene. Dana Andrews is sturdy and resolute as Logan, and Ward Bond is convincingly evil as his adversary. Susan Hayward is beautiful as Lucy and was on the cusp of superstardom when Canyon Passage was released (she received her first Academy Award nomination a year later for her performance in Smash-Up: The Story of a Woman). Brian Donlevy turns in a fine performance as a nice guy whose world is crashing down around him because of his addiction to a vice. The excellent supporting cast includes Lloyd Bridges. Director Jacques , who was best-known for his horror films (Cat People, I Walked with a Zombie, The Leopard Man), did a fine job with this western in spite of disagreements with producer Walter Wanger.

Canyon Passage is a somewhat underrated western and its release on Blu-ray is welcome, although for now it is available only in Region 2 so those of us in North America need a region-free Blu-ray player to enjoy it. Note to Panasonic Blu-ray player owners: The stop-stop-top menu workaround does not work with this disc.

This Technicolor film is properly framed at 1.37:1 and is shown in 1080p via the AVC codec. The picture is very sharp and colorful, although it is considerably darker than the Universal DVD which is available in the United States. Of course, if you prefer a brighter picture with less contrast you can always adjust the settings on your monitor. Sharpness is much improved with the Blu-ray and is particularly noticeable in close-ups. The print is in excellent shape and the cinematography of mountainous locations in Oregon by cinematographer Edward Cronjager (Western Union, Heaven Can Wait) is spectacular.

The lossless LPCM 2.0 mono audio is mostly excellent, with just a few seconds of slight distortion noted. Every word of dialogue is clear and understandable, and SDH English subtitles are available for viewers who need them. Hoagy Carmichael’s songs are presented with excellent fidelity.

This Blu-ray disc contains an unusual assortment of extras. A Universal newsreel from 1946 includes footage of the premiere of Canyon Passage.

Also included are no fewer than four old-time radio programs from 1946:

A 16-page illustrated booklet contains production notes and biographical notes about the cast and crew.

Panamint also has included reversible cover art. Both covers are reproductions of original posters and you can choose the cover which you prefer.

Canyon Passage is recommended for North American readers who have region-free Blu-ray players and for our European readers. It can be purchased at the Panamint website.

The current exchange rate with the British Pound is very favorable to Americans and works out to a price of approximately $19.50.

Excellent review, and one I agree with. Many thanks.

I found Hoagy Carmichael's character in this film a kind of forerunner of the character Chris Bolt played by Jack Elam in The Man From Laramie.
The other day I watched Circle Of Danger, also directed by Jacques Tourneur and starring Patricia Roc. I didn't recognise her! 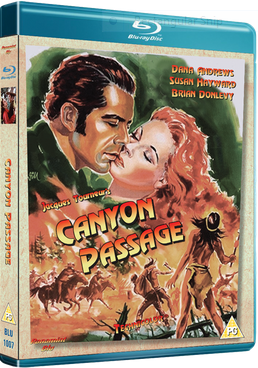