Forum List What's new Dark Style Change width
Log in Register
What's new Search
Menu
Log in
Register
Navigation
Install the app
More options
Dark Style
Close Menu
Posted on September 13, 2017 by Todd Erwin
You are using an out of date browser. It may not display this or other websites correctly.
You should upgrade or use an alternative browser.
Fun ride in 4K 4.5 Stars

The Cabin in the Woods arrives on 4K UHD Blu-ray with an upscaled Dolby Vision HDR transfer and Dolby Atmos audio, making for a fun ride at home.

Five young adults go for a weekend in the woods, only to find themselves in a horrifying situation that is out of their control in Joss Whedon and Drew Goddard’s horror-comedy The Cabin in the Woods. To say anymore would certainly spoil the fun in a movie that almost sat on a studio shelf indefinitely due to the MGM bankruptcy in 2010. Lionsgate snatched up the rights and released the film almost one month before Joss Whedon’s second directorial effort, The Avengers, arrived on movie screens. There are a lot of familiar faces in Cabin in the Woods, noticeably Chris Hemsworth as Curt the stereotypical jock (cast months before he got the role of Thor), Whedon favorites Fran Kranz (Dollhouse) as stoner Marty and Amy Acker (Angel, Dollhouse) as chemical tech Wendy Lin, and character actors Richard Jenkins (Step Brothers, Jack Reacher) and Bradley Whitford (The West Wing) as technicians Sitterson and Hadley. The screenplay by first-time director Drew Goddard (Cloverfield, The Martian) and Joss Whedon is very much a social commentary on the horror film genre at the time of its production, taking viewers on a roller coaster ride with many unexpected twists and turns where things aren’t entirely what they appear to be and a third act that (almost) goes off the rails. The Cabin in the Woods is an impressive directorial debut from two of the best writers in the business.

Lionsgate continues their excellent track record of upscaling a 2K digital intermediate of a catalog title to 2160p, and it seems the studio has embraced Dolby Vision as their primary HDR choice (even though very few UHD Blu-ray players and TVs support it). The good news is that it apparently is mostly backwards compatible with the open source HDR10 that is found on most UHD players and displays manufactured within the last few years. Compared to its 1080p Blu-ray counterpart, the UHD version excels with a modest improvement in fine detail (the pattern in Bradley Whitford’s white dress shirt is much more defined, for example) and film grain is also more noticeable without affecting detail. Colors, especially red, are more natural and vivid, with streams of blood (and there is a lot of it on display) appearing much more fluid and dimensional. Contrast is improved upon here and there, although there are a few minor instances of black crush that can be found if you go looking for them.

This is where the UHD gains major ground over its Blu-ray counterpart’s 7.1 DTS-HD Master Audio track. As I’ve noted in many of my other reviews, the Dolby TrueHD 7.1 core found in Dolby Atmos tracks tend to have a much stronger LFE track than even their non-Atmos mixes. That is the case here, as well. Played back in a standard 7.1 configuration (Atmos is coming as soon as my private screening room is completed), the Atmos track is more expansive than the DTS-HD MA 7.1 track on the Blu-ray, with discrete sounds from more precise locations (and I’m not talking about specific speakers, either). Dialogue is also stronger and more pronounced, too. This is very much a reference-quality track. Lionsgate has also included Spanish Dolby Digital 5.1 and English Dolby Digital 2.0 mixes that are not found on the Blu-ray.

Like most Lionsgate UHD releases, most of the special features have been ported over and are included on the UHD disc.

Audio Commentary with Writer/Director Drew Goddard and Writer/Producer Joss Whedon: The two discuss at length how they came upon writing the screenplay together (Goddard was a writer on Whedon’s Buffy the Vampire Slayer), the casting process, etc. It’s a fun and informative track.

We Are Not Who We Are: The Making of The Cabin in the Woods (1080p; 28:33): Interviews with Goddard and Whedon discussing the creative process are intercut with behind the scenes footage for an interesting look at the making of the film.

Marty’s Stash (1080p; 8:04): Actor Fran Kranz discusses and demonstrates many of the drug paraphernalia props his character used in the movie.

An Army of Nightmares: Make-up and Animatronic Effects (1080p; 12:09): A look at many of the practical effects used in the film.

Primal Terror: Visual Effects (1080p; 12:07): As the title indicates, this is a look at the many green screen and CGI effects created for the film.

It’s Not What You Think: The Cabin in the Woods Bonus View Mode: This is the only special feature that was not ported over to the UHD version, but is available on the included Blu-ray disc. This is your old-fashioned PiP feature with interviews and behind the scenes footage appearing sporadically in a small window while viewing the film.

Digital HD Copy: An insert contains a code that can be redeemed thru UltraViolet partners such as Vudu.

Lionsgate continues to not disappoint with their output of catalog titles on UHD. The Cabin in the Woods is another exemplary effort on their part.

Bump cause I missed this had an amazing Atmos mix when I bought it and it went in the stack to be watched. DO NOT MISS OUT, this is a GREAT Atmos track!!!!

I realize it was a 2D-to-3D upconvert but I dunno why they apparently pulled 3D blu rays of this off the market. Can't seem to find it available in 3D in any region. Def would have picked it up in that format.

Camps said:
I realize it was a 2D-to-3D upconvert but I dunno why they apparently pulled 3D blu rays of this off the market. Can't seem to find it available in 3D in any region. Def would have picked it up in that format.
Click to expand...

Um, this was never converted to 3D, and never released in 3D.

Todd Erwin said:
Um, this was never converted to 3D, and never released in 3D.
Click to expand...

Well, my understanding of the whole history of it is certainly spotty, but I'm just going by these examples:

This Amazon UK listing which indicates there was (alas, no longer) a 3D blu:

This article among others:

Admittedly, it may have been short-lived and a bust... but there seem to be traces of a least a brief 3D presence for this title and, subpar-3D or no, I would have bought a BD in that format. Even subpar 3D enhances most movies for me.

I think that was just a pre-order placeholder. Amazon US has been going the same with domestic releases, posting a 3D placeholder, then abandoning it later when there is no domestic 3D release.

The article from Cnet is about lazy theaters leaving projectors in 3D mode to show 2D films, causing bad image quality. Nothing about any 3D version of CITW.

Malcolm R said:
I think that was just a pre-order placeholder. Amazon US has been going the same with domestic releases, posting a 3D placeholder, then abandoning it later when there is no domestic 3D release.

The article from Cnet is about lazy theaters leaving projectors in 3D mode to show 2D films, causing bad image quality. Nothing about any 3D version of CITW.
Click to expand...

I can't believe it too me 6 years to finally watch this but found it on Tubi TV app and finally sat down and watched it. I recall it being so hyped back when it came out.

All I can say is WTF.

And not a WTF in a good way. That was the biggest letdown in the hyped movie world that I've seen in a long time. Maybe I just didn't "get it" but I found myself just rolling my eyes from the minute they got to the cabin and it never stopped. Get stabbed in the back by a 15" knife and act like it's no big deal, yep. Ditto for another character. The list of "OY!" moments never ceased. Then the whole facility final act was beyond stupid.

So am I to believe that the thousands of caged creatures are just monsters from peoples dreams locked up to use for killing and sacrifices yearly??

Complete letdown for me. I'd give it a 1 out of 5 just because they did indeed put a twist to the usual slasher film.
D

This isn't a movie to seek realism in.

True, but even as a fantasy/horror flick it just fell so flat for me. Especially when all the monsters took stage.
You must log in or register to reply here. 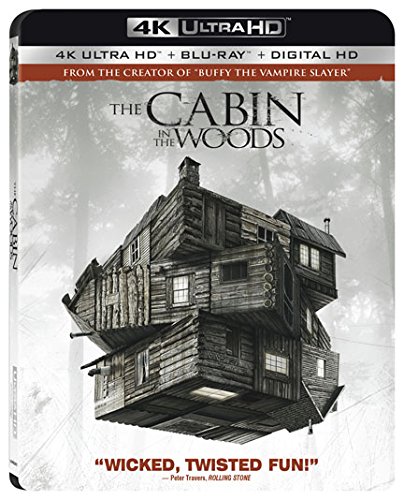