Horror film reapers come in all shapes and sizes, but the one concocted for Stacy Title’s The Bye Bye Man must rank as one of the less gruesome ones.

Horror film reapers come in all shapes and sizes, but the one concocted for Stacy Title’s The Bye Bye Man must rank as one of the less gruesome ones. Possibly because the director chooses the keep him in the shadows only offering fitful glimpses of him and his associate now and again, the Bye Bye Man won’t be replacing Freddy Krueger or his ilk any time soon, and despite a decent set-up for the shocks contained therein, The Bye Bye Man never rises above the mediocre.

Renting a ramshackle old house while attending university, sweethearts Elliott (Douglas Smith) and Sasha (Cressida Bonas) and best friend John (Lucien Laviscount) stumble upon the legend of the Bye Bye Man (Doug Jones), a boogeyman that once his name is spoken aloud gets inside one’s head and plants dastardly hallucinations that lead to all kinds of mayhem. In trying to understand what’s happening to them, Elliott infects others by passing the name along including local psychic Kim (Jenna Kanell) and university librarian Mrs. Watkins (Cleo King). Elliott finally goes looking for answers from a survivor, the wife (Faye Dunaway in the present, Keelin Woodell in flashbacks) of a 1969 serial murderer (Leigh Whannell) who was thought to be the last person infected by the Bye Bye Man.

Jonathan Penner’s screenplay does a decent enough job starting us with the 1969 murder spree without offering any explanations as to what is happening (we finally get a full explanation of this opening sequence late in the film when guest star Faye Dunaway makes her appearance) and then speeding us into the present where our put-upon trio of college students soon become pawns in the Bye Bye Man’s game of murder most foul. There are some agreeably odd occurrences early on (a coin that keeps dropping to the floor even through a solid table drawer, a creepy, shadowy entity that pops its head out of a bedroom crawlspace as an innocent young girl (Erica Tremblay) goes exploring, a nicely staged séance that introduces Jenna Kanell as psychic Kim, deep, deadly-looking scratches in a couple of walls), but as it so often happens in modern day horror films, the film gets dumber and dumber the longer it plays, and some things later in the movie (someone standing in the middle of a highway at night, a police detective who can’t tie together two cases of multiple slaughters, a person stabbed multiple times surviving that and a fire, people who can’t hear something ominous at the most inconvenient times) just defy rational or irrational explanation. The reaper’s companion, a hell hound with a ravenous appetite for human flesh, is one of the worst CG creations in recent memory. Director Stacy Title is fond of the jump scares that are so cheap and easy in films like this, but other moments like Elliott in a library trying to obliterate every mention in a report of his cursed reaper as the Bye Bye Man inches closer by the glance are nicely staged.

Douglas Smith gives the film’s best performance as Elliott whose terror grows exponentially the more he begins to understand his antagonist and how he can be combated. Lucien Laviscount makes a fine best friend, the college jock who naturally becomes a tool the demon can use to drive Elliott crazy with jealousy with his close friendship with Elliott’s girl friend Sasha. Cressida Bonas gives a rather amateurish performance as Sasha, not at ease in her line readings and not registering the kind of fright that her co-stars exhibit. Michael Trucco is excellent as Elliott’s older brother whose presence becomes the best thing about the film’s climactic moments. Jenna Kanell gives a very interesting performance as psychic Kim who doesn’t claim to have extrasensory powers and yet who can sense and know things she otherwise shouldn’t have any access to. Faye Dunaway’s role as Mrs. Redmon offers her little to play but does offer necessary exposition to help the viewer understand those opening scenes. Carrie-Anne Moss as Detective Shaw comes across as a rather slow-witted and uncreative thinker, the kind of character that makes for a great amount of frustration for an audience.

The film’s 1.85:1 theatrical aspect ratio is faithfully delivered in a 1080p transfer using the AVC codec. Sharpness is outstanding allowing us to see details in facial features and hair of the primary characters (and to see those maggots falling from a character’s hair in stark detail in one memorable hallucination), and color is solidly presented and consistently delivered. Since much of the movie takes place at night and in dark cellars and other shadowy places, black levels are important, but while they’re good, they’re not great. The movie has been divided into 20 chapters.

The DTS-HD Master Audio 5.1 sound mix squeezes every ounce of shuddery terror through its available channels and never disappoints. Dialogue has been placed in the center channel, but it’s the atmospheric effects (lots of scratches, creaks, moans, and thumps) that have been so astutely placed in the front and rear channels to heighten whatever tension the movie is able to deliver. There are some panning sounds through the soundstage, and explosive effects like a car crash and a train collision offer plenty of sonic power and depth through the LFE channel. The background music by the Newton Brothers likewise gets a full spread through the fronts and rears.

Theatrical/Unrated Version of the Film: the viewer chooses from the menu whether he wants to watch the theatrical cut (97 minutes) or the unrated edition (100 minutes).

Promo Trailers (HD): The Space Between Us, Cult of Chucky, Split, Sleepless, Incarnate.

Horror fans may find a shiver or two in The Bye Bye Man, but it inevitably wastes its decent premise with an increasing number of ludicrous set-ups and resolutions. Excellent video quality and reference audio distinguish the Blu-ray release of this movie.

I'll probably blind-buy this for the sound alone. I love a spooky film that takes advantage of all the nooks and crannies of surround sound. That's why Darkness Falls is still in my collection, though it's kind of a ridiculous movie.
Expand signature
The purpose of an education is to replace an empty mind with an open mind.
You must log in or register to reply here.
Share:
Facebook Twitter Reddit Pinterest Tumblr WhatsApp Email Link 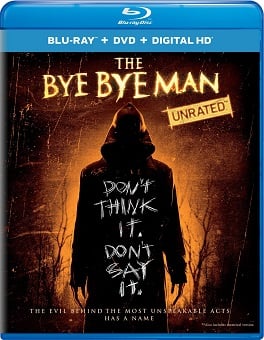