Too Busy to Work offers us the Will Rogers we expect in a movie: funny, easy-going, and with a masterfully understated way with words.

Will Rogers began in the movie business making silent shorts during World War I so that by the time he made his first talkie in 1929, he was a film veteran of more than a decade. Of course, being a stage veteran, the microphone held no perils for him, and he slowly built on his audience making feature films right up to his death in 1935. His output in 1932 was profitable enough to land him for the first time in the list of the top ten box-office stars in America (in ninth place), and one of the films that put him there was John Blystone’s Too Busy to Work, a typical Rogers comedy-drama which allowed the star maximum time in the spotlight to reel off monologue after monologue while supporting a rather flimsy story of domestic strife. Seen today, Rogers’ folksy charm and easygoing way are still enjoyable hokum even if the vehicle that surrounds him is completely forgettable.

When he went off to serve in World War I, Jubilo’s (Will Rogers) wife fell in love with another man Mr. Hardy (Frederick Burton) and took their baby daughter to make a new life in California. Now a hobo some fifteen years later, Jubilo decides to hop a train and look up his former family. When he arrives in California, he learns his wife has been dead for some years, but his beautiful daughter Rose (Marian Nixon) is engaged to marry her stepbrother Dan (Dick Powell), now finding himself duped into being the getaway driver during a bank robbery he knew nothing about. Jubilo doesn’t identify himself to his child, but Judge Hardy knows who he is and leaves it up to Jubilo to decide what he wants to do about the entire affair. Jubilo wants justice for himself, but even in the short time he’s been in California, he’s grown fond of both Rose and Dan and wants to do right by both of them.

Though the film carries a screenplay credit for Barry Connors and Philip Klein, it’s clear Will Rogers is doing a great deal of ad-libbing as the scenes run on, and the movie becomes a field day for the star in his extended monologues. He manages to work in jabs at both political parties (in speaking to a recalcitrant dog, he tries to get it under control using a litany of Republican politicians’ names, and when those don’t work, he switches to a couple of Democrats) as well as reveling in his laziness by tricking hired help Axel (Constantine Romanoff) into doing his chores like chicken plucking and milking the cows for him and having something to say on just about every subject, usually extolling the virtues of relaxation and a carefree existence. Even if director John Blystone takes a page out of the Chaplin playbook and features a couple of striking shots of the shambling Jubilo making his way down a lonely tree-lined road, he manages to keep his main character always likable and unassuming, and there’s a lively sequence where his daughter tries to teach him to drive a car that’s a slapstick free-for-all worthy of the silent clowns. The melodrama of Dan’s unfortunate involvement with a bank robbery eats up the clock and then amounts to very little (Jubilo lies to the police, then backtracks a bit when he confronts one of the robbers who’s dying, guilting him into making a confession that will clear Dan), but the movie’s most cherishable moments involve the slapstick with hired hand Axel, the father-daughter scenes which ratchet up the dramatic irony since we know their connection but she doesn’t, and any scene featuring the always delightful Louise Beavers who’s the Hardy family housekeeper.

There is only one name above the title, and that’s how it should be since Too Busy to Work is, if not quite a one-man show, the closest thing to it. Will Rogers wrings humor and pathos in equal measure throughout the movie helping us to clearly see why he became such a movie favorite of the era. Marian Nixon is innocent and kind as the lovely Rose (she and Rogers share a beautiful moment visiting the grave of her mother and his wife though he doesn’t say anything to her about their connection), and Dick Powell in one of his early (non-singing) roles is an unassuming juvenile leading man. Frederick Burton is a stalwart Judge Hardy, willing to take his medicine if Jubilo seeks revenge while Douglas Cosgrove and Jack O’Hara are perfectly fine as the lawmen assigned to the robbery case. Louise Beavers makes her every appearance a complete joy as she sees through Jubilo’s self-aggrandizement without batting an eye. Poor Constantine Romanoff must be Jubilo’s patsy in all of his shenanigans.

The film’s original 1.37:1 theatrical aspect ratio is faithfully reproduced with this transfer. Obvious work has been done on the film to make it an acceptable part of an earlier Will Rogers DVD box set, and that means that sharpness is very good, and the grayscale offers decent black levels and whites that are very appealing. True, the age of the film means there are going to be some problems Fox wasn’t willing to spend money to rectify: some scratches here and there and some fading down the right and left sides of the frame. But much of the dirt and dust has been eliminated, and there are no reel change markers that one might expect in a lesser transfer. The movie has been divided into chapters every ten minutes so this disc has 8 chapters.

The Dolby Digital 2.0 sound mix is decoded by Dolby Prologic into the center channel. All of the dialogue is easy to hear and understand, and the sparse music backgrounds (mostly under the beginning and ending credits and in the playout music) and sound effects all blend nicely together into the one audio track. There is continual hiss present, however, and the volume level is a bit excessive and requires adjustment to prevent distortion.

Too Busy to Work offers us the Will Rogers we expect in a movie: funny, easy-going, and with a masterfully understated way with words. The Fox Cinema Archive disc release is among the better ones for a movie from the early 1930s, and for those who like the star but who don’t already have a box set of his works, it’s worth the trouble of getting. 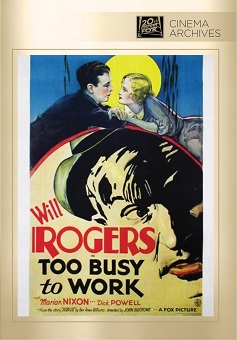