Filmed over five years, the documentary Burroughs had been thought lost until the late director’s son discovered a print of the film in 2011. Work to restore the film began immediately and now Criterion presents a restored version of this absorbing portrait of the late, great William S. Burroughs. The restoration and this release help save an important piece of documentary filmmaking and provides new audiences with the chance to enjoy the spellbinding and intimate view into the life and works of Burroughs.

“The broken image of Man moves in minute by minute and cell by cell…. Poverty, hatred, war, police-criminals, bureaucracy, insanity, all symptoms of The Human Virus.”

William S. Burroughs, one of the greatest literary minds of the 20th century, was a transfixing figure. With a spellbinding vocal cadence when he read from his works, Burroughs delivered through his many acclaimed works, including Naked Lunch, The Wild Boys, and Junky, a remarkably descriptive, fractured, and occasionally disorienting style that wove enrapturing semi-autobiographical tales together into a masterful fabric of literary genius.

Filmed over five years, director Howard Brookner captured an unprecedented intimate portrait of Burroughs, largely in his own words, revealing a fascinating figure. Somewhat reserved, but also direct, Burroughs talks of his experiences growing up, interacting with a friendly neighbor, experimenting with drugs, his male lovers, and friendships with other literary greats such as Allen Ginsburg, Terry Southern and Herbert Huncke. His author and poet friends describe a kind, fiercely intelligent man both detached and warm to those who were fortunate enough to spend enough time getting to a deeper level of understanding of who he was. Brookner, working with multiple crews over the five years it took to make the film, in multiple locations in the US and London, England, pieced together the story of Burroughs’ life in surprising detail. His struggles with drugs, the accidental killing of his first wife in Mexico for which Burroughs would be convicted of manslaughter are discussed with Burroughs himself. And we are richer for the intimate view into Burroughs’ life.

The author we come to understand a little better is described by most contributors in the film as one of the “greatest minds of our lives” or variations of that praise. He was a man who knew he wanted to be a writer since he was a boy, but did not commit to the profession until he was 39, after the death of his first wife, and made a sizeable impression on the field once he started. With a deeply stimulating intelligence, Burroughs enjoyed experimenting with his writing. His Naked Lunch, perhaps his best-known works was, as with most of his writing, rooted in the autobiographical, sharing unflinchingly dark chapters of his life – though some critics contend that he exploited those life chapters with little remorse.

Through an adept assembly of footage, Burroughs is comprehensive and almost linear in its narrative of the author’s life. It intersperses conversations with Burroughs and footage of his interactions with longtime author friends, and the occasional live reading in front of adoring audiences of his prose, to paint an intriguing picture. Burroughs face is kind when he smiles though he rarely smiles and he appears to both resist and embrace the documentation of his life. He shares details of the many things he feared as a child – thunder, the dark – and being plagued by nightmares that triggered the desire to try drugs that would give him better dreams. And through it all he draws an image of vulnerability about himself which only serves to increase the mystery of the man.

With moments of playfulness, Burroughs presents a mesmerizing outline of the intently gifted author and poet with a stinging tongue on the page and a keen gift for painting mesmerizing and often frightening images with his words.

Burroughs is presented in its original 1.33:1 aspect ratio. This high definition transfer available here was created from a 35mm print held by the Museum of Modern Art in New York.  The work to clean up debris and other print issues (scratches, etc.) reveals a good image. The image quality is frequently as good as it can be given the various sources. And the opening of the film is taken from poor quality VHS, and other sources reveal their innate limitations (and charming qualities it must be said). Overall, the image is stable, and accounting for the various sources, consistent.

Criterion provides Burroughs with its original monaural soundtrack remastered at 24-bit from a 35mm soundtrack print. The audio provides good clarity of the voices from those taking part. Ambient sounds depending upon the filming location add variance to the audio offering, but notable distortions or other issues are not to be found.

Criterion provides a healthy and interesting collection of special features for this release, the cornerstone being the excellent audio commentary from director Jim Jarmusch who serves as sound recordist during the film’s production. Jarmusch is able, through his recollections, take us back to the time of the films production and share great details from that time. An audio interview with the late director, Howard Brookner, and over an hour’s worth of outtakes round out the highlights.

Burroughs is a triumph. An absorbing documentary that even for those that are (or were not) fans of the author, should capture attentions and take you through the many corridors of this interesting man’s life. Access to Burroughs himself is the jewel in the film’s crown, though the contributions of other noted literary figures help build a deeper view of the film’s subject. Criterion’s release is superb and is highly recommended. 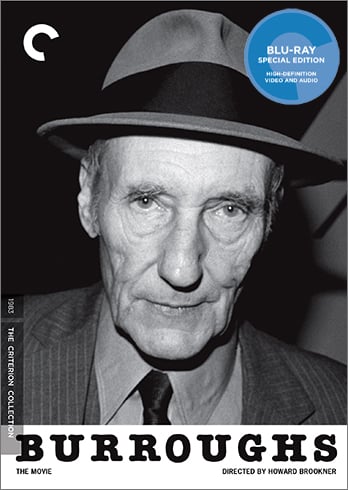