Superstar chef Adam Jones (Bradley Cooper) once had it all including a Michelin two-star rated Paris restaurant, but too much drink, too many drugs, and scandalous affairs with numerous women brought it all crashing down. Now three years later, he’s ready to start again this time in London bringing his expertise to the restaurant inside his former friend Tony’s (Daniel Brühl) Langham Hotel. To rebuild his kitchen, he calls on former chef friends Max (Riccardo Scamarcio), Michel (Omar Sy), and David (Sam Keeley) and hires talented chef/single mom Helene (Sienna Miller) to supervise the beef, fish, and dessert stations with himself as top chef. Opening night goes badly, but once the cooks begin working as a team, things begin to flow smoothly in the kitchen, and the restaurant’s reputation takes off, much to the dismay of Adam’s chief rival Reece (Matthew Rhys) who has already earned this third Michelin star. Adam has focused chiefly on rebuilding his career, but when he begins to take an interest in Helene and when drug dealers from the old days show up demanding to be paid for past debts, his life becomes even more tumultuous.

With the great assistance of chefs Marcus Wareing and Mario Batali, the kitchen scenes ring true throughout the film’s presentation: everything from the frenetic activity, the sense of claustrophobic heat and the verbal abuse heaped on the chefs in order to up their pace to the mouth-watering dishes that are served up in dazzling close-up, all directed with spirit and verve by John Wells and the entire work area made to seem like a combination war zone and magical land where miracles occur. But, the melodramatic narrative by Steven Knight which surrounds this dazzling display of culinary delights couldn’t be more predictable: the romantic coupling of the chef with his only female hire, the drug hoodlums choosing the worst possible time to exact physical punishment for Adam’s slow payments, the will-he-or-won’t-he earn his third star non-suspense. True, there are one or two surprises sprinkled through the plot like sprigs of parsley on a tantalizing dish, but the main takeaways from the movie are completely visual: the vitally rapid sense of rush in the kitchen and those sumptuous arrays of dishes which are produced: sometimes simple things like omelets and other times elaborate servings of grouse or tea-smoked mackerel or a most unusual birthday cake that might make one use his pause button rather often to better scrutinize the delectable edibles.

It’s a monumentally showy role for Bradley Cooper, and his Adam Jones is undoubtedly a firecracker, effortlessly whipping up dishes or speaking French or Italian at the drop of a hat (his kitchen staff is multi-national) and fully venting his rage when things go south or people disappoint him. No other character is given such a dimensional focus, certainly not Sienna Miller’s Helene (though we do get a few nice scenes with her in Mom-mode). Omar Sy’s Michel and Daniel Brühl’s Tony, both of whom have a long history with the volatile Adam, get just enough screen time to establish interesting characters that we’d like to know more about. Matthew Rhys, too, plays the rival chef Reece as well as he can, a man knowing he’s an inferior talent to Adam, but the character should have been more fleshed out. A great cast in even smaller roles seems rather wasted: Emma Thompson as a psychologist, Uma Thurman as a food critic, and Alicia Vikander as Adam’s former love who’s moved on.

The film’s original theatrical aspect ratio of 2.40:1 is faithfully rendered in this 1080p transfer using the AVC codec. Sharpness is outstanding throughout the presentation, and color couldn’t be more on the money giving the food a realistic, savory appeal that makes one want to jump right into the picture. Unfortunately, there are some contrast inconsistencies, and black levels are good rather than great. The movie has been divided into 16 chapters.

The DTS-HD Master Audio 5.1 sound mix does a very professional job in representing the aural design for the movie, but the surrounds rarely achieve a vivid sense of envelopment with the ambiance, something that would cause the restaurant and kitchen scenes to really perk up a notch. Dialogue has been well recorded and has been placed in the center channel (directionalized dialogue in the kitchen as various chefs shout responses to their master would have added immeasurably to the ambiance). Rob Simonsen’s background score doesn’t distinguish itself through it’s basically fine.

Audio Commentary: director John Wells uses scenes from the movie to ask his commentary partner chef Marcus Wareing questions about his experiences with running actual kitchens. Interesting in that regard, but those interested in the making of the film might have to rely on the featurettes on the disc for information on the movie’s production.

Deleted Scenes (9:59, HD): five scenes from the film which may be viewed together or separately and with or without director John Wells’ commentary.

Burnt: In the Kitchen with Bradley Cooper (23:51, HD): a bit of a misnomer, this is actually a behind-the-scenes look at the making of the movie with contributions by director John Wells, producer Kris Thykier, master chef Marcus Wareing, and actors Bradley Cooper, Sienna Miller, Daniel Brühl, Omar Sy, and Sam Keeley.

Q & A Highlights with Director & Cast (23:45, HD): three question and answer sessions: a Screen Actors Guild Q&A with Bradley Cooper, the New York Wine and Food Festival with the director and selected cast members, and a SAG Foundation Q&A with selected members of the cast.

Burnt did not meet box-office expectations when it was released in the fall, and it’s not surprising that the predictable scenario of a man’s bumpy road toward a second chance didn’t quite captivate a large audience. But the film has been produced well and features another showstopping turn by Bradley Cooper. The Blu-ray certainly presents the spectacular procession of edible cuisine with beautiful color and clarity.

Great review Matt. I was very curious about this film.

Thanks for the review. I saw this in a movie theater and have bought the BD. I'm a sucker for chef films. 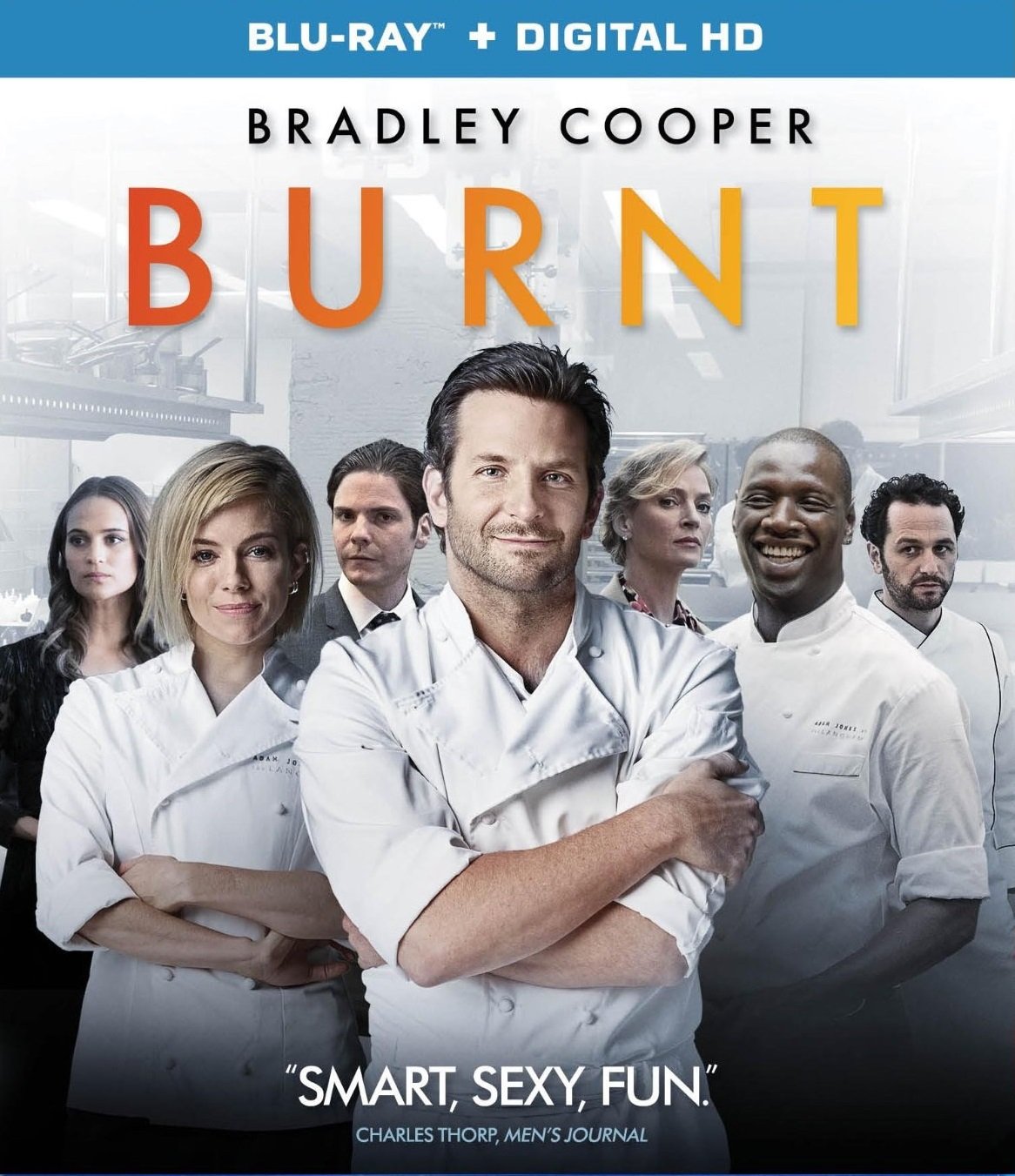