Burden tells the true but unbelievable story of a top-ranking Klu Klux Klan member, Mike Burden (Garrett Hedlund) who has a change of heart, befriending a black minister (Forest Whitaker).

In 1996, a long-closed movie theater is re-opened as a Klu Klux Klan museum in the town of Laurens, South Carolina. A local minister, Reverend Kennedy (Forest Whitaker), stages a protest in front of the museum with members of his congregation. Kennedy has a personal connection to the KKK, as his uncle was hanged by them when he was a young boy. The owner of the museum and gift shop, local KKK leader Tom Griffin (Tom Wilkinson), makes Mike Burden (Garrett Hedlund) his second in command and signs over the deed to the property, as Mike is like a son to him. Mike takes a liking to a down on her luck single mother, Judy (Andrea Riseborough). As the two fall in love, Judy becomes disgusted with Mike’s racist hatred and involvement with the KKK, forcing him to make a choice: her and her son OR the KKK. When Mike chooses Judy and her son, both of their lives are disrupted as both lose their jobs and Judy her home. Homeless and penniless, they turn to Kennedy for help. There is just one problem – Mike was ordered by Tom to kill Kennedy, an order Mike could not go through with. On the flip side, Kennedy knows it is his duty as a man of God to provide shelter for Mike and his new-found family, but as a human and a man of color he is not comfortable offering aid to the enemy. What transpires afterwards is true but almost completely unbelievable, the actual act that inspired this story.

Burden, written and directed by first-timer Andrew Heckler, is well-intentioned, but often suffers from “white savior” syndrome, making the black characters into supporting players and pawns to move the story forward. And that is a shame, because nearly every actor gives a truly believable performance.

Universal has released Burden on DVD and to streaming platforms (in HD). The 480p transfer retains the film’s theatrical aspect ratio of 2.39:1. For DVD, this is a quite remarkable image, with good color fidelity and unbelievably strong detail. Contrast is decent, with good black levels during many of the nighttime sequences.

The lone Dolby Digital 5.1 track, encoded at 448 kbps, is a mostly front-heavy dialogue-driven track, with surrounds kicking in and the track coming to life during scenes like the NASCAR races and protests. LFE is used more to fill in and provide a nice low-end roll to the overall soundtrack.

For a movie that had a long road to release (it won the Audience Award at Sundance in 2018 but didn’t find a distributor, 101 Studios, until this year), it was a little disappointing to see little to no extras on the film. The film tries to convey its message but falters with the same stereotypes and plot devices that plagued similar films like Green Book and The Best of Enemies, although it is the performances that help elevate the film. 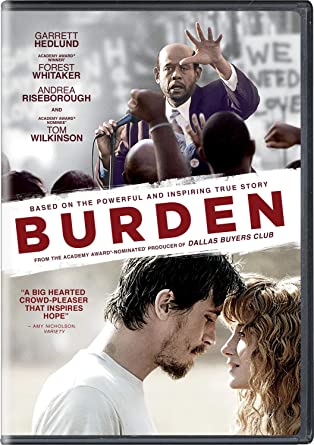