Forum List What's new Dark Style Change width
Log in Register
What's new Search
Menu
Log in
Register
Navigation
Install the app
More options
Dark Style
Close Menu
Posted on July 21, 2019 by Neil Middlemiss
You are using an out of date browser. It may not display this or other websites correctly.
You should upgrade or use an alternative browser.
Enjoyable reboot of sorts sets Transformers off on better footing 3.5 Stars

Bumblebee is offered as spinoff adventure from the enormously successful (but diminishing returns) of the Transformers juggernaut franchise, but it also serves as a curious, sideways reboot of sorts. While the vast and seemingly ever-changing backstory of the autobot existence on earth wasn’t directly challenged in this new film, it did feel like it was put on notice with a simpler, clarified narrative proposition that could make future installments or spinoffs less complicated. Bumblebee largely succeeds as a restated offering of the Transformers universe. It is certainly the most character driven, and it thrives with its smaller scale. But is isn’t without its own issues.

“Bumblebee, our war rages on. You must protect Earth, and its people.”

Fighting a losing war on Cybertron, Bumblebee is dispatched to earth as an advanced scout to prepare for the Autobots to regroup there. But he is attacked by Decepticons who followed his trail. Damaged, he escapes and hides until he is discovered by a Charlie (Hailee Steinfeld), a young girl who finds more than she expected in her junkyard-rescue first car. With a secret earth military force, Sector 7, in pursuit, and the Decepticons still on the hunt for B and the ‘fugitive’ Autobots, Charlie and Bumblebee form a fast friendship and work together to save the earth.

Director Travis Knight does exceedingly well in the smaller scale, where, driven either by budget or design, the film is far more concerned with the evolution of its characters than placing them amongst pyrotechnics.  He offers a brisk, often light and warm, and very human take on the Autobots on earth world which makes for a welcome break from the action and visual effects focused, and convoluted plotting, of the main franchise. The casting of Hailee Steinfeld as the little-bit awkward teen, Charlie, is a stroke of genius. Steinfeld’s a fine actress with a compelling presence, adept at finding the corners of the comedy and rounding the bends of the isolated and socially outcast. And thanks in no small part to the approach from the screenplay and direction, she never gets lost amidst the occasional robot melees.

There’s much to cherish about this Transformers adventure. Its unabashed sense of innocence and fun, the simplicity of its overall plot, and the purposefully quieter moments with character building adding dimension to our heroes-human and otherwise (led by the friendship of Charlie and Bumblebee). Hailee Steinfeld is perfectly cast as the smart young Charlie who knows more about car engines than high school social ‘norms.’ She’s a delight to watch in every scene, and with every other actor with whom she performs. This is Charlie’s movie as much as Bumblebee’s, and the supporting players are very good. Jason Drucker as Otis, her younger brother, is likeable with a good sense of comedy. Her awkward love interest, Memo, is played by Jorge Lendeborg, Jr. who charms with his endless misadventure in wooing her. Charlie’s parents are played enjoyably by Pamela Adlon and Stephen Schneider, and John Cena turns is a good performance as the apparent earthly enemy, Agent Burns.

The frenetic, enormously staged action in the DNA of Michael Bay’s directed adventures is notably absent here. The entire universe feels smaller and more intimate. That serves the character moments and Charlie’s growth arc from awkward to assured, but it also shrinks the world so much that fans of the overall franchise may feel like something missing. The net result is a positive, but the mix of character and adventure could have used a little more calibration, frankly. It sounds like that message was heard by the producers who have made it clear that the expected continuation of this mini-reset film will have a little more action spectacle added in.

Paramount’s Bumblebee is a great looking 4K disc. Presented in its original theatrical aspect ratio of 1.85:1, Bumblebee was filmed using Arri Alexa cameras. The sequences on Cybertron opening the film are a parade of exquisite detail and contrasting colors. Strong visual-effects work showcased by the extra resolution afforded the 4K are quite a feast for the eyes. On earth, the 1980’s setting offers up less vibrancy in the general color palette, but Bumblebee’s yellow pops with delicious clarity.

The HDR10 and Dolby Vision grading (I watched with Dolby Vision) deepen the colors, offer an uptick in the already superb black levels and more clarity in darker sequences (those are infrequent in this film).

Paramount continues offering Dolby Atmos® tracks on its 4K releases with Bumblebee (defaulting to Dolby TrueHD 7.1 for those not Atmos equipped). A pleasingly active audio shines during the well-staged action sequences (which are much smaller scale than those found in the other Transformers films, but still engaging and easier to follow.) Heavy machinery, helicopters flying, fighting and transforming robots, and a full albums worth of great tunes make great use of the audio. Dialogue is well balanced primarily in the center channel and there’s a healthy use of the surrounds, too.

As is standard, the available special features are found on the included Blu-ray, and there’s an okay selection available here. The nearly 20-minutes of deleted scenes have a few interesting moments, but the five-part featurette on bringing Bumblebee to the screen, while not nearly in depth enough to standout, is certainly a nice inclusion.

Bringing Bumblebee to the Big Screen

Digital copy of the film

Bumblebee generally hits the right mark. A character-driven entry into the long and often messy collection of Transformers films. It trades global spectacle for more intimate affairs and the change in ambitions has given the franchise new opportunities and perhaps a new lease on what’s possible.

Smaller and more intimate are, imho, exactly what this universe needed. I was all set to check out of the TF franchise (I skipped the last one) and that's tough coming from someone who had a ton of their toys and comics in the 80s...and yeah bought some of the Takara reissue and masterpiece version of the toys as an adult. Also a huge fan of the original animated TF:the movie. Man I would love to have modern animators re-draw that and just use the original audio stems. Obviously keeping the same Gen 1/2 robot styles, just using modern animation techniques to improve the visuals.

I saw this because a friend who knew me and said I should give it a shot, that she thought I'd like it based on my love for the 80s iteration. She was right. As you say, this movie is not without its issues, but it's quickly become my favorite live-action TF movie, eclipsing all of the Michael Bay movies. They got the spirit right, and using more Gen1 models really tugs at the nostalgia heartstrings.

This 4K version doesn’t compare to the 3D Blu ray. Oh wait, we’ll never now, it was only released flat!

I think it was this review that persuaded me to take a dabble in the TF. I didn’t watch them as a kid and caught a substantial portion of one of the first ones and that persuaded me that’s all I needed to see of the TF franchise. I watched about half last night and will finish tonight.

My impressions are this disc shows what 4K is for. All around wonderful picture. I don’t have atmos but the sound is still great.

Stanfield is very good, she’s the standout so far.

What a crying shame the 3D version on Blu ray was never released!
You must log in or register to reply here. 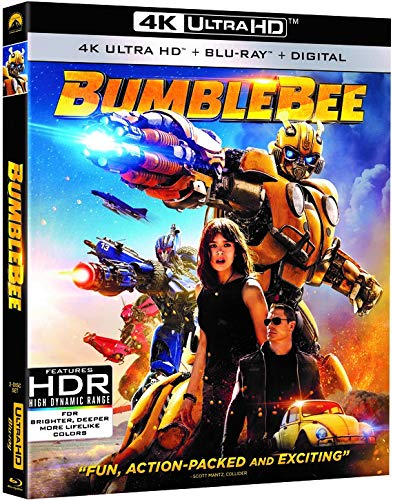