It’s another series of legal conundrums for the members of TAC, the Trial Analysis Corporation, in the second season of CBS’ hit procedural Bull.

It’s another series of legal conundrums for the members of TAC, the Trial Analysis Corporation, in the second season of CBS’ hit procedural Bull. With some exciting guest stars this season and a new showrunner (veteran Glenn Gordon Caron) in charge, the tone of the show this year is different: less frenzied, less flashy, and more directed toward the humanity of the cases being tried. The cast regulars remain the same as last season though there have been some modifications in the duties some of them perform for the company, and this season also focuses occasionally on several of their messy personal lives rather than concentrating only on its central title character.

Dr. Jason Bull (Michael Weatherly) is not a lawyer but rather a trial scientist, an analyst who focuses on the juries selected for the cases and gauging their reactions to the evidence and testimony being presented during trials by using mirror juries in his elaborate and glitzy offices. On his first team are office manager and Girl Friday Marissa Morgan (Geneva Carr), in-house counsel who tries most of the cases that come through the office Benny Colón (Freddy Rodríguez), former NYPD detective and now in-house investigator Danny James (Jaime Lee Kirchner), expert computer hacker Cable McCrory (Annabelle Attanasio), and former NFL star turned in-house stylist and witness prepper Chunk Palmer (Christopher Jackson). While Benny and Danny have pretty settled seasons, Bull, Marissa, and Cable all find trouble this year in various ways allowing their hearts to rule their heads. In Marissa’s case, she is conned by a charlatan (Gary Wilmes) who feigns romantic interest in her, a storyline which plays out over three episodes. Cable lets herself be fooled into committing evidence tampering by an alleged pregnant friend whose husband is being charged with governmental computer maleficence. And even Chunk has personal problems this season, not only with an arrogant, recalcitrant law professor (Chip Zien) who unfairly flunks him but also dealing with a teenaged daughter who up until now had thought Chunk was her uncle and not her father.

But all of these personal problems go on in the background to the show’s central focus, the legal cases that fall into their laps. Among them are a gold-digging wife who murders her husband but makes it appear to be self-defense, the death of a young man pledging a fraternity during a hazing incident, a spoiled superstar who has her child abducted and blames Bull, an abducted teenager who under Stockholm syndrome commits a robbery, a mob boss who feigns schizophrenia to avoid prosecution, an abused woman who shoots her husband in his sleep to escape him, and the climactic two-part season ender where a shy, mute man is accused of rape, arson, and murder in what appears to be an unwinnable case. During the season, guest stars such as Jill Flint (as Bull’s on again-off again girl friend), Brad Garrett (a revered but eccentric lawyer whom Bull trusts to defend him), Archie Panjabi (as Bull’s trial scientist nemesis), Nikki James (a journalism professor on trial for theft), Roma Maffia (the schizophrenic mob boss), and Dana Delany (as an aggressive prosecutor who’ll stop at nothing to win her case) add sparkle to the trials though the series’ writers occasionally drop the ball in taking short cuts (describing a final summation that wins a case rather than letting us hear it for ourselves, not covering both sides of the questions and answers during a trial) in order to fit complex cases within the show’s forty-three minutes of air-time.

After building audience likability for thirteen seasons on NCIS, Michael Weatherly performs similar feats of acting prowess on his own show as Dr. Jason Bull. He drinks too much, isn’t always concerned about his appearance, and has guilt demons about his sister’s death and his own failed marriage that occasionally drag him down. The season cliffhanger regarding him, however, is fairly ridiculous since it’s clear the show isn’t going to do away with its leading actor and title character with the show renewed for a third season. Best among the support staff is Geneva Carr who runs the office efficiently and plays nursemaid to her sometimes erratic boss. And she handles well the devastation midseason once she realizes she’s been conned by a master manipulator (though I would think waking up in the middle of the night and finding a lover rifling through my desk would give me reason for pause; she buys his lame comeback without blinking an eye). Freddy Rodríguez is also a galvanizing bulldog in court and a concerned friend to Bull outside, another fine supporting performer. Christopher Jackson’s Chunk, revealed last season as a gay ex-NFL player, has that facet of his personality definitely downplayed this season with only a single mention of his sexual orientation this year and more time spent focusing on his role in a child’s conception when he was eighteen years old.

Here are the twenty-two episodes contained on six DVDs in this second season set:

3 – A Business of Favors

4 – The Illusion of Control

6 – The Exception to the Rule

15 – Witness for the Prosecution

The program is broadcast on CBS in 1080i and with a 1.78:1 aspect ratio, and these downconverted standard definition transfers have been anamorphically enhanced for widescreen televisions. The show has a very warm color palette, and those hues come through winningly on these discs. Sharpness is also excellent without the necessity for edge enhancement. Being standard definition, there are occasionally noticeable moiré and aliasing artifacts but nothing that is too intrusive. Each episode has been divided into 6 chapters.

The Dolby Digital 5.1 sound mix (a Dolby Digital 2.0 stereo surround mix is also provided) mirrors the sound which is broadcast over the network. Dialogue is rooted firmly to the center channel with occasional ambient effects and Jeff Russo’s music score occupying the fronts and rears as appropriate. Since this isn’t an action-oriented series but rather one that plays out mostly in offices and the courtroom, the opportunities for wide-ranging sound effects are limited, but street noises and other situational outdoor sounds are nicely routed.

Bull Pen (18:44): Producer Glenn Gordon Caron who was brought in this season to ground the series discusses his work behind the scenes while the cast discusses the differences they’ve found working on the two seasons of the show.

20 Questions with Michael Weatherly (7:53): Exactly what the title implies.

Bull by the Horns (6:17): Showrunner Glenn Gordon Caron and star/producer Michael Weatherly (separately) talk about their goals for the season and how well they both think they were achieved.

Deleted Scenes: twenty-nine scenes are scattered across all six discs in the set, aligned with the shows from which they were excised.

CBS’ Bull has improved in its second season with more focused legal procedures and more attention to the emotions of the cases being presented. The second season DVD set looks outstanding for standard definition and will undoubtedly delight fans of the show. 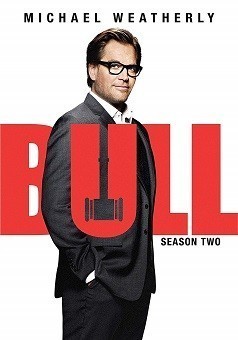