It is ironic that CBS’ hit procedural Bull gained more legal notoriety during its third season for activities off the screen than what was happening on-screen during its very good third broadcast season.

It is ironic that CBS’ hit procedural Bull gained more legal notoriety during its third season for activities off the screen than what was happening on-screen during its very good third broadcast season. Headline accusations of harassment against series star Michael Weatherly and a multi-million dollar settlement with actress Eliza Dushku played across news sites for weeks threatening even the popular series’ chances for a fourth season. Inevitably, the furor died down and the series was renewed (though without any further participation in the series by former executive producer Steven Spielberg), but in its new timeslot this season against some of the most formidable competition on television (2019’s most popular new dramatic series NBC’s Manifest and 2018’s most popular new dramatic series The Good Doctor), the show managed to hold its own presenting a steady string of compelling legal cases with a fair share of surprise endings to offer interested viewers.

There was one new member of TAC, the Trial Analysis Corporation headed by Dr. Jason Bull (Michael Weatherly), this season, computer hacker Taylor Rentzel (MacKenzie Meehan) who replaced the departed Annabelle Attanasio whose character Cable McCrory perished in a bridge collapse. It turns out, the collapse was actually a terrorist attack which the team investigates and tries four episodes into the third season. Other members of TAC also have pertinent personal issues which figure into several of the cases during the season. Office manager Marissa Morgan (Geneva Carr) had reconnected with her ex-husband (David Furr) during the summer hiatus and remarried him. The happy couple has a legal issue that the team must solve during the season, but the couple spends much of the season weighing the possibility of having a child or not. TAC investigator Danny James (Jaime Lee Kirchner) becomes involved with a building superintendent (E.J. Bonilla) who it turns out is an illegal immigrant hiding in the U.S. to escape certain death in his own country. His several episode arc comes to a somewhat satisfying conclusion midway through the season. Jason Bull himself not only continues his flirtation with Texas lawyer Diana Lindsay (Jill Flint) but also reconnects in a meaningful way with his ex-wife Isabella (Yara Martinez), the sister of his best friend and the firm’s bulldog attorney Benny Colon (Freddy Rodriguez). This unusual triangle becomes the basis of the show’s season three cliffhanger.

But all of these personal problems go on during the show’s central focus, the legal cases that fall into their laps. Among them are the accusation of murder of a man with both unshakable DNA evidence against him but unshakeable alibis to offer as well, a teenager previously hidden from the world who must face murder charges for obeying his father, the innocent son of a Mafia chieftain dragged into a murder charge for driving a getaway car with a gun to his head, a medical examiner with an impeccable record is charged with murder when a finding somehow goes awry, and a prison guard who leaves the prison to save his wife during a hurricane is charged with the deaths of two inmates who drowned during the storm. The season also features Bull working alongside an elderly legal idol (Dan Ziskie) whose mental faculties are beginning to slip, Danny assisting her former FBI mentor (Manny Perez) now working as a bounty hunter, and budding attorney Chunk Palmer (Christopher Jackson) handling his first case which runs headlong into one of TAC’s cases with the grandfather of Chunk’s client.

After building audience likability for thirteen seasons on NCIS, Michael Weatherly performs similar feats of acting prowess on his own show as Dr. Jason Bull despite the headline grabbing bad publicity generated by that midseason revelation of distasteful behavior toward a fellow actor during the show’s first season. After his character suffers a heart attack at the end of season two, this year found him drinking much less and being more concerned with fitness even though his love life remained something of a mess. Best among the support staff is Geneva Carr who runs the office efficiently and plays nursemaid to her sometimes erratic boss. It was indeed gratifying to see her mostly healthy and happy during the season with her renewed connection to the man she had originally loved. Freddy Rodríguez is also a galvanizing pit bull in court and a concerned friend to Bull outside, another fine supporting performer. Christopher Jackson’s Chunk, revealed during the first season as a gay ex-NFL player, has that facet of his persona definitely downplayed again this season with almost no mention at all of his sexual orientation despite relationships going on all around him.

Here are the twenty-two episodes which formulate this season’s slate of shows:

1 – The Ground Beneath Their Feet

7 – A Girl Without Feelings

The program is broadcast on CBS in 1080i and with a 1.78:1 aspect ratio, and these downconverted standard definition transfers have been anamorphically enhanced for widescreen televisions. The show has a very warm color palette, and those hues come through winningly on these discs. Sharpness is also excellent without the necessity for edge enhancement. Unlike the usual standard definition transfers, I noticed no moiré or aliasing in these transfers, among the best DVD transfers I have ever seen. Each episode has been divided into 6 chapters.

The Dolby Digital 5.1 sound mix (a Dolby Digital 2.0 stereo surround mix is also provided) mirrors the sound which is broadcast over the network. Dialogue is rooted firmly to the center channel with occasional ambient effects and Jeff Russo’s music score occupying the fronts and rears as appropriate. Since this isn’t an action-oriented series but rather one that plays out mostly in offices and the courtroom, the opportunities for wide-ranging sound effects are limited, but street noises and other situational outdoor sounds (as during the hurricane episode) are nicely routed.

Deleted/Extended Scenes: twenty-seven outtakes are scattered across all six discs in the set, aligned with the shows from which they were excised.

Something About New York (7:49): Glenn Gordon Caron along with location manager Shane Haden and production designer Sarah Frank discuss the joys and challenges of filming in New York City.

CBS’ Bull has continued to improve in its third season with more focused legal procedures, quite a few surprise endings to cases that seemed completely unwinnable, and more attention to the emotions of the cases being presented. The third season DVD set looks and sounds outstanding for standard definition and will undoubtedly delight fans of the show. 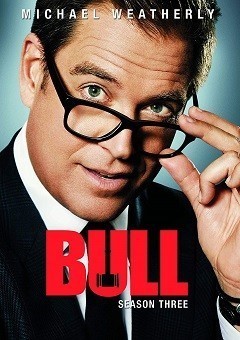