Another successful season for the hit CBS procedural 3.5 Stars

It’s another very good season of Bull, their fourth with a fifth season soon to be in production.

Compared to its previous season three, season four of CBS’ hit procedural Bull was calmness personified. Not only did the season episodes progress without a blip (disregarding the COVID-19 problem which shortchanged the production of three yet-to-filmed episodes), but unlike the previous season, there were no off-screen disturbances to impede production of the show: no charges of harassment or intimidation and no lawsuits for wrongful termination. What’s more, Bull managed to narrow the gap between the timeslot’s first-place finisher (ABC’s The Good Doctor which finished in 11th place for the season) and new second-place finisher Bull (which improved from 16th to 14th place among the year’s most viewed series). So, all in all, season four was a very successful season for the show.

With no new cast members to welcome into the fold, the show’s main characters proceeded along well-plotted paths during this new season. Dr. Jason Bull (Michael Weatherly) spends more than half of the season awaiting the birth of his first child with ex-wife Isabella (Yara Martinez) which finally occurs in episode 14. After providing the show’s season three cliffhanger by quitting, firm attorney Benny Colón (Freddy Rodriguez) manages to sort out his differences with Bull and return to the fold. Office manager Marissa Morgan (Geneva Carr) who had the previous season reconciled with her ex-husband has once again left him (all due to a misunderstanding in which she pretended to be uninterested in having children instead of facing him with the news that he’s sterile). Witness prep artist and attorney-to-be Chunk Palmer (Christopher Jackson) finds himself in conflict with his pregnant daughter who’s a journalism student and is seeking an abortion in order to continue her studies unimpeded by maternity responsibilities. Computer hacker Taylor Rentzel (MacKenzie Meehan) begins dating a librarian during the season but also loses her best friend in a hit and run accident, the story which serves as the season finale.

But, as always, it’s the fascinating cases the firm undertakes that brings audiences back week after week: enigmatic legal problems which are twisted and turned during the program’s admittedly formulaic construction (knotty problem, a seemingly unwinnable position which gets continually worse during the course of the hour, a last minute piece of evidence or an unsuspecting witness brought in near the end to clear away any obscurity for the jury leading to an acquittal). This season the firm is faced with overturning an unfair seventeen-year prison sentence, trying to convict a millionaire abuser who has paid off all of his victims with NDA’s in place, defending a teen accused of killing a doctor who had placed his terminally ill mother on an experimental drug treatment, going after a wrestling coach who pushed a teen wrestler to a heart attack in trying to make weight before his match, defending an inveterate gambler in deep debt for killing her father for his fortune, and trying to keep a passionate judge out of federal prison for doing what she felt was right in her courtroom. In some previous seasons, the firm never lost a case, but this year that isn’t quite the way things wrap up: occasionally the opposing sides come to an agreement before the jury renders a verdict and in one instance, the jury flat out finds the firm’s client guilty. The show’s writers do a very good job showing both sides of the questions they’re presenting, but the directors pull their punches too much by directing the actors playing the district attorneys or opposing counsels arguing the other side to play their roles very smugly and often obnoxiously making the audience doubly invested in seeing Bull’s clients go free.

After a season of watching his weight and not drinking (after a heart attack which provided the season two cliffhanger), Michael Weatherly’s Jason Bull has once again returned to overindulging which might set up future problems in seasons to come. Once again, Freddy Rodríguez earns MVP status as a galvanizing pit bull in court and a concerned friend to Bull outside it. Geneva Carr is given less to do this season once her problems with her husband are placed on the back burner early in the season. MacKenzie Meehan really steps up after joining the show during season three as her character’s both personal and professional lives figure into several cases during the year. Christopher Jackson’s Chunk, revealed during the first season as a gay ex-NFL player, has that facet of his persona definitely downplayed once again this season with almost no mention at all of his sexual orientation despite relationships going on all around him, his problems with his daughter seeking an abortion amid his religious objections to that forming most of his character arc for the season.

Here are the twenty episodes which are contained on four discs in the season four DVD box set:

The program is broadcast on CBS in 1080i and with a 1.78:1 aspect ratio, and these downconverted standard definition transfers have been anamorphically enhanced for widescreen televisions. The show has a very warm color palette, and those hues come through winningly on these discs. Sharpness is also excellent without the necessity for edge enhancement. There is the slightest bit of moiré in these transfers, but most of the imagery is resolved beautifully with a good upconverting player or a TV with strong upconversion rubrics. Each episode has been divided into 6 chapters.

The Dolby Digital 5.1 sound mix (a Dolby Digital 2.0 stereo surround mix is also provided) mirrors the sound which is broadcast over the network. Dialogue is rooted firmly to the center channel with occasional ambient effects like courtroom hubbub or street sounds and Sean Calley’s music score occupying the fronts and rears as appropriate. Since this isn’t an action-oriented series but rather one that plays out mostly in offices and the courtroom, the opportunities for wide-ranging sound effects are limited, but street noises and other situational outdoor sounds like heavy wind and rain are nicely routed through the soundstage.

Audio Commentary: the first two episodes on disc one contain the set’s audio commentaries. Michael Weatherly, Freddy Rodriguez, and director Bethany Rooney chat amiably on the season premiere track while Michael Weatherly (who directed the episode) alone offers a stream of consciousness bit of blabber for the second episode. Fans may enjoy these, but really nothing much of substance is offered.

Four Bagger (15:46): due to the pandemic preventing them from getting together in person, producers Glenn Gordon Caron, Michael Weatherly, and Bethany Rooney assess the show’s main character arcs for the season via video chats.

It’s another very good season of Bull, their fourth with a fifth season soon to be in production. The fourth season DVD set looks and sounds outstanding for standard definition and will undoubtedly delight fans of the show. 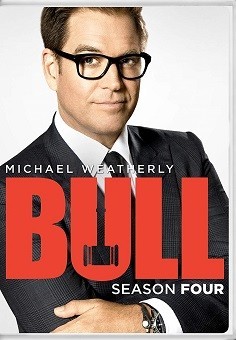