There is a lot of energy and athletic dexterity displayed in the cheer routines created for Robert Adetuyi’s Bring It On: Worldwide #Cheersmack, but that’s just about all this made-for-home video sixth continuation of the Bring It On franchise can offer its obvious preteen target audience.

There is a lot of energy and athletic dexterity displayed in the cheer routines created for Robert Adetuyi’s Bring It On: Worldwide #Cheersmack, but that’s just about all this made-for-home video sixth continuation of the Bring It On franchise can offer its obvious preteen target audience. Otherwise, the lame framing story and overaged actors playing teens are more tiresome and irritating than they are entertaining, and it’s a long eighty minutes before we finally get to the face-off between rival cheer squads that the film has been building toward from the start.

Rebels head cheerleader Destiny (Cristine Prosperi) has guided her squad to three national championships, but a masked rival cheer squad named The Truth posts an internet smackdown challenge to the Rebels which goes viral and results in many of their fans turning on them and Destiny’s own squad deciding that she’s relying too much on worn out routines without accepting any input from them with fresh, new ideas. Even Destiny’s best friend Willow (Gia Lodge-O’Meally) falls out with her childhood friend over her rampant ego and stubborn refusal to listen to anyone else. The Internet Cheer Goddess (Vivica A. Fox) suggests that Destiny find ways to mend fences before a worldwide cheerleading competition begins which will feature twenty different teams from twelve different countries including The Truth whose leader turns out to be a major shock to Destiny.

Even with obvious themes regarding the meaning of real friendship and what makes a team actually work, Alyson Fouse’s screenplay couldn’t be more predictable or clichéd. The big shock is supposed to be the identity of the leader of The Truth, but even with a voice distorted and the kabuki masks they’re all wearing, it’s no big surprise who this mysterious cheer squad is. And the romances don’t come as any surprise either with three street dancers recruited into the cheer squad: Blake (Jordan Rodrigues), Jeff (Sven Ruygrok), and Didit (Stephan Lee Benson) pairing off with Destiny, Willow, and blonde airhead Hannah (Sophie Vavasseur). These are supposed to be high school cheerleaders, but there isn’t a school to be seen anywhere in the film and apart from the Cheer Goddess, no adults are present either to help Destiny with her crisis of faith; just palatial homes they all live in and no end to the phones and tablets and electronic gadgetry needed to provide the impetus for the “drama” inherent in the story. The international competition which closes the show features actual cheerleaders from England, Ireland, Singapore, and Costa Rica, but their routines, filled with some amazing amalgamations of cheering, dance, gymnastics, and hip-hop, get shortchanged for the two big set pieces of the event: the face-off between The Truth and the Rebels. Guess who wins?

While they don’t look like teenagers at all and the narrative they’re performing is way beneath their abilities, there’s nothing wrong with the emoting or athletic skills of the film’s stars Cristine Prosperi, Jordan Rodrigues, Gia Lodge-O’Meally, Sophie Vavasseur, Sven Ruygro, Gia Ré, and Stephan Lee Benson, and their slick moves and at certain moments high flying acrobatics deserve praise even when director Robert Adetuyi has overused slow motion to extend and intensify some of the most death-defying tricks. Vivica A. Fox pops in and out as the Cheer Goddess making observational comments over the net and at one point serving as a surrogate mom for the struggling Destiny.

The film has been framed for home video at 1.78:1 and is presented in 1080p using the AVC codec. The image quality is first-rate with sharp, detailed photography and color that’s accurately spot-on, particularly concerning skin tones. Contrast has been applied smartly for a consistent and very pleasing picture, and black levels are excellent. The movie has been divided into 20 chapters.

The DTS-HD Master Audio 5.1 sound mix provides the music-heavy soundtrack with almost continual surround activity with rich bass beats to the hip-hop and rock music coming through loudly and clearly. Dialogue has been well recorded and has been placed in the center channel. Atmospheric effects tend to get placed in the front soundstage rather than being spread around all available channels.

The Look of Bring It On (2:32, HD): director Robert Adetuyi and performers Cristine Prosperi, Jordan Rodrigues, Sven Ruygrok, Sophie Vavasseur, and Vivica Fox talk about the varying production design, costumes, and graffiti art that gives the movie its own identity.

With this being the sixth entry in the Bring It On series, there is obviously a market out there for these clashes of high school temperament filled with acrobatic, athletic cheer routines (a cheerleading variation on the Step Up films which explore similar themes and feature similar rivalries and puppy love romances). The cheer performances are impressive, but the narrative dramatics couldn’t be any more predictable or stereotypical. 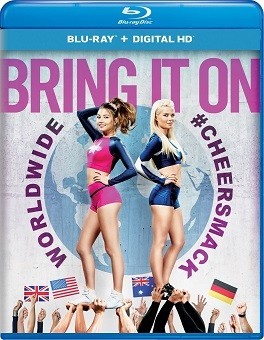