Forum List What's new Dark Style Change width
Log in Register
What's new Search
Menu
Log in
Register
Navigation
Install the app
More options
Dark Style
Close Menu
Posted on June 28, 2017 by Matt Hough
You are using an out of date browser. It may not display this or other websites correctly.
You should upgrade or use an alternative browser.
Underappreciated war film deserves a second look. 3.5 Stars

An overlooked action-filled war film which fell midway between the big hits The Longest Day in 1962 and A Bridge Too Far in 1977, John Guillermin’s The Bridge at Remagen deserves to be better known.

An overlooked action-filled war film which fell midway between the big hits The Longest Day in 1962 and A Bridge Too Far in 1977, John Guillermin’s The Bridge at Remagen deserves to be better known. Dealing with a battle very near the end of the European campaign of World War II, The Bridge at Remagen may not break any new ground in terms of combat footage, unique characters, or plot twists, but its story detailing both the Allied and the Axis points of view during this pivotal moment in the war certainly holds the attention while establishing the necessary rooting interests on both sides of the question.

Completely exhausted by the long combat in Europe, Lieutenant Phil Hartman (George Segal) and his men are ordered by General Shinner (E.G. Marshall) and his ambitious underling Major Barnes (Bradford Dillman) to advance on Remagen, the last remaining bridge over the Rhine into Germany and by now a necessary entry into enemy territory. Meanwhile, Major Paul Kreuger (Robert Vaughn) of the German armed forces is ordered by Hitler to destroy the bridge thus preventing any Allied soldiers from entering Germany’s western border, but Kreuger personally wants to defend the town and the nearby bridge across the Rhine allowing as many Germans as possible the chance to escape before the Allies arrive. As the heated battle commences with heavy casualties on both sides, Hartman and Kreuger both find themselves pawns of the higher ups who have their own agendas no matter how much blood is spilled needlessly.

The screenplay by Richard Yates and William Roberts covers all of the expected tropes of the war film: the Army division made up of a mix of ethnicities, clueless commanders (on both sides) who make command decisions based more on potential glory for them than on common sense tactics and efficiency, the give and take of battle with each side getting to taste moments of victory and defeat, ironic climaxes that sting with their unexpected nature. The narrative through lines on each side of the conflict sometimes get a bit muddled: for the Allies, they want to bomb the bridge at first (an aerial attack is one of the best of the early scenes) and then they decide not to; for the Axis force, it’s just the opposite: Kreuger wants to keep the bridge viable as long as possible and then decides it must be blown at all costs. Yet, even with some of the cloudy objectives, the forward motion of the battle is never in doubt thanks to director John Guillermin’s splendid action sequences shot from an interesting array of vintage points (sometimes removed from the thick of battle and observed from a distance, other times in the thick of the action with bullets and bombs all around) and always clearly conveying the results of various combat thrusts at any given moment. The loss of many lives and the destruction of the exquisite rural architecture is depressingly realistic in the director’s mise–en–scène: war’s cost can never actually be fully accountable, but like the best war films, its depiction goes with the territory.

It’s a juicy role for George Segal as the cynical, world weary Lieutenant Hartman. Jaded, contemptuous of his superiors who don’t have to do the most foolish grunt work, but very supportive of his men who  follow his lead without question, Hartman is one of Segal’s high cinematic water marks. Equally involving is Ben Gazzara’s Sergeant Angelo, eager to make a quick buck as the war begins winding down and with a more sporting personality than the more serious and embittered Hartman. As the Nazi major calling all the shots on his side of the Rhine, Robert Vaughn also delivers a stirring performance. Prideful and intimidating, his Major Kreuger wants to fight until the last man, making his narrative end something of a big surprise. Peter van Eyck has some strong early moments in the movie as General Von Brock, but Hans Christian Blech actually makes a stronger impression as the more practical Captain Carl Schmidt. Bradford Dillman gets to play one of his typical pompous climbers, this time with a negligible southern accent as Major Barnes. E.G. Marshall doesn’t have much time to build character as General Shinner in only a couple of scenes. Bo Hopkins, Robert Logan, and Matt Clark get some spotlight moments as enlisted soldiers carrying out their orders, sometimes with dire consequences.

The film’s Panavision aspect ratio of 2.35:1 is faithfully rendered in a 1080p transfer using the AVC codec. Sharpness is excellent throughout, and color saturation levels are rich and expertly delivered. Skin tones are realistic. Black levels are wonderfully deep. Apart from one moment where kaleidoscopic color damage comes out of nowhere at the beginning of a sequence and then just as suddenly disappears, there are no age related anomalies to distract from the unfolding narrative. The movie has been divided into 24 chapters.

The DTS-HD Master Audio 2.0 mono track offers outstanding fidelity including some impressive low end bass for a film of this vintage. Dialogue has been well recorded and has been mixed expertly with Elmer Bernstein’s involving background score and the numerous atmospheric effects which are part and parcel of any war film. No problems with hiss, crackle, flutter, or popping are present in the mix.

Six-Page Booklet: contains some color stills, original poster art on the back cover, and film historian Julie Kirgo’s perceptive analysis of the movie.

An underappreciated war film that deserves a second look, The Bridge at Remagen has been brought to Blu-ray with an excellent transfer that features very good visuals and a strong mono soundtrack. There are only 3,000 copies of this Blu-ray available. Those interested in purchasing it should go to either www.twilighttimemovies.com or www.screenarchives.com to see if product is still in stock. Information about the movie can also be found via Facebook at www.facebook.com/twilighttimemovies.

It's a good disc, and given that the DVD was non-anamorphic it's a must have for fans.

Yeah, I need to watch my BD in the very near future.
C

Finally watched this one. Good World War II movie! My rating: B+. Very good score by Elmer Bernstein.
You must log in or register to reply here. 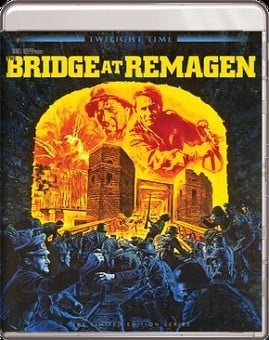