One of the great made-for-television movies 4.5 Stars

Buzz Kulik’s tender, touching made-for-television examination of the brief but meaningful friendship of pro football legends Gayle Sayers and Brian Piccolo gives Brian’s Song the legitimacy usually then only afforded to feature films. Winner of five 1972 Emmy Awards including Outstanding Single Program of the Year, Brian’s Song has lost none of its humor or heart in the several decades since it first premiered. Even a mediocre 21st century remake hasn’t dulled the impact of this original version.

Drafted in 1965 for the Chicago Bears, All American college running backs Gayle Sayers (Billy Dee Williams) and Brian Piccolo (James Caan) find themselves vying for that starting position during their rookie season. Different in many ways, the two men begin as friendly rivals and the first interracial roommates in the NFL but become closer as they spur one another on to be the best player each can be. After earning Rookie of the Year honors, Gayle sustains a knee injury and is replaced by Brian in the starting lineup, but despite finally achieving what he’s always dreamed of, Brian makes it his job to assist Gayle in rehabilitating his knee. When Gayle returns to the lineup, Brian is moved to another position by head coach George Halas (Jack Warden) so that they can both be in the starting lineup, but fate deals Brian his own health challenges which may mean the end of his football career as Gayle does what he can to keep up his best friend’s spirits.

Based on Gayle Sayers’ memoir I Am Third, the Emmy-winning teleplay by William Blinn mixes practical jokes and quieter, more heartfelt moments superbly as we get to know the painfully shy Sayers and the gregarious Piccolo, each man bringing forth his own natural gifts to help the other become the best version of himself possible. Director Buzz Kulik does what he can to make his leading actors believable as football players (modern high resolution televisions reveal that both men, while in excellent shape, were about eighty pounds too light to play in the NFL) by showing the men engaged in drills and practices with legitimate members of the Chicago Bears (yes, Abe Gibron, Jack Concannon, Ed O’Bradovich, and Dick Butkus are all in plain view for fans of that era) and also utilizes official NFL footage showing the real Sayers and Piccolo doing some dazzling on-field play. Kulik also doesn’t shy away from the more tender and tear-jerking aspects of the story though to his credit, many of these scenes are enlivened by a wisecrack or a putdown to ease some of the overwhelming emotions of the latter third of the story.

While both leading actors were nominated for the Emmy Award for their outstanding performances (won that year by Keith Michell for the “Catherine Howard” episode of The Six Wives of Henry VIII), Billy Dee Williams gets the greater opportunities for showcasing the gamut of his emotions as the shy Gayle blossoms under the outgoing tutelage of the loquacious Brian Piccolo. James Caan was enjoying the greatest year of his career with this Emmy nomination and the Oscar nomination he earned that year for The Godfather. He’s picture perfect casting as the brash practical joker who must heartbreakingly deal with an end to his cherished career amid a dire health diagnosis. His final scenes with Williams’ Sayers in his hospital room are among the most heart-tugging and emotional ever filmed as Brian’s Song was in its day not only the most discussed made-for-television film ever but also among the most highly rated up to that time (it even had a brief theatrical run due to its popularity). Jack Warden earned the Supporting Actor Emmy that season for playing earnestly George Halas, hardened but concerned head coach of the Chicago Bears. Shelley Fabares and Judy Pace do fine as the loving, supporting spouses of Piccolo and Sayers respectively.

Framed in its television aspect ratio of 1.33:1, this 1080p transfer (AVC codec) looks better than it ever has before with excellent clarity of image and rich, realistic color reproduction. Contrast has been dialed in perfectly. The lower resolution NFL footage incorporated into the movie definitely contrasts to the freshly filmed scenes with softer focus, drabber color resolution, and some video artifacts, but one expects that and is not surprised by the differences. The movie has been divided into 10 chapters.

The DTS-HD Master Audio 2.0 mono sound mix is typical for television broadcasts of that era. Dialogue is mostly discernible (Piccolo’s mumbles in his weakened condition may require the listener to turn on the SDH subtitles) and has been mixed with surety with Michel Legrand’s Emmy-nominated and Grammy-winning music score and the expected sound effects. There are no issues at all with audio anomalies such as hiss, crackle, pops, and flutter.

Audio Commentary: stars James Caan and Billy Dee Williams reminisce about the making of the film though their memories only recall so much and there are long gaps of silence as the two become engulfed in watching the film again which they freely admit they hadn’t seen in a long time.

Gayle Sayers: First and Goal (10:23, HD): the Hall-of-Famer recalls his college and professional football careers, his admiration of Coach Halas, and his friendship with Brian Piccolo admitting to some of the dramatic license the film took in comparison to the real story.

Don’t forget the song ”The Hands of Time.” It evokes feeling that must be universal. 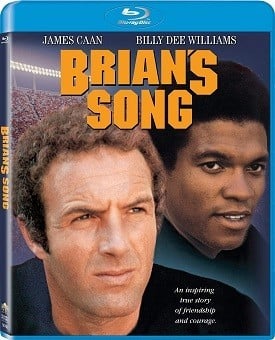