Posted on November 13, 2019 by Todd Erwin
Inspirtational but predictable 4 Stars

Brian Banks tells the Hollywoodized true story of the famed former football player’s attempt to clear his name of a crime he was wrongly convicted of while a teenager.

In 2002, Brian Banks (Aldis Hodge) was a junior in high school, all set to play for USC on a football scholarship. Being only 16 years old, he agreed to escort a young girl, Kennisha (Xosha Roquemore), who shared a mutual attraction, to the restrooms across campus in a building known as a make-out zone. When that mutual make-out session is interrupted and Brian, in fear of getting caught, rejects the young girl and heads back to class. The next thing he knows, he under arrest and sitting in a court room being offered a plea bargain by his lawyer to plead “no contest” to rape charges, who tells him that he’ll likely only get probation and can move on with his life. After agreeing to the pleading “no contest” to the judge, Brian is sentenced to six years in prison, followed by five years of probation, and must register as a sex offender for the rest of his life. Finally out on probation, his parole officer (Dorian Missick) places a tracking device on his ankle, telling him to stay away from schools and parks, including the community college where Brian has been attending and playing football. Unable to find employment, Brian reaches out to attorney Justin Brooks (Greg Kinnear) who runs the non-profit California Innocence Project that tries to get the wrongfully imprisoned exonerated. Brooks tells Brian that since he plead “no contest” and there was no trial, trying to get his conviction overturned is especially tricky, and needs some very compelling evidence, such as the victim admitting she lied about the incident, to even have a judge look at possibly overturning the ruling.

Based on a true story, we know going in (even if we are unfamiliar with it) what the outcome will be. It is the nature of the beast, but director Tom Shadyac (Patch Adams, Bruce Almighty), screenwriter Doug Atchison (Akeelah and the Bee), and the performances by Aldis Hodge (Leverage, Straight Outta Compton) and Greg Kinnear (Invincible, Little Miss Sunshine) are what raise Brian Banks above the level of made for TV melodrama. Hodge and Kinnear really drive the inspirational elements of the story, and it is that road to redemption that makes the film worth watching.

Brian Banks is another terrific looking Blu-ray from Universal. The 1080p AVC-encoded transfer is vibrant and richly detailed when it needs to be (the lush green fields in the scene that bookmarks the story are absolutely gorgeous). The prison scenes are darkly lit but use light as a form of inspiration to Banks, and is an excellent example of how well contrast is handled on this release.

This is a very dialogue-driven movie, but the default DTS-HD MA 5.1 track does get to flex its muscles from time to time. Surrounds are used to extend John Debney’s score as well as atmospherics, plus some nice discrete effects where needed, such as people walking in the stairwell above or crowd noise during a football game. The occasional hip-hop song gets some nice low-end enhancement from the LFE channel, too. Dialogue is clear and understandable throughout.

The Story Behind “Brian Banks” (1080p; 1:42): This is a very brief Behind the Scenes-style trailer and nothing more that really does not have a great deal of content.

Brian Banks could have been nothing more than a standard TV-Movie melodrama, but it is the performances of its two stars that help it rise above the material. Universal’s presentation on Blu-ray is exceptional, but the special features aren’t all that special. 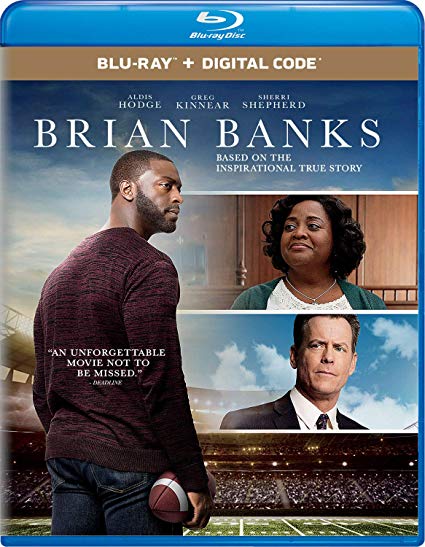