Forum List What's new Dark Style Change width
Log in Register
What's new Search
Menu
Log in
Register
Navigation
Install the app
More options
Dark Style
Close Menu
Posted on August 6, 2018 by Todd Erwin
You are using an out of date browser. It may not display this or other websites correctly.
You should upgrade or use an alternative browser.
Predictable and derivative 3 Stars

Gabrielle Union (Being Mary Jane, The Birth of a Nation) stars in Breaking In, a home invasion thriller directed by James McTeigue (V for Vendetta, Survivor).

When her father is killed in a hit and run accident (or was it?) while jogging one morning, Shaun Russell (Gabrielle Union) packs up the kids and heads to her father’s estate, hoping to get it listed with a realtor and liquidated as soon as possible. The estate, as it turns out, is like a fortress, equipped with state of the art security and surveillance, along with bulletproof windows and surrounded by acres of woods. While outside ordering pizza on her phone, four men led by Eddie (Billy Burke) enter the house and take the kids hostage. The ransom – provide the location and combination to the safe containing $4 million dollars in cash within the next 90 minutes. It is up to Shaun’s maternal instincts to find a way to outwit the invaders, break in to the seemingly impenetrable house, and free her children.

As Breaking In unfolds (and don’t mistake this for the safe-cracking comedy starring Burt Reynolds from 1989 or the under-rated and little-seen dramedy TV series starring Christian Slater from 2011-2012, both bearing the same title), I started asking myself if I had seen this one before. Since this was released theatrically this year, and I rarely make it into civilization to see a movie in an actual theater, I knew I hadn’t. Suddenly, it dawned on me that I had seen quite a few movies that had similar plots, movies like Hostage with Bruce Willis or Panic Room with Jodie Foster, where the story and the villains were at least slightly smarter (in the case of Hostage). Ryan Engle’s screenplay (possibly unknowingly) borrows heavily from Hostage, the big twist being the momma bear and her instincts kicking in to save her children regardless of the cost. Gabrielle Union, as an actress, deserves better material than this, and it doesn’t help that Billie Burke’s Eddie is not all that threatening and can’t control his team of morons that he brought along for the heist. Director James McTeigue does what he can with the material provided, effectively providing the audience with a somewhat entertaining but derivative 90 minutes of escape. This disc contains both the original PG-13 theatrical cut and an Unrated “Director’s Cut,” with the latter running just thirteen seconds longer. The big difference – more F-bombs uttered by the villains in the “Director’s Cut.”

Universal’s 1080p AVC-encoded transfer retains the film’s intended theatrical aspect ratio of 2.39:1, and is one of the best-looking Blu-ray’s I’ve seen recently. Shot primarily on the Arri Alexa Mini at 2.8k resolution, the digital photography offers a clean image with incredible fine detail, such as the various architectural textures of the mansion, inside and out, including woodwork, stonework, etc. Colors are vivid and well-saturated without blooming, especially the lush greens of the landscape and various color palettes of the different rooms inside. Contrast is exceptional, and that’s a good thing since most of the film takes place at night, allowing for deep blacks and well-defined shadow detail. There was one minor issue of aliasing early on, but that was brief and barely noticeable.

The included DTS-HD Master Audio 5.1 track is serviceable, but nothing to really get excited over. Dialogue is clear and understandable throughout, with the possible exception of the low-volume newscast running in the background during the opening shot. Sound effects and music are spread rather evenly across the fronts and to the rears, with decent bass response. The track does its job and really nothing more.

At first glance, it appears that Breaking In has a decent set of extras. Unfortunately, most of them come off as standard EPK fluff, with Gabrielle Union’s interviews shot in a completely different style, as if they were shot for an infomercial.

Audio Commentary with Director James McTeigue and Writer Ryan Engle: The track can be listened to regardless of which version you are watching, and the two discuss at great length the process of making the film and McTeigue even asks Engle early on how he felt about a scene being deleted.

Digital Copy: An insert contains a code to redeem a digital copy of the Unrated version on Movies Anywhere.

Breaking In is derivative and predictable, and the Special features are nothing to write home about. The real plus is the video transfer, which is top-notch. 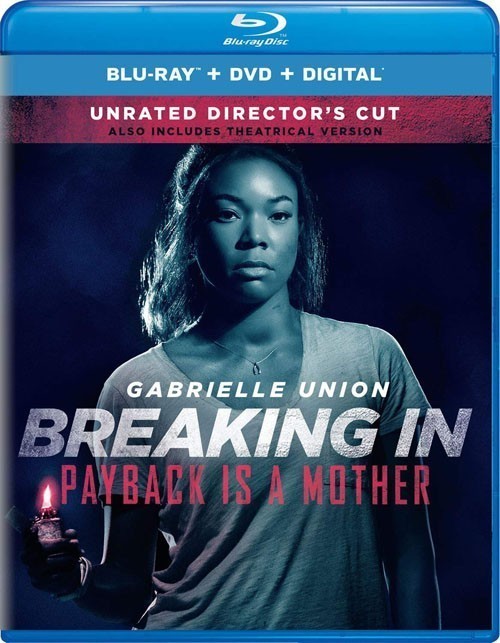