It used to be called “mid-life crisis,” but more modern sociologists have now deemed it “status anxiety”; in either case, it’s the focus of Mike White’s existential dramedy Brad’s Status.

It used to be called “mid-life crisis,” but more modern sociologists have now deemed it “status anxiety”; in either case, it’s the focus of Mike White’s existential dramedy Brad’s Status. Occasionally meandering but certainly also telling in terms of today’s generation reaching that mid-century age mark, Brad’s Status scores some hits and misses in telling its personal story of a father gaining perspective on his life as he nears fifty.

Brad Sloan (Ben Stiller) has a satisfying career as the head of his own non-profit organization and a comfortable marriage to wife Melanie (Jenna Fischer) in Sacramento, but his middle class lifestyle is not quite what he imagined for himself during college years that were so full of hope and optimism. Sloan keeps comparing his life to the uber-wealthy and successful careers of his four college friends (Mike White, Luke Wilson, Jemaine Clement, Michael Sheen) wondering what life would be like to have their luxuriously  glamorous jobs and lives. On a tour of two Massachusetts-based universities with his college-bound musical prodigy son Troy (Austin Abrams), various circumstances force Brad to reconnect by phone or in person with his former buddies, and he soon begins to question whether he has failed or whether he is in some ways the most successful of them all.

Director Mike White’s screenplay is made up primarily of interior monologues interspersed with memories of times past and fantasies about the lives of his former buddies and how his life might have been different had the dice rolled in another combination, all of this happening in his mind as he drifts in and out of his tours with his son of Harvard and Tufts universities. For parents of a certain age, it’s easy to identify with the pains and pleasures that Brad endures during this week even though it doesn’t come as much of a surprise that the four former friends/now mere acquaintances  that he’s so envious of have their own crosses to bear that he slowly becomes aware of as the weekend progresses. The script takes occasional jabs at opportunists, status snobs, misconceptions of importance, and overt ostentatiousness, but the satire is never really biting. Mike White’s direction is fairly mundane; whether in fantasy or in reality mode, there’s nothing particularly showy or unique about his camera style, but both college campuses look quite lovely and inviting bringing to mind campuses of decades gone by.

Ben Stiller and Michael Sheen have the meatiest roles in the movie. Stiller vacillates between covetousness and satisfaction as various events happen to him and his son during the visits, but he mostly underplays effectively. Michael Sheen is the show’s peacock, a media celebrity who’s so full of himself he isn’t aware of his own unctuousness. Austin Abrams is also very laid back and quite appealing as understated son Troy who doesn’t throw his musical gifts up to his father (though the script sometimes makes us feel like Brad doesn’t know his son at all). Jenna Fischer is okay as the mom sidelined by work and only in a few scenes in the movie, but the most important female role is Harvard junior Ananya played by Shazi Raja, a talented flautist who regales us with Antonin Dvorak’s “Humoresque” in a concert sequence but also shows herself to be wise beyond her years as she and Brad have a quiet drink together after Troy has gone to bed. Luke Wilson also makes much of his one juicy scene on the telephone with Brad, his hedge fund manager going through personal and professional crises about which Brad was completely unaware.

The film has been framed at a 2:1 aspect ratio and is presented in 1080p resolution using the AVC codec. Sharpness is outstanding throughout with the extra detail quite obvious to read in the movie’s numerous close-ups on all of the characters’ faces but particularly Ben Stiller’s. Color is rich and pleasing along with being quite believable in saturation levels and skin tones. Contrast has been dialed in perfectly. The movie has been divided into 20 chapters.

The DTS-HD Master Audio 5.1 sound mix is a simple but effective audio presentation. Dialogue has been well recorded and has been placed in the center channel. Ambiance appears in the fronts and rears when necessary, but the real surround experience is provided by Mark Mothersbaugh’s playful and evocative background score.

A Look at Ben Stiller as Brad (2:32, HD): a vignette about the title character and Ben Stiller’s approach to playing him. Among those contributing are writer-director Mike White and actors Luke Wilson, Michael Sheen, and Jenna Fischer.

Mike White on Directing His Own Script (2:31, HD): White discusses his goals for the film and is praised for his writing and directing talents by producer David Bernad and actors Michael Sheen, Jenna Fischer, and Luke Wilson.

Promo Trailers (HD): I Do Until I Don’t, Home Again, Marshall, and A Bad Mom’s Christmas.

A subdued but thoughtful peek into the psyche of a forty-seven year old man contemplating both his past and his future, Brad Status is worth a look even if it’s only a rental. Fine performances highlight the comedy-drama of a father and son at a turning point in their relationship when the boy becomes a man and the father must begin to see him with new eyes. 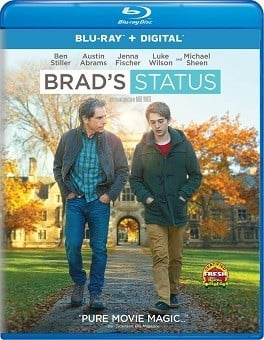