John Singleton’s directorial debut, Boyz n the Hood, arrives on 4K UHD Blu-ray with some new extras, including a tribute to the late director.

The early 1990s were an interesting time at Columbia Pictures. The studio was introducing the world to a group of new, young filmmakers that included Robert Rodriguez (El Mariachi, Desperado) and one year earlier, John Singleton. At the age of 24, just a few months after graduating from USC Film Writing Program, Singleton wrote and directed the semi-autobiographical Boyz n the Hood, telling the story of three young men in South Central Los Angeles having to deal with gang violence, peer pressure, and essentially fighting their way out of the ‘hood.

Tre (Cuba Gooding, Jr.), Ricky (Morris Chestnut), and Doughboy (Ice Cube) are the three teenagers. Tre is probably the luckier one of the three, living with his working father, Furious (Larry Fishburne), who guides him through life, helping him make the right choices. Brothers Ricky and Doughboy are not so lucky, living with their single mother who favors Ricky, who is on track to receive a football scholarship from USC, while Doughboy hangs out with his gangster friends and has been in and out of juvenile hall. Boyz n the Hood is more of a character study and social commentary than an actual story, with many vignettes taken from Singleton’s own life. What is surprising and somewhat startling is how much the film is still socially relevant today, although some of the speeches that Furious makes could be considered somewhat racist by today’s standards.

Boyz n the Hood was shot on 35mm film, and for this release, Sony has gone back and scanned the camera negative in 4K resolution with HDR10 high dynamic range. The result is a much more film-like transfer than the still very good Blu-ray release from 2011. Colors are more consistently natural and vivid, and the increased resolution offers up more detail and depth in the picture. Film grain is organic but never distracting. The film still suffers, though, from some occasional softness, haze, and moiré patterns in a few shots that are obviously baked into the source material.

Boyz n the Hood was originally released theatrically in stereo surround, then re-mixed in 5.1 for its DVD and Blu-ray releases, and now in Dolby Atmos for this 4K release. The Atmos mix builds on that earlier 5.1 mix, placing many of the sounds much more precisely within the listening area. Overheads are used quite frequently for helicopter flyovers, and LFE adds a very deep low-end to much of the rap music that is often heard blaring from cars. Dialogue is clear and understandable throughout. A 5.1 and 2.0 stereo mix have been included in DTS-HD Master Audio.

Sony has included three new or previously unreleased bonus content that can be found on the 4K UHD Blu-ray edition, with the included 2011 Blu-ray release rounding out the archival special features.

UHD Blu-ray
John Singleton Tribute (1080p; 6:16): John Singleton passed away at the age of 51 on April 28, 2019. Cast and crew who worked with him discuss his career in this touching tribute that also includes clips from the three films he made at Columbia Pictures.

Theatrical Press Conference (upscaled 1080p; 24:26): Writer-Director John Singleton is interviewed at a press conference following a series of gang shootings that occurred at or near theaters screening the film in the summer of 1991.

Original Behind the Scenes Featurette (upscaled 1080p; 4:57): An EPK piece produced prior to the film’s theatrical release.

Boyz n the Hood a modern classic, still very relevant today as it was upon its initial theatrical release.

Thanks for the great review @Todd Erwin. I'll definitely be ordering this one.

John Dirk said:
Thanks for the great review @Todd Erwin. I'll definitely be ordering this one.
Click to expand... 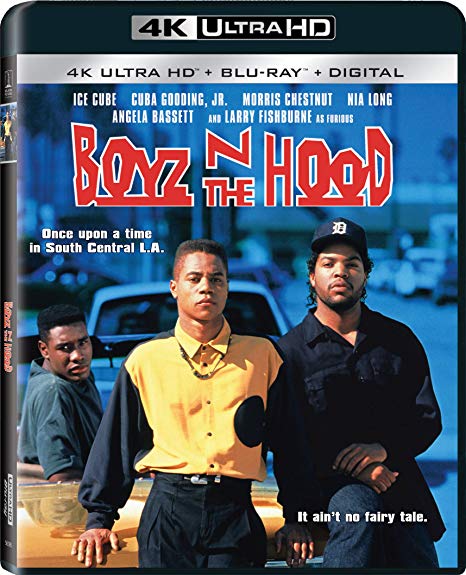