Bowling For Columbine, Michael Moore’s Academy Award-winning examination of gun violence in America, makes its Blu-ray debut from the Criterion Collection. Though the film is over fifteen years old, and while some of its more gimmicky moments may not play as smoothly as they once did, the majority of the film still feels relevant today.

The word “documentary” often conjures a specific image in people’s minds. Often, there’s an expectation that a documentary will chronicle specific events as they’ve unfolded, with those events presented without comment or judgment, so that the viewer can make up their own mind. There’s an expectation that a documentary should present truth without editorialization, that it should be the filmmaking equivalent of an encyclopedia entry, rather than something from the op-ed page.

That’s not what Michael Moore does.

It is perhaps best to think of Moore’s films as being “nonfiction” rather than “documentary,” for Moore’s style is to use his films as a form of advocacy. Moore’s goal, as a filmmaker, is not to present a series of unconnected facts and to ask the viewer to draw a conclusion. Moore’s intent, rather, is to present a thesis and then build a case to prove it. This may be disorienting for some viewers who come in with different expectations for what a documentary should be, but may be better appreciated so long as the viewer understands that they are watching the filmmaking equivalent of a personal essay.

Originally released in 2002 in the wake of both the 1999 Columbine school shooting in Colorado and the September 11, 2001 attacks, the film is Moore’s examination of gun culture in America. It is a huge, sprawling piece, with Moore leapfrogging from the shooters’ alleged visit to a bowling alley prior to their shooting spree, to acts of domestic terrorism perpetrated by American citizens, to foreign wars and police actions undertaken by the American military. Moore seeks to examine the big picture, looking at a variety of potential causes as he tries to understand what could have led two high school students to perpetrate such a horrendous act of violence.

Frankly speaking, there are parts of the film that have not aged as well as others. While Moore can be an enormously sympathetic presence, offering comfort and understanding to his interview subjects, at other times, he is capable of being equally glib and condescending. An interview with then-National Rifle Association president Charlton Heston was seen as an ambush at the time of the film’s release. Viewed today, it is not so much Moore’s interview itself with Heston that feels problematic. Heston seemed to expect a friendly interview and was not prepared for Moore’s tougher line of questioning, but Moore’s line of questioning does not seem particularly out of bounds when one considers that Heston was the head of an advocacy organization. What does feel uncomfortable is when Heston moves to end the interview, and Moore persists in following Heston around the property as Heston tries to retreat. Moore’s point, that Heston’s advocacy seems disconnected from the reality that gun violence victims can face, and that it was insensitive for Heston to appear at a pro-gun rally in the Columbine community in the immediate aftermath of the shooting, would probably have been better made if Moore had let the interview stand on its own without the added gimmicks.

But there are times when a good gimmick can go a long way, and when it works, it really works. There’s a sequence that remains stunning to this date, when Moore meets with two Columbine victims who suffered profound injuries due to bullets originally purchased at K-Mart. Taking the two students to K-Mart headquarters and forcing the company’s public relations people to acknowledge their presence, the stunt does lead to K-Mart making a commitment to phase out the sale of the handgun ammunition that led to those injuries. It’s an example of how being persistent and outspoken can affect change. The reason that this works better than the Heston exchange is because Moore is seeking a more tangible goal.

Moore is also a master at giving people enough rope to hang themselves. When he approaches his subjects in this manner, rather than trying to trap them in “gotcha” exchanges, he’s much more successful. One interview subject, for instance, claims to have been unfairly persecuted by being singled out as the number two potential threat in the school when he was a high school student. On the face of it, it seems concerning that a school would label a student in that way. But when Moore allows him to continue speaking, the subject continues on to say that he was practicing making all sorts of bombs and that his classmates knew it; furthermore, he was disappointed that he wasn’t considered the number one threat and annoyed that the school wouldn’t disclose the name of whoever was higher on the list than he was. It’s this type of exchange that Moore excels at. Ultimately, what his subjects choose to reveal about themselves says more than what Moore extracts when he resorts to badgering them.

The most compelling question that Moore raises in the film is the one that remains unanswered. At one point, Moore displays a series of statistics to show how other developed nations, which have the same or similar violent histories and/or access to guns that Americans do, have significantly less gun violence than America does. Moore wonders out loud why this is. He spends a good portion of the film looking into multiple possibilities, and ultimately Moore questions if a culture of fear is the underlying culprit. The disparity between the statistics in America and other developed nations can’t be easily ignored or dismissed. Looking back on the film nearly two decades after its original release, this is the point that remains most relevant today.

Bowling For Columbine is presented in its original aspect ratio of 1.85:1. Though finished on 35mm film, the movie is cobbled together from a variety of sources, including different film and video formats, many of which were standard definition sources. Simply put, the nature of this film’s creation means that it will never be a reference quality presentation. But with that caveat out of the way, the transfer here is nearly invisible. On very rare occasions, there might be a slight bit of speckling or a tiny scratch or two on the interpositive used to create this transfer, but for the most part, it’s a transparent effort. Though the quality of the imagery frequently shifts, these changes are never jarring, and this disc is very faithful to the film’s original theatrical presentation.

MGM’s original DVD release included a 5.1 soundtrack, but unfortunately, that option has not been included on this Criterion release.

Michael Moore Makes A Movie (34:59, HD) – A brand new featurette created by Criterion for this release that examines Moore’s filmmaking process. Moore and his frequent collaborators talk about working on Bowling For Columbine and compare and contrast the experience of working on this film with Moore’s other productions. This is a particularly good retrospective on the film.

Film Festival Scrapbook (12:00, originally SD) – A compilation of interviews that Moore gave during the film’s original 2002 press tour in Cannes, Toronto and London.

Charlie Rose (24:47, originally SD) – An excerpt from the October 8, 2002 broadcast of the Charlie Rose’s PBS show with Moore appearing as a guest. They have a lively and interesting discussion about both the film and the politics and news of the day.

Moore Returns To Colorado (25:09, originally SD) – Moore appears at the University of Denver on February 26th, 2003, approximately six months after the release of the film, for a lecture.

Trailer (01:58, HD) – The original theatrical trailer utilizes many of the film’s most humorous moments in a very effective manner.

Booklet – The fold-out booklet includes a new essay by journalist Eric Hynes, notes on the transfer, and art from the production.

Michael Moore’s Bowling For Columbine is a film which sadly still feels relevant today. Though the film’s use of a variety of sources of varying quality means that this will never be a reference presentation, the film looks and sounds as it did on opening night. In addition to the new transfer, this Criterion edition also contains an excellent new featurette on the making of the film, along with most (but not all) of the bonus features from the original MGM DVD release. Fans of the film may wish to hold on to their older DVD to keep that release’s 5.1 soundtrack, commentary track (which was recorded by Moore’s production office interns and was frankly a chore to listen to) and a few other minor features that didn’t carry over. Ultimately, the new documentary (“Michael Moore Makes A Movie”) is a fine addition to the set and of higher quality than just about anything missing from the original release.  (The omission of the 5.1 track is baffling.)  More than fifteen years after its original theatrical release, Criterion has put together a worthwhile Blu-ray edition of Bowling For Columbine. 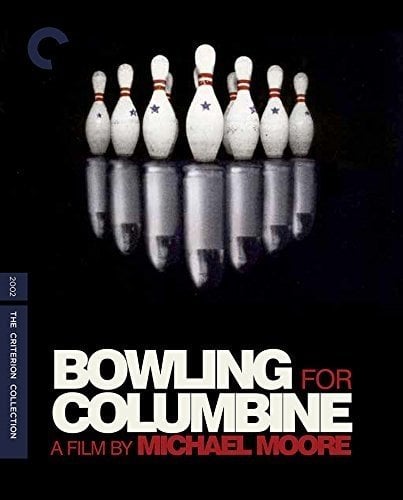