Forum List What's new Dark Style Change width
Log in Register
What's new Search
Menu
Log in
Register
Navigation
Install the app
More options
Dark Style
Close Menu
Posted on February 3, 2016 by Matt Hough
You are using an out of date browser. It may not display this or other websites correctly.
You should upgrade or use an alternative browser.
A dry but compelling portrait of a man and an era 4 Stars

Hal Ashby’s depiction of depression-era America in the 1930s combined with a vivid if subdued biographical portrait of the turning point in the life of troubadour Woody Guthrie makes Bound for Glory one of the more unique biographical films ever made.

Hal Ashby’s depiction of depression-era America in the 1930s combined with a vivid if subdued biographical portrait of the turning point in the life of troubadour Woody Guthrie makes Bound for Glory one of the more unique biographical films ever made. Featuring a wealth of tunes penned and made popular by the original travelin’ man and offering star David Carradine perhaps the best role in a film he ever received, Bound for Glory may be too deliberately paced and passive for the average filmgoer (it was not a box-office hit in its original release), but there are numerous pleasures to be found in this long, exacting look at the heart of America at a time of one of its greatest struggles.

Struggling to make ends meet in a dying Texas town in 1936, Woody Guthrie (David Carradine) heads west to California promising to send for wife Mary (Melinda Dillon) and his two daughters after he makes good in what was thought to be America’s “Promised Land.” After an endless trek and numerous perils experienced on the road, Woody lands in Los Angeles only to find there’s little to no work for the majority of fruit pickers there who make pennies a day for their labors and are constantly under attack by the farm owners who don’t want them to unionize for higher pay. Woody makes friends with union organizer Ozark Bule (Ronny Cox) who is impressed with Woody’s vocals, guitar playing, and original songs and who gets him an audition at a local radio station that puts Woody on the radio for $35 a week. Though Woody likes the money and is grateful to be able to send for his family after months away from them, his heart is never still knowing that his good fortune isn’t much help for the many thousands still struggling to make a living wage, and when his protest songs don’t go over well with his radio sponsors, he knows he’s going to have to find some other outlet for his overpowering feelings of rage and guilt.

Robert Getchell’s screenplay spends the first half hour with Woody trying to make ends meet in his dusty Texas town (everything from sign painting – his specialty – to being an amateur medium and making some simple stabs at psychoanalysis). Haskell Wexler’s Oscar-winning cinematography (which was also one of the very first films to use the newly invented Steadicam for some shots) vividly pictures the dusty, brutal landscape these survivors are coping with (an awesome long shot of an impending dust storm overpowering the town is horrifically majestic) and then proceeds in the next half hour to show us the southwest via roads, railways, and on foot complete with both kindly strangers, indifferent police, and brutal railyard workers out to punish any rail jumpers they can catch. Along the way, we hear many of the famous ditties Woody Guthrie would one day become famous for: “So Long,” “Take It Easy,” “Lonesome Valley,” “Howdido,” “Blowin’ Down the Dusty Old Road,” “This Train,” and, of course, “This Land Is Your Land” which we hear come together in bits and snatches throughout the film. It takes almost ninety minutes to get Woody into that radio station audio booth for his singing career to take off, but even then, this is not a rags-to-riches show biz biography. Woody’s restless spirit and dissatisfaction with the status quo for the common man won’t allow that, and director Hal Ashby, true to his style, keeps the camera close in on faces throughout the film’s two-and-a-half hours.

Though David Carradine’s voice isn’t as hauntingly melodic as his brother Keith (who had won an Oscar the previous year for penning and performing “I’m Easy” in Nashville), he imbues his Woody Guthrie with the decency and good natured simplicity that makes him an easy character to like even if we never quite figure out that inner drive that compels him to keep going instead of staying put and enjoying what he’s achieved (Carradine won the National Board of Review’s Best Actor award for his performance). Melinda Dillon offers an outstanding portrait of Guthrie’s wife, frightened that their good fortune could ebb away as quickly as it had come upon them, and she also surprisingly appears chameleon-like as Guthrie’s singing partner Memphis Sue in the Los Angeles radio studio scenes. Ronny Cox is quite memorable as the driven labor organizer (and radio singer) Ozark Bule while Gail Strickland has a couple of impressive scenes as a rich Los Angeles widow who offers Woody nourishment in a charity soup kitchen and catches his eye. Randy Quaid has some touching moments as another honest, innocent victim of the famers’ greed in deterring unionization for the workers while Ji-Tu Cumbuka makes the most of his brief scenes as a hobo who offers a kind hand to Woody when he tries to ride the rails for the first time.

The film’s theatrical aspect ratio of 1.85:1 is faithfully presented in a 1080p transfer using the AVC codec. Despite light dust specks and debris which never completely go away, Haskell Wexler’s Oscar-winning cinematography is shown to good effect here: everything from the soft, hazy brown conditions of the Dust Bowl scenes to the more vividly clear and detailed California sequences. Color is controlled throughout though skin tones may appear a bit on the brownish side. Black levels are good but not great. The movie has been divided into 24 chapters.

The DTS-HD Master Audio 1.0 sound mix exemplifies the mono mixes of the era with dialogue, music, and sound effects blended together smoothly without mishap. Leonard Rosenman’s Oscar-winning adaptation of Woody Guthrie’s tunes give the audio track wonderfully period-appropriate tone which does wonders for setting the scene of the Depression era pictured in the movie. No age-related problems of note make themselves known.

Six-Page Booklet: contains an excellent selection of color stills, original poster art on the back cover, and film historian Julie Kirgo’s trenchant essay on the film.

Bound for Glory is a somewhat dry but nevertheless compelling portrait of a man and an era. While MGM hasn’t done a great job with clean-up on this Blu-ray transfer, the images are still noteworthy and often awe-inspiring. There are only 3,000 copies of this Blu-ray available. Those interested should go to www.screenarchives.com to see if product is still in stock. Information about the movie can also be found via the Twilight Time website at www.twilighttimemovies.com or via Facebook at www.facebook.com/twilighttimemovies.

Haskell Wexler was the DP ,and Oscar winner not Conrad Hall typo

I KNEW that, and I can't believe I made that mistake. Thanks for the reminder.
P

Nonetheless, the combination of both Haskell and Hall would had made for a great showbiz name and duo.
You must log in or register to reply here. 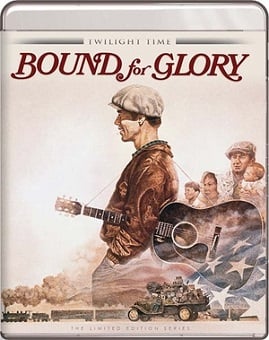