Three animal species indigenous to China get the Disneynature documentary treatment in Lu Chuan’s Born in China, a first-rate documentary featuring rare footage of animals living in regions so remote that the opportunities to film them have proved quite elusive until now.

Three animal species indigenous to China get the Disneynature documentary treatment in Lu Chuan’s Born in China, a first-rate documentary featuring rare footage of animals living in regions so remote that the opportunities to film them have proved quite elusive until now. In their patented style giving names and personalities to their animal subjects, Disney cameramen have captured truly marvelous sequences that wrap up the viewer in the various stories of survival as the circle of life, here as everywhere, continues to be fulfilled.

In the introductory segment to this documentary, narrated with a pleasing sense of wry pleasure and discovery by John Krasinski, a more comprehensive overview of animal life seems to be promised, but a segment on the red-crowned crane seems to have been almost completely abandoned and another examination of antelope herds comes and goes with little fanfare. That leaves three primary species that the film focuses on capturing a year in the lives of a snow leopard family, the mischievous golden snub-nosed monkeys, and a mama panda nursing a cub and finding it difficult to leave motherhood behind, all in remote areas which spread over some of China’s remotest regions.

The snow leopard mother is named Dawa, a fierce predator ruling over her rocky-cragged domain and initially finding providing for her two cubs relatively easy even when facing off without raising a paw against another massive female who attempts to claim the territory for herself. But Dawa’s journey hits hard times with the coming cold weather and an injury which impairs her ability to hunt, and when the spring returns, so does that predatory female now with three male cubs in tow with a renewed sense of purpose and the back-up to make her threat a real one.

The most cuddly adventure is the one with Ya Ya, the overly protective panda mama who must cope with a klutzy cub named Mei Mei, an independent spirit who’s impatient to leave her mother’s firm grasp and begin exploring on her own the thick tree groves where their main food supply bamboo is located. Mei Mei’s instinct for climbing, of course, means heartbreak for Ya Ya meaning her days of motherhood are over, or are they?

The David Fowler-Brian Leith-Phil Chapman-Lu Chaun screenplay not only squeezes great drama from the suspenseful tale of the struggling snow leopard Dawa but they also add a melodramatic flourish to their tale of Tao Tao, a golden snub-nosed monkey ousted from the nest on the birth of his sister and, feeling neglected and unloved, joins fellow orphaned monkeys with no home to call their own. With a carefree life apart from dodging threats from their mortal enemy the goshawk, Tao Tao wants to be independent, but the strange lure of family keeps drawing him back even when it’s clear his father especially has no further use for him.

As in all Disney nature documentaries going all the way the back even decades to their amazingly popular and award-winning True-Life Adventures, the photography is simply astounding. In this age of Planet Earth and its many sequels, nature documentary footage in high definition is rather plentiful, so we sometimes forget that this footage is gleaned from months and sometimes years in the wild trying to garner enough unique situations with rare animals to make these documentaries worth the time and effort to compile them. Born in China certainly succeeds in giving us majestic views of China’s astonishing width and breadth which houses these fascinating creatures that can be seen nowhere else on the planet.

The film is framed at 1.78:1 and is presented in 1080p using the AVC codec. The sharpness of the photography is exemplary, sharp enough to count freckles on the monkeys’ faces and the numbers of hair on the bodies of the leopards and pandas. Color is likewise scrumptious with believable hues that are never pumped for artificial enhancement. Black levels are very rich, and contrast has been consistently applied for an even textural feel to the footage even though much of it was caught over a period of many months rather than in a few days. The movie has been divided into 19 chapters.

The DTS-HD Master Audio 5.1 sound mix is sturdy without being revelatory. John Krasinski’s narration has been clearly and cleanly recorded and has been placed in the center channel. The majority of the surround activity in the film comes via Barnaby Taylor’s all-encompassing music which maneuvers through the hijinks and dangers present throughout the movie. Ambient sounds are mostly placed in the front soundstage.

Panda Suits & Bamboo Shoots (6:27, HD): director of photography Rolf Steinmann and additional photographer Jacky Toon discuss the difficulty of accessing the remote areas of China where pandas live requiring thirty porters to carry equipment to the gnarly forests in an attempt to find a panda family.

Wading through Wetlands (5:22, HD): director of photography Paul Stewart endures millions of mosquitoes and torrents of rain to film the red-crowned cranes who ironically play only a small role in the film’s narrative.

“Everything Everything” Music Video (3:30, HD): the film’s theme song is performed by the American Authors.

Disneynature: Get Inspired! (1:18, HD): a promotional vignette on the Disney Conservation Fund.

Promo Trailer (HD): Dolphins, the next installment in the Disneynature series.

In typically entertaining Disneynature documentary style, Born in China takes us into remote regions of the country looking for real-life stories of various rare species of animals striving to survive, sometimes succeeding and sometimes not. The cinematography is always fascinating to watch, and the movie comes with a firm recommendation.

I had the opportunity to watch this tonight.

My advice to anyone is to watch the film with the sound turned all the way down. Personally, I think the script is one of the worst I've ever heard...and I suffered through a theatrical viewing of DisneyNature's Chimpanzee doc a few years ago! The writing is full of predictable, trite expressions--many of which I anticipated--most of which I groaned after hearing...again and again. I figured John Krasinski was going to be the perfect choice as narrator. But the writing is so bad that I'm not sure any more.

Mind you, the video is extraordinary. Your comparison with Planet Earth efforts is apt. And the bonus features are wonderful viewing. For anyone who purchases the disc: don't miss/ignore them!

I cannot say I didn't enjoy the film. I was constantly amazed at the video the photographers were able to capture. So even though I didn't like the story as told by the writers, I was able to enjoy the story as told by the videographers. Sill a thumbs up from me.
You must log in or register to reply here.
Share:
Facebook Twitter Reddit Pinterest Tumblr WhatsApp Email Link 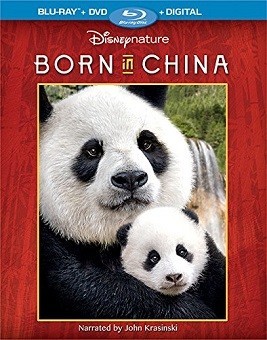