An uneven tearjerker has its moments. 3.5 Stars

A mother’s coming-of-age-story through the auspices of her genius pre-teen son gives hefty dramatic weight to Colin Trevorrow’s The Book of Henry.

A mother’s coming-of-age-story through the auspices of her genius pre-teen son gives hefty dramatic weight to Colin Trevorrow’s The Book of Henry. A domestic dramedy with wonderful performances and featuring key shifts in tone throughout its running time, The Book of Henry will have the viewer alternately laughing, crying, and gripped in suspense at various points of its narrative, the mix of moods surprisingly not detrimental to its overall effect even if it all works out just a bit too pat.

Single mother Susan Carpenter (Naomi Watts), harboring dreams of becoming a children’s book author, works as a waitress alongside her feisty, foul-mouthed family friend Sheila (Sarah Silverman). Taking care of everyone and everything in his own unique way is Susan’s genius older son Henry (Jaeden Lieberher) shouldering the burden of the family finances and making investments which are pushing his mother unknowingly toward the status of millionaire. Protective of his younger brother Peter (Jacob Tremblay) and a tireless supporter of his often self-doubting and sometimes irresponsible mother, Henry careens through his days keeping a detailed notebook of plans, schemes, and information which he knows will someday come in very handy for his mom. When Henry discovers that the family next door holds a dark secret, a stepfather (Dean Norris) who’s sexually abusing his daughter (Maddie Ziegler) who’s in Henry’s class in school, Henry makes it his chief goal to devise a plan to help his friend Christina.

Gregg Hurwitz’s screenplay makes dramatic license a necessary evil in order for the film’s pieces to fall into place (Henry leaves his mother some tapes detailing a step-by-step plan for her to carry out, complete with comments about mistakes she’s making before she makes them; Henry’s a genius but this would make him clairvoyant), but there is no denying that he’s created some compelling characters (particularly the sibling relationship which is one of the most priceless and loving in cinema history), and you’d have to have a heart of stone not to get caught up in the tangle of deep emotions as a twist halfway through the movie shakes up the movie’s forward trajectory. Director Colin Trevorrow spends some quality time showing us the world of the two brothers (school events, adventures in their dream-of-a-treehouse, their nighttime ritual with their mom) making sure the camera captures those magical moments of youthful adventure (ugly experiences as well as joyful ones), but we see their mess-of-a-mom, too, ceding responsibility for their financial well-being to her son, not often setting a good example by excessive drinking, and her often unprofessional work habits. But the second half of the film sees her (of necessity) turn things around leading to the movie’s most ambitious sequence: the climactic confrontation between Susan and Glenn in the woods behind their homes while Glenn’s daughter dances her heart out at the school’s talent show. It’s a gripping sequence which makes the movie’s turning point – Susan’s finally taking control of her own decision making – the impetus for the final scenes in the movie.

Naomi Watts once again plays an interesting and somewhat offbeat character, far less mature than one would wish for the single mother of two children and yet not ever completely losing audience sympathy even with some really poor decisions during much of the movie’s first half. Jaeden Lieberher’s genius Henry plays fairly true though perhaps he’s been made a bit too knowledgeable about everything (he has a serious man-to-man talk with kindly Dr. David Daniels – Lee Pace – that pushes his intelligence into otherworldly realms), but the best scenes are the ones with Jacob Tremblay’s sweet, vulnerable younger brother Peter. They are the best things about the movie. Sarah Silverman plays her outrageous part of the hard talking, hard drinking Sheila completely dead pan even when giving the eleven-year old Henry a kiss full on the lips. Dean Norris is that most dangerous of predators: the average looking good ol’ boy whom no one would suspect of anything. As his damaged daughter, Maddie Ziegler is adequate without allowing much of her misery to rest wearily upon her face. Lee Pace as the doctor, Tonya Pinkins as the school principal, Geraldine Hughes as Henry’s teacher, and Bobby Moynihan as Susan and Sheila’s boss John all give solid support to the principal players.

Shot on film, the movie’s 2.00 theatrical aspect ratio is faithfully rendered in this 1080p transfer using the AVC codec. The excellent sharpness of the transfer allows us to see much detail in the actor’s faces and in their costumes. Color is richly saturated without ever appealing unnatural, and skin tones are just right. Contrast has been masterfully applied for a consistently excellent picture, and black levels are rich and dark. The movie has been divided into 20 chapters.

The DTS-HD Master Audio 5.1 sound mix doesn’t always take advantage of every surround opportunity (that climax in the woods might have contained more ambiance), but the elements which are here are combined with surety. Dialogue has been well recorded and has been placed in the center channel. The spare music score by Oscar-winner Michael Giacchino gets nicely spread through the fronts and rears. There is some ambiance, but more impressive is the momentary use of the LFE channel during one of Henry’s headache scenes when deep bass rumbles ominously to emphasize the extent of his pain.

Promo Trailers (HD): Atomic Blonde, The Beguiled, Victoria & Abdul, The Theory of Everything, and The Danish Girl.

An emotionally satisfying if somewhat far-fetched family dramedy, The Book of Henry plays beautifully on Blu-ray with a rich video transfer and better than average audio. Fans of the actors or the tear-jerking story might want to consider at least a rental for this title. 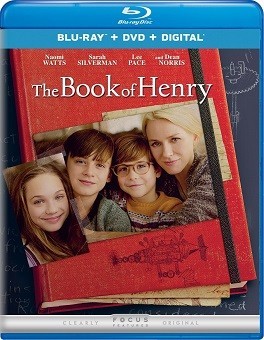