Forum List What's new Dark Style Change width
Log in Register
What's new Search
Menu
Log in
Register
Navigation
Install the app
More options
Dark Style
Close Menu
Posted on December 4, 2017 by Todd Erwin
You are using an out of date browser. It may not display this or other websites correctly.
You should upgrade or use an alternative browser. 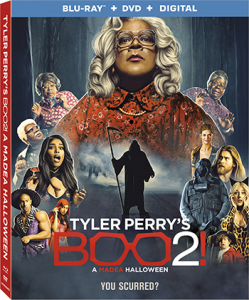 Arrives on Blu-ray™, DVD and Digital January 30 from Lionsgate

SANTA MONICA, CA (December 4, 2017) – Hallelujer! Multimedia powerhouse Tyler Perry is back with Tyler Perry’s Boo 2! A Madea Halloween, scaring up laughs on Blu-ray Combo Pack (plus DVD and Digital), DVD, Digital and On Demand January 30 from Lionsgate. The laugh-out-loud sequel to the smash hit, Tyler Perry’s Boo! A Madea Halloween, is all tricks and no treats when Madea, Aunt Bam, Hattie, and Uncle Joe run for their lives from monsters and goblins haunting a remote campground. Cassi Davis and Patrice Lovely are joined by cast from the first film, including Yousef Erakat (We Love You), Brock O’Hurn (“Too Close to Home”), Lexy Panterra (Pray for Rain), and Diamond White (“Guidance”), in this spooky slapstick comedy.

Have no fear – Madea and friends are back in this screamingly funny follow-up to Tyler Perry’s comedy  hit! When Brian’s (Tyler Perry) daughter sneaks off to attend a party at a haunted campground, Madea, Aunt Bam, Hattie and Joe set out on a hell-arious journey to bring her back, scaring up laughs and striking fear in all monsters, goblins and party animals standing in their way.

Including never-before-seen deleted scenes, hilarious outtakes and two featurettes, the Tyler Perry’s Boo 2! A Madea Halloween Blu-ray™ Combo Pack (plus DVD and Digital) and DVD will be available for the suggested retail price of $39.99 and $29.95, respectively.

The first major new studio in decades, Lionsgate is a global content platform whose films, television series, digital products and linear and over-the-top platforms reach next-generation audiences around the world.  In addition to its filmed entertainment leadership, Lionsgate content drives a growing presence in interactive and location-based entertainment, gaming, virtual reality and other new entertainment technologies. Lionsgate’s content initiatives are backed by a 16,000-title film and television library and delivered through a global licensing infrastructure. The Lionsgate brand is synonymous with original, daring and groundbreaking content created with special emphasis on the evolving patterns and diverse composition of the Company’s worldwide consumer base.