Forum List What's new Dark Style Change width
Log in Register
What's new Search
Menu
Log in
Register
Navigation
Install the app
More options
Dark Style
Close Menu
Posted on March 24, 2019 by Neil Middlemiss
You are using an out of date browser. It may not display this or other websites correctly.
You should upgrade or use an alternative browser.
Bloody good, but bizarrely flawed 4 Stars

Bohemian Rhapsody is a delight from start to finish, but it should come with a warning

“The film you are about to see is as much true as it is a wildly tinkered-with dance through Queen’s history. There are plenty of books that document the true history of events and moments in the life of Queen, but I can’t imagine they would ever make you feel as good as this film, with it’s hybrid of fact and fiction, possibly could.

They’d be telling the truth with that warning because the film is a triumph of music mastery, recognizing the Rock God-like brilliance of Freddie Mercury, with all his human foibles and faults. The journey we take with Mercury and his Queen band mates, from pub stages to crowds of billions, will have you enamored.

“Tell you what it is, Mr. Reid. Now we’re four misfits who don’t belong together, we’re playing for the other misfits. They’re the outcasts, right at the back of the room. We’re pretty sure they don’t belong either. We belong to them.”

In the early 1970’s, young Farrokh Bulsara was toiling away as an airport baggage hand with aspirations of something bigger, greater. A chance encounter with a band he follows becomes the spark that changes all their lives. Farrokh and the band will evolve. Farrokh, the lead singer, will become Freddie Mercury, and the band will become Queen. Together, they will become legend. The film explores their rise to global stardom finds them diving deeper, musically, into the unexpected. Mercury will fall in love, marry, and come to terms with the truth of his heart, and the band will quarrel and quip on their quest for musical freedom, creating an almost unparalleled musical legacy along the way.

Bohemian Rhapsody is a contradiction. On one hand, it’s an incredible piece of feel-good entertainment that carries us through dramatic, sad, meaningful and triumphant events in the formation and elevation of one of history’s greatest rock creations. On the other, it’s a film riddled with historical inaccuracies and outright fabrications. Events that never happened are used to create drama; the chronology is shuffled about, and people instrumental in this story are, at times, simply made up for effect. None of that is really new for cinematic biographies-it happens all the time-but in Rhapsody, it comes to us with the blessing of the surviving members of the band and frankly, some of the changes just aren’t necessary. The band’s “breakup” is a good example. It’s played here as seeds sown for the climactic finale at Live Aid – but it never happened, and more importantly, the truth of what actually happened could been just as dramatic if explored, written, the right way.

Still, for all its contradictions, and here’s what I find extraordinary, it ultimately doesn’t really matter.

When the credits roll, you feel jubilant, as long as you embrace the bended truth and suspend all disbelief at the mix of truth and fiction. You will simply walk away elated at the wonder of it all, singing the magnificent songs of Queen with delight. Honestly, the contradictions should matter, and I struggle rationalizing why I’m not as annoyed at the liberties taken as I should have been. However, Bohemian Rhapsody made me ‘feel’ alive, and that’s a rare enough feat that I can’t help but forgive the movie’s flaws. It also means that there is still yet a more honest, real and dramatically truthful story to be told about Freddie Mercury (perhaps the one Sacha Baron Cohen, who was previously on board to play Mercury before creative differences with the Queen members led him to exit, had in mind.)

Performances in Bohemian Rhapsody are very good across the board, with Rami Malek’s performance as Freddie Mercury as fascinating as the man he portrays. While Malek isn’t asked to sing the songs (they are tracked with Mercury’s performances), it doesn’t really subtract from how he becomes Mercury. Malek adeptly captures Mercury’s physical and vocal cadence and flourishes, the way he spoke, his pronunciations around his pronounced overbite. You will lose yourself in his performance, finding it hard to separate the real man from the performer, and it is precisely the reason Malek walked away with the Academy Award for Best Actor at the 2019 Oscars.  Gwilym Lee as guitarist Brian May, Joseph Mazzello as bassist John Deacon, and Ben Hardy as drummer Roger Taylor, are uncanny resemblances and delight in their performances. Aiden Gillen is effective as Queen manager John Reid; Allen Leech is the insidious ‘villain’ Paul Prenter does a fine job; Tom Hollander as band lawyer Jim ‘Miami’ Beech is perfectly understated, and Lucy Boynton gives us a compassionate and sweet Mary Austin.

My first introduction to the music of Queen, like so many important things in my life, came through film. Queen’s celebratory, bewilderingly alive tunes for the film Flash Gordon, and their haunting and moody classic tunes for Highlander, elevating that film into something even more special, instantly became a part of my musical appreciation DNA. These were glorious steps into the extraordinary Rock-God status of Freddie Mercury and the unrepeated, and likely unrepeatable uniqueness, of Queen.

With the controversy surrounding Bryan Singer, who was relieved of his director chair near the end of production, and replaced by Dexter Fletcher, Bohemian Rhapsody could have been sunk and quietly disappeared, but the film is far too entertaining and well made, edited, produced and performed for the controversy to take it down. It’s hard to know how much Fletcher’s contributions made to the final film, but, by all accounts, he’s worked a small amount of magic on the end result and should be applauded.

In the end, what Bohemian Rhapsody does exceedingly well is showcase Queen’s brilliant contribution to rock and explore their special and sublime musical creations unbound by a single genre. The compelling drama comes from the exploration of Freddie Mercury; his humble beginnings, his sexuality, and the complicated relationships he developed and coveted with his wife, Mary. The moments in the film where Mercury contends with his loneliness, the emerging reality of his sexuality, and the relationship he has with his family, and in particular, his father (played quite sternly by Ace Bhatti), are among the most compelling. The disappointment, then, is in how varnished these moments are, relatively speaking. The film never takes the risk to lift the full veil on Freddie Mercury, and that’s what stops this terrific film from being an unabashed classic (that, and the fibs it all-too comfortably tells us).

Simply put, Bohemian Rhapsody on 4K UHD is a marvel. Picture perfection abounding with bright colors, impossible levels of detail, deep blacks when the occasion calls for it, and a layer of HDR 10 grading that brings out a richer sense of color.

The recreation of 1985’s Live Aid performance, a highlight of the film, is rich with detail as well with a highly detailed recreation of the massive Wembley Stadium crowd. It’s a delightful accomplishment and showcases everything that works so well with this release. Highly detailed, superb color balance, natural skin tones – not a thing wrong.

Bohemian Rhapsody thankfully comes with an impressive Dolby Atmos track for those so equipped, and a stunning Dolby TrueHD 7.1 for everyone else.  Everything is perfect on this audio, with a marvelous use of the surrounds for musical performances and crowds, presence of dialogue in the center channel, boom in all the right ways and in the right places, and superb balance all around. The fidelity is one of the best I’ve heard with a brilliant balance.

The audio pulls you in from the first scene and hugs you with a perfect embrace the entire time. Perfection!

The Look and Sound of Queen

In November 2018, another English band, Coldplay, released a documentary featuring behind the scenes footage of the band from their very beginnings. The footage was largely positive, and included a number of musical performances. Coldplay haven’t lived lives as wild and tragic as Freddie Mercury. Their documentary provides a fairly varnished look at the band, with just a glimpse or two at discord or problems. That view is largely what Queen allows seen in Bohemian Rhapsody. I suppose I can understand not wanting an unfiltered view of your past, but there’s more than mere omissions of reality to be found in Rhapsody. Disappointing, but the film still delivers something very special. The truth, I suspect, would have made for an even better film, which is saying something, because Bohemian Rhapsody is so bloody good.024543558309

You didn't mention that the special feature of the complete recreation of the Live-Aid concert has a full Atmos soundtrack, something I wouldn't have expected on a supplement.
You must log in or register to reply here. 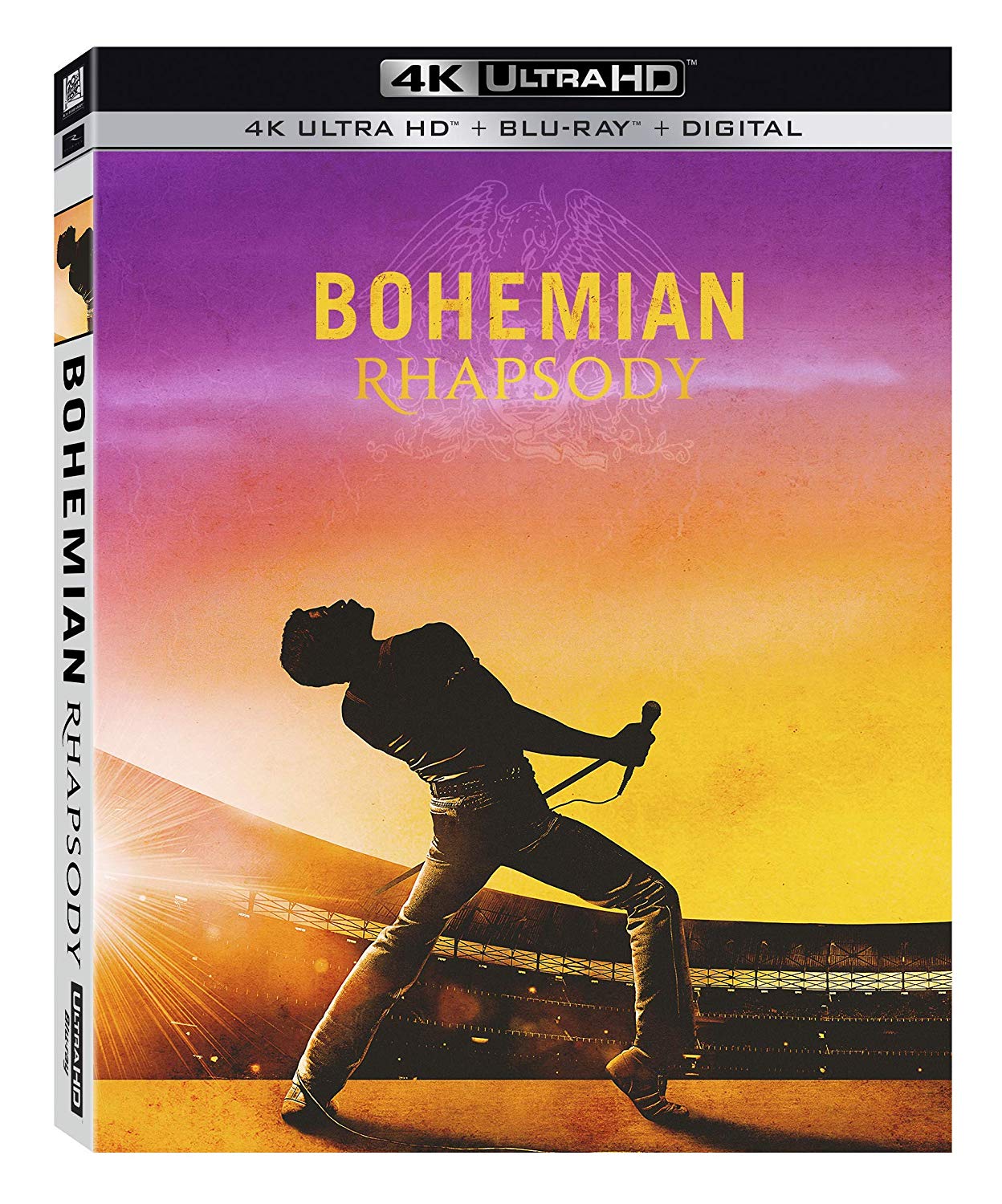