Director Ernst Lubitsch applies his famous “Lubitsch touch” to the screwball comedy genre with erratic results in Bluebeard’s Eighth Wife. A fairly mild farce enlivened by able comedy playing by its two stars and some key supporting notables, Bluebeard’s Eighth Wife won’t replace The Awful Truth, Bringing Up Baby, or My Man Godfrey in anyone’s pantheon of great screwball romps, but on its own is entertaining and unique enough to warrant attention.

American multi-millionaire Michael Brandon (Gary Cooper) has a peculiar way of marrying women in order to sleep with them and then subsequently divorcing them with a $50,000 per year annuity for life settlement before moving on to the next victim. When he meets the lovely, ebullient, and penniless Nicole De Loiselle (Claudette Colbert), he’s cocksure she’ll marry him for his money even though she dickers for a $100,000 per year pre-nup in the event of a divorce. But Nicole has her own agenda: she loves Michael but has her own plan for insuring that theirs won’t just be a quick roll in the hay while he goes off in search of another conquest.

Pairing together for the first time in a more than decade-long partnership to come, screenwriters Billy Wilder and Charles Brackett maneuver their way brilliantly around the enforced Production Code, insinuating Michael’s sexual frustration without ever mentioning the words “sexual intercourse.”  They plot a bright “meet cute” for our leads: a discussion over the purchase of pajama tops and bottoms in a French department store and go on from there infusing their star duo’s utilization of motifs from Shakespeare’s The Taming of the Shrew as well as throwing in a little psychiatric shock treatment along the way. They also neatly divide the film into obvious halves: the courtship in the first half and the marriage/divorce/reconciliation in the second half. Director Ernst Lubitsch manages to smoothly blend process photography of the French Riviera with studio-shot footage to place Colbert and Cooper in Nice (and later Venice and Paris) as well as handling some farcical situations off screen yet with hilarious results that we subsequently see on screen (a bite on the knee which Colbert later treats with iodine, a prizefighter who punches out David Niven’s Albert De Regnier by mistake). Cinematically, the film seems more set bound than usual and doesn’t allow Lubitsch’s lighter-than-air camerawork (The Smiling Lieutenant, The Merry Widow, Monte Carlo), but things move along at a fine clip, and various character actors (Edward Everett Horton, Franklin Pangborn, Elizabeth Patterson) each get small moments to shine.

Many pundits believe Gary Cooper to be miscast in the film, but he isn’t: he’s endearing in spite of the selfish, cocky character he’s playing whom we enjoy seeing being taken down a few pegs by a female of superior intellect. Claudette Colbert seems to be having a grand old time charting her own set of rules in dealing with this unique hubby material. David Niven in one of his earliest important roles is charming and funny as the victim to the machinations of the two primary combatants. Edward Everett Horton does his usual dithery thing as Nicole’s father trying desperately to make ends meet, and Herman Bing has a delightful sequence as a private detective who is yet another male shown up by the crafty Nicole. Warren Hymer is the boxer who finds the wrong target for his knockout punch, and Franklin Pangborn as usual steals his one scene as a hotel manager out to cast out the deadbeats who won’t pay their bills.

The film’s 1.37:1 theatrical aspect ratio is faithfully delivered in this 1080p transfer using the AVC codec. (The main and end titles are windowboxed.) While you’ll briefly notice a stray slight scratch here or a dig there, for the most part, the silky 1930s’ Paramount look is retained for this transfer. Black levels might not be the deepest you’ve ever seen, but the grain structure is very film-like, and the image is pleasingly sharp with fine contrast.

The DTS-HD Master Audio 2.0 sound mix offers nice fidelity for a film of this age. Engineers have cleared away any problems with hiss, crackle, pops, or flutter allowing the dialogue, the music, and the sound effects to blend together into a most enterprising audio track.

Audio Commentary: film historian Kat Ellinger seems a little more prepared and organized than usual, at least in the early going. She does spend too long discussing and reading reviews of the prior Gloria Swanson dramatic version of this story, and in the second half of the movie she tends to chatter away rather aimlessly, but this is one of the better commentaries of hers that I’ve listened to.

Kino Trailers: Since You Went Away, The Lives of a Bengal Lancer, Beau Geste, Separate Tables, Man of the West, A Foreign Affair.

Ernst Lubitsch, Claudette Colbert, and Gary Cooper have all made superior comedies to Bluebeard’s Eighth Wife, but on its own, the film offers an above average comedic confection for fans of the stars or the romantic comedy genre. The Kino Blu-ray also gives us the film looking and sounding about as good as it could possibly look or sound.

This is another film I haven't seen but plan to pick up. It sounds like just the diversion I need during these stressful times. Thanks, Matt!
Reactions: PMF, Matt Hough, timk1041 and 2 others 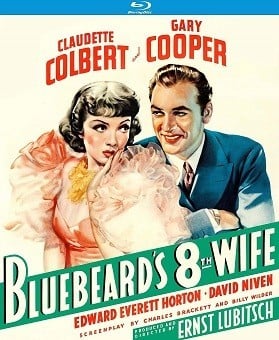