Forum List What's new Dark Style Change width
Log in Register
What's new Search
Menu
Log in
Register
Navigation
Install the app
More options
Dark Style
Close Menu
Posted on August 4, 2019 by t1g3r5fan
You are using an out of date browser. It may not display this or other websites correctly.
You should upgrade or use an alternative browser.
David Lynch masterpiece gets Criterion treatment 5 Stars

The critical and box office failure of Dune (1984) forced director David Lynch to re-examine himself and start anew following that movie’s troubled production. His next project, Blue Velvet, brought him back to his roots in discovering the little mysteries of life that lurk beneath the surface. Previously released by MGM on both DVD and Blu-ray, Criterion has licensed the film for a brand new Blu-ray edition.

In the small town of Lumberton, North Carolina, college student Jeffrey Beaumont (Kyle MacLachlan) discovers a severed human ear in a field and is plunged head long into a mystery. With the assistance of fellow amateur sleuth Sandy Williams (Laura Dern), Jeffrey traces the lead (or ear) back to Dorothy Vallens (Isabella Rossellini), a mysterious nightclub singer; however, this also puts him on a collision course with the sadistic Frank Booth (Dennis Hopper), a madman who will stop at nothing to keep Dorothy all to himself.

Following the lowest point of his career, Blue Velvet marked the return of David Lynch to form and a return to the kind of filmmaking he does best. Here, he presents a small American town where the space time continuum has seemingly imploded on itself; we see items and styles from different eras, meaning that this could’ve happened at anytime at anywhere. Also, Lynch gives us the view that nothing is what it appears to be on the surface; the opening scenes of the movie transitioning from the seemingly idyllic suburbs to the bugs scampering through the grass – all set to Bobby Vinton’s rendition of “Blue Velvet” – is a great example of this. Perhaps the greatest move that Lynch pulls here is to use the pretext of a mystery to make an even greater statement of how strange and mysterious life truly is (a theme he has returned to often many times in his films). To reveal more of the secrets and surprises here would be a shame, but the film is one where seeing it just once isn’t enough; it’s one that confounds, startles and amazes – a quality that hasn’t been lost in the thirty plus years since its release.

In only his second film, Kyle MacLachlan makes a very memorable impression as Jeffrey, who serves as our eyes and ears into the strange new world he explores in his own hometown; outside of Twin Peaks (of course), this is likely his best role to date. Isabella Rossellini (the daughter of Ingrid Bergman and Roberto Rossellini) makes an equally memorable impression as the bewitching and bewildered Dorothy; this part would help launch her movie career. Stealing the spotlight from both is Dennis Hopper, whose unhinged Frank helped relaunch his career following substance abuse issues that plagued him following The Last Movie (1971); Laura Dern is also notable as the fellow amateur sleuth that Jeffrey becomes drawn to during their investigation. Other notable appearances include George Dickerson as the detective whom Jeffrey shows the severed ear, Priscilla Pointer as Jeffrey’s mother, Hope Lange as Sandy’s mother, Frances Bay as Jeffrey’s aunt, Fred Pickler as “The Yellow Man”, Brad Dourif and Jack Nance as Frank’s goons, and – in a memorable cameo – Dean Stockwell as a confidante of Frank’s who lip synchs Roy Orbison’s “In Dreams” in an unforgettable scene.

The original 2:35:1 aspect ratio is intact in Criterion’s new 4K transfer of the film, supervised by David Lynch. Film grain is organic and sturdy throughout, with fine details and color scheme rendered faithfully. There’s very minimal instances of age related problems, making this transfer an improvement over the previous MGM Blu-ray and likely the best the movie will ever look on home video.

Two tracks are available on this edition: a 5.1 DTS-HD Master Audio track supervised by David Lynch for the previous MGM Blu-ray and a 2.0 PCM track representing the film’s original audio mix. Both tracks have strong dialogue and sound mix, with Angelo Badalamenti’s haunting score given great ambiance and fidelity; minimal cases of age related problems are present as well. Both tracks represent the best the film has ever sounded on home video.

The Lost Footage (53 min.) – Carried over from the MGM Blu-ray, a selection of deleted and alternate scenes cut from the movie, as edited together by David Lynch.

“Blue Velvet” Revisited (89 min.) – This feature length meditation on the movie consists of behind the scenes footage by filmmaker Peter Braatz as well as audio clips from the movie.

2017 interview with composer Angelo Badalamenti (15:41) – The composer talks about his work on the film as well as how he decided that music would be his path in life in this recent interview

Room to Dream audio excerpt (18 min.) – An audio excerpt of Lynch talking about the movie taken from a recording of him reading from the book about his career.

Test Chart (1:15) – A brief montage of behind-the-scenes footage of test charts before certain scenes were shot; this is an Easter egg feature not mentioned on the package.

Noticeably absent from this edition is an excerpt of Gene Siskel and Roger Ebert reviewing the movie.

Although it drew polarized opinions upon initial release, Blue Velvet has become recognized as just a masterwork in David Lynch’s career, but a genuine American masterpiece as well. Criterion has put previous home video editions of the movie to shame with a great presentation and an amazing slate of legacy and new bonus features to complement the film. Highly recommended for fans of Lynch and an easy upgrade as well.

It's a strange movie, and definitely the most direct forerunner to "Twin Peaks", with its jarring combination of shocking depravity and campy satire of suburban life.
You must log in or register to reply here. 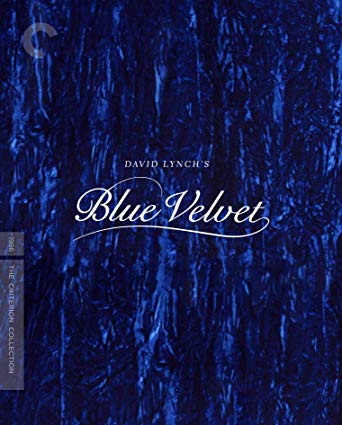