An unusually sensitive melodrama about teenage pregnancy in the 1950s. 4 Stars

Blue Denim is a sensitive melodrama about teenage pregnancy in the 1950s. Though limited by the production code of its time, the film nonetheless manages a surprisingly frank portrayal of a difficult issue. Even when the filmmakers tiptoe around certain concepts which were integral to the plot, they are still able to emphasize the emotion of the situation.

Blue Denim is a series of contradictions. It’s an “issue” film set in the 1950s that could only take place in the 1950s; and yet, its situations and dilemmas seem all too familiar today. It’s a film about teenage pregnancy, and yet, the word “pregnancy” is never said out loud. It’s a film where characters seriously contemplate abortion, illegal at the time, and while the word cannot be uttered out loud, it’s nonetheless a hugely important plot point that isn’t sanitized the way the language is. And, on a technical level, it’s a CinemaScope production dedicated to the most intimate of stories. A film with as many outward contradictions as this one has a million reasons why it shouldn’t work today; it’s to the credit of everyone involved in the production that it somehow does.

Arthur (Brandon deWilde) is your average suburban “good” teenager, just starting to come into his own, with everything that entails. With his best friend Ernie (Warren Berlinger, reprising his role from the original stage production), Arthur experiments with rebellion, sneaking cigarettes and beer and telling white lies to his mother when she wonders what the smell in the basement is. But Arthur at heart isn’t a rebel; he’s a sensitive boy who cares about the people around him and his future. When the family dog has to be put down, an event which happens offscreen and without Arthur’s knowledge, he’s not upset at the idea of mortality; he’s upset because his parents decided to spare him by doing the deed while he was at school. And it’s that sensitivity, that earnestness, which makes his friend Janet (Carol Lynley, also reprising her role from the stage) start to see him in a different light. Before long, Arthur and Janet are an item, stealing kisses discovering their feelings for each other.

In many ways, the film’s greatest tragedy is the ignorance which allowed the story to be set in motion. These aren’t kids behaving irresponsibly without care to what could happen; these are kids who were raised so sheltered that they lacked the agency to understand the consequences of their actions. Arthur’s parents (Macdonald Carey and Marsha Hunt, both delivering the right blend of love and obliviousness) are so concerned about the impending wedding of Arthur’s older sister that they fail to notice that their son is no longer a little boy. It’s implied that Janet’s mother died in childbirth, and her widower father (Vaughn Taylor, making the most of a more two-dimensional role) is so concerned with protecting his daughter from the trials of adulthood that he can’t recognize that she’ll grow up, whether or not he wants her to. Despite the best intentions of all three parents, the children enter their adolescence without the tools to successfully navigate it, making the film a generational tragedy rather than just a teenage one. Combine the ignorance of children who don’t know any better with the inabilities of the adults who do, and it’s a surefire recipe for disaster.

One of the more interesting elements of the film is the juxtaposition of the seemingly perfect family lives with the tragedies lurking beneath the surface. That may be the film’s most profound and effective message. The film bends over backwards to point out how Janet and Arthur are “good kids,” how they come from good families. The subplot with Arthur’s parents preparing for the sister’s wedding could be the main plot of so many other films from the era. By showing us this almost sitcom portrayal of the family in the background, the film is able to illustrate how Janet and Arthur’s situation is not something that happens only to bad kids or bad families, but something that could happen to anyone. At every corner, the film eschews moral judgment in favor of compassion and understanding. That is ultimately the film’s most radical element, that sense of compassion.

Philip Dunne’s direction (working from a script he co-wrote with Edith Sommer, and adapted from the original play by James Leo Herlihy) is surprisingly nimble, packing in a lot of story and emotion within its relatively short (89 minute) runtime. Dunne’s use of the widescreen frame allows his cast to play off of each other in long shot, perfect for capturing the chemistry that Arthur and Janet share, the friendship between Arthur and Ernie, and the distance that Arthur and Janet feel from their parents at their greatest moments of need. The translation from stage to screen is so effectively done that it never feels like a filmed play. And while the production code did necessitate a change to the play’s original ending, what happens in the onscreen ending doesn’t feel like a betrayal of everything that came before.

The line between melodrama and camp can be thin, and this is a film that requires the viewer to put themselves in the time that it was made and in the shoes of its characters. The film needs to be approached earnestly and on its own terms. While it’s easy to see lessons and parallels that still apply today, the film’s delicate emotions have the potential to play very differently when viewed only through a modern lens. But as a study of how the people of a very specific time dealt with a problem which is both universal and timeless, it can be very effective.

Blue Denim is presented in its original black and white CinemaScope aspect ratio of 2.35:1 via the AVC codec. The transfer, billed by Twilight Time as a new 4K restoration, looks pristine, with nary a hint of dust, damage or debris. While the CinemaScope lenses of the time lacked the sharpness of today’s more modern production, this is still a very nicely detailed image with excellent clarity. This is a wonderful transfer presenting a very clean image that still retains a pleasing film-like appearance.

There are two audio options on the disc, both presented in lossless DTS-HD MA – a 5.1 surround track, and a 2.0 stereo track. Of the two, the 5.1 track is the preferred option. Though directional dialogue is used sparingly, and though the soundstage is confined mostly to the front channels, there is a subtle yet recognizable separation of sound which gives the proceedings a very natural feel. The 2.0 option has less separation but still retains a good sense of space. The sound quality on both tracks is excellent, with well-recorded dialogue and no age-related artifacts present.

Isolated Music Track – Presented in DTS-HD MA stereo. Bernard Herrmann’s score sounds excellent in this presentation, though at times it seems a little too reminiscent of his work on Hitchcock’s Vertigo. The love theme, in particular, seems very derivative of his earlier work. Still, if it’s not Herrmann’s most unique work, it is still a quality piece of film music.

Original Theatrical Trailer (3:02, SD) – The trailer is presented in 4×3 letterbox format video which preserves the original aspect ratio within the confines of a smaller frame. Though the video transfer here appears ancient, the trailer offers some insight into how this film was originally marketed.

Six Page Booklet – Julie Kirgo’s insightful essay, which both understands the context of the original film while still critiquing some of the filmmaking choices, is presented alongside production stills and a reproduction of the film’s original poster art.

Blue Denim is a certainly a film of its time, but one whose sensitivity ultimately transcends the period in which it was made. The young actors are all compelling in their roles, and even though the production code of the time limited what words could be said and how the film needed to end, the story is still able to shine through. The disc from Twilight Time includes an excellent presentation of the main feature. If the supplements are on the lighter side, the Bernard Herrmann isolated score is a worthwhile addition, and the trailer does provide valuable insight into how a film with so many then-unmentionable plot points could be promoted. The film’s greatest strength is in how compassionately it treats its characters, refusing to condemn them; it is this sense of compassion that makes the film worthwhile today.

I just ordered the other day with the signed promo, really looking forward to it now. Thanks for the great review!
Reactions: Josh Steinberg

A bit of macabre trivia - The last thing that Nancy Clutter (In Cold Blood) and her boyfriend did just a few hours before she was murdered was to make a date to see Blue Denim the next evening. Her boyfriend, Bobby Rupp, said that "all the girls" were looking forward to seeing it.
Reactions: Josh Steinberg 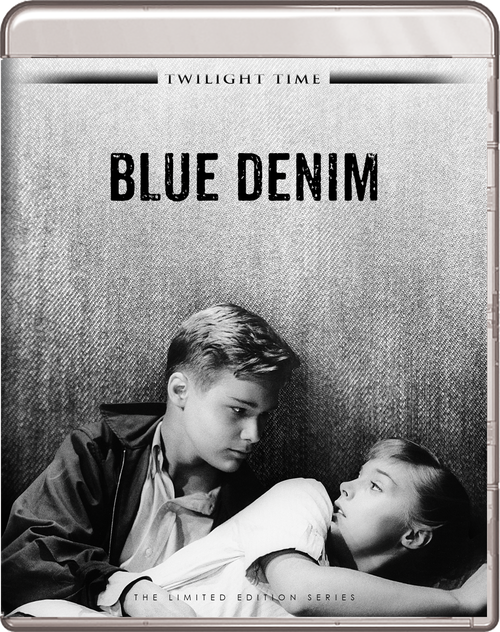