Forum List What's new Dark Style Change width
Log in Register
What's new Search
Menu
Log in
Register
Navigation
Install the app
More options
Dark Style
Close Menu
Posted on September 26, 2016 by Ken_McAlinden
You are using an out of date browser. It may not display this or other websites correctly.
You should upgrade or use an alternative browser.
So-so video presentation of miniseries with iconic Tim Curry performance 3 Stars

The 1990 miniseries of Stephen King’s It took on the daunting task of adapting the massive (>1100 pages in my paperback edition) and massively popular (14 weeks at the top of The New York Times Best Sellers list in 1986 and 1987) novel into a two episode miniseries.  It was a ratings success at the time, and Tim Curry’s interpretation of Pennywise the Clown has been haunting the nightmares of anyone who saw it for 26 years and counting.

I recall being very excited to see this series when it first aired in the fall of 1990.  The first installment exceeded my expectations with a tight structure that balanced introductions of the large cast of characters with plot advancement that felt perfectly paced.  The screenwriter had taken the structure of Stephen King’s novel, which interlaced parallel stories of a group of children and their adult selves three decades later, and split it in a way that made perfect sense for a two night miniseries event.   Needless to say I was excited to see the concluding installment.  Unfortunately, night two proved to be a disappointment.  The tight structure was abandoned, too much screen time was devoted to sequences that did not pay off, and story and character beats that were iconic in the novel seemed shoehorned in and unearned.  It did not help that it led to a climax with the protagonists battling a terrible special effect.

As disappointing as part 2 of the series is, it does not completely undermine the good will earned during part 1.  First among the series’ virtues is the scenery  (and limb) chewing magnificence of Tim Curry as Pennywise the Clown.  Even viewers without a hint of coulrophobia going into the TV series will find themselves getting nervous around children interacting with clowns after seeing it.  The juvenile and adult versions of the “Losers Club” are also well cast and make a believable band of outcasts and friends.  The empathy they create with viewers is critical for the suspense and horror to work when Pennywise’s threats begin to escalate.

Note to viewers:  When this miniseries first aired, the second part began with a credit sequence playing over scenes of  Richard Thomas’ Bill Denbrough returning to Derry, Maine, checking into his hotel, and having a conversation with the woman working behind the desk.  In this version, the part two credits as well as the scenes over which they played have been excised.  The final shot of part one is followed by a quick cut to Bill arriving at a cemetery.

The film is rendered to disc as an AVC encoded 1080p presentation that is pillarboxed to the original 4:3 broadcast television ratio.  Previous DVD releases were in a matted widescreen ratio, but I was happy to see it back to the way I remember originally watching it in 1990.  Director Tommy Lee Wallace even comments on the efforts needed to compose for the 4:3 aspect ratio on the included commentary which was, ironically, recorded circa 2002 for the original 16:9 cropped DVD release.

I was not happy to see the lackluster transfer and encoding afforded this release.  The overall look is soft and inconsistent throughout with grain that sometimes looks more like video noise than actual film.  Certain sequences look less like a Blu-ray than a good upconversion.  It certainly does not look like anyone recently went back to the original film elements in order to create this high definition transfer.

The primary audio is presented via a DTS-HD MA 2.0 encoding of the miniseries’ original stereo audio.  There are some nice matrixed surround effects during the climactic sequences which take place underground, but for the most part, the track presents serviceable sound with most of the dialog and sound effects concentrated in the center of the stereo image and music spread more widely across the stereo channels.  Fidelity is solid, primarily benefiting the music score which is not quite as full range and dynamic as one might hope, likely due to its broadcast television origins.

There is only one special feature, but it is a pretty good one.

The disc features a full length screen specific audio commentary from Director Tommy Lee Wallace and cast members Dennis Christopher (Eddie), Tim Reid (Mike), John Ritter (Ben), and Richard Thomas (Bill).  Christopher, Reid, and Ritter were recorded together and play off of each other during the commentary.  Wallace and Thomas were recorded individually.  As one might expect, Wallace provides the most information about the series’ inception and production, while the cast members focus more on the their characters and on set experiences. Christopher, Reid, and Ritter inspire each other to go off on some tangents, but they seem to be enjoying their reunion, which makes it a fun listen despite the occasional loss of focus.

Stephen King’s It  is half of a great miniseries with a likable cast and an exceptional and iconic performance by Tim Curry as Pennywise the clown.  It is presented on Blu-ray disc with a disappointing and inconsistent video transfer and solid if not spectacular stereo audio.  A commentary recorded for the 2002 DVD release is the only extra on the disc.

Sounds like my DVD version is good enough, based on the disappointing technical results here.

Thanks for the review, Ken. While I loved the book, I have never seen the TV movie. I had this on pre-order with Amazon, but based on your lackluster review, I decided to cancel. I can always rent it for $3 if I decide I want to see the film.

And unfortunately it is still cut like the DVD. Only the VHS and Laserdisc releases have been uncut so far. No Sale.
T

A while back I finally watched the 1990 TV mini-series It on Blu. I had never seen this before - either on TV or in any previous home video version. I did read the Stephen King novel in the late 1980's, almost 30 years ago.

-Excellent PQ, color, sound. This was especially impressive given that this was an early '90's made-for-TV mini-series.

-I didn't mind the edits between the two segments, since the "cuts" seemed relatively seamless & since this was obviously done to make this seem more like one long film. That being said, I'm sure I would have been bothered more by this if I had seen this on TV - or on VHS - when the two parts were included in their entirety.

Re: the TV mini-series itself:

-Fantastic adaptation of the ST novel. I am extremely impressed, especially given that this was a network TV mini-series, and obviously didn't have the budget of an expensive Hollywood film. Much of the dialogue was right out of the book itself, including many of the quotes. Also, the story (towards the end) that Ben Hanscom (John Ritter) told to his friends about losing weight in high school - so he could try out & run on the track team - was also right out of the King book. Very nice, since I'm a purist when it comes to screen adaptations based on novels. Obviously, they couldn't put everything on screen given that the novel was so huge, but considering this mini-series was close to 3 hours long they included a lot.

-Excellent story & great casting. Well-done efforts to have at least a couple of the kid actors look a lot like the later adults, including the young actress who played Beverly - she looked quite a bit like Annette O'Toole, her adult self (other than the hair color). Also, it was a nice touch to have the young Bill Denbrough (J. Brandis) have a mole on his face, like the older Denbrough (Richard Thomas).

-Very disturbing story & above average special effects, especially by early '90's TV standards. Pennywise was quite frightening in all of his incarnations, especially as the seemingly harmless clown (even before you saw him with the fangs & eyes). The grotesque lobster creature at the end was well-done as well.

-Good job of recreating a small town in both the 1960 & 1990 time-frames; the transition between the two eras was seamless re: seeing similar storefronts, houses, etc. - with the obvious differences that 30 years will bring.

-Nostalgia obviously was very strong in this story - i.e., going back & forth between childhood & adulthood - and the adult selves slowly remembering a lot of the things that happened in their youth. I'm sure a lot of adults (myself included) can relate to having a group of friends you hung out with as kids/teenagers, and then losing touch with them as you get older & move on - as in this story. 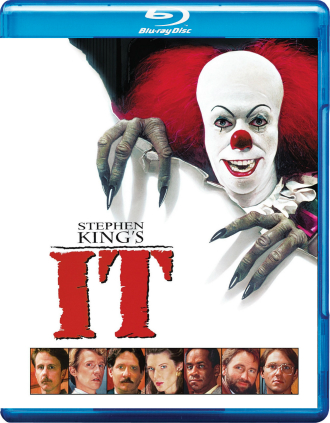