Director Michelangelo Antonioni takes a rather jaundiced look at the London swinging singles scene of the 1960s in Blow-Up, the director’s tenth film and a great international success critically and at the box-office, his first full length feature in the English language.

Director Michelangelo Antonioni takes a rather jaundiced look at the London swinging singles scene of the 1960s in Blow-Up, the director’s tenth film and a great international success critically and at the box-office, his first feature film in the English language. Like so many previous Antonioni films, there is ambiguity and indecisiveness at the core of his story, but that doesn’t prevent it from being endlessly fascinating to watch and just as much fun to discuss its inherent meanings and morals. As the work of a master craftsman, it has few equals despite one or two unnecessary meanders as the film unfolds.

Thomas (David Hemmings) is a London photographer who spends part of his time photographing fashion models but is more interested in sociological photography for a book he’s planning to publish. One day, however, photographing a pair of cavorting lovers in Maryon Park, he thinks he may have photographed something far more sinister: a murder. After developing his park pictures and blowing up select frames, Thomas is shocked to find an ambiguous image lurking on the edge of the frame holding and pointing what looks like a gun, and his final shot seems to show a body lying on the edge of some shrubbery. The only thing clear is that the woman (Vanessa Redgrave) in the photo now in a state of near panic has appeared at his studio and desperately wants the pictures he took.

Looking at the film as a potential murder mystery will be a source of endless frustration for the viewer because the Michelangelo Antonioni-Tonino Guerra-Edward Bond screenplay really isn’t interested in pursuing any kind of real investigation into the identities of the people involved or what in effect has happened or why. What Antonioni seems to be more interested in, however, is making a statement on how the swinging 1960s in London has robbed the hip younger generation of any real nobility of purpose: their focus seems to be on where their next high will come from, be it from alcohol, sex, or drugs, and the value of a human life becomes not only of lesser importance but of no importance whatsoever. What does Thomas do when he develops his pictures, sees something suspicious, and goes to see if a body is there? Does he call the police? Does he take follow-up pictures? Does he protect the evidence he already has knowing that a woman (and her potentially murderous cohort) are trying desperately to get those pictures away from him? No, he frolics with two teenage girls (and presumably has three way sex). He tries to track down his book agent (Peter Bowles) to take him to see the body, but instead lets himself be seduced and ends up stoned only to wake up the next morning with all evidence of the crime gone.

Just as the characters in his previous great success L’avventura made a minimal effort to find their missing friend only to become distracted and go on to pursue other interests, so, too, here do human beings’ self-interest and self-importance take precedence over doing the right and honorable thing. Antonioni begins and ends his film with a crew of noisy young mimes (antithetical in itself) interacting with our protagonist; in the end, he takes part in their tennis game: has the young photographer finally decided to interact more completely with the things life puts in his way? Only the filmmaker can say for sure. But Antonioni has created a visual masterpiece with this work. The fashion layout scenes in the early going are mesmerizing in their compositions and stylish use of color, and the three sequences in Maryon Park with no music but the wind swishing in the trees and crackling leaves and branches in the surrounding areas are simply hypnotic. The arrangement of the blow-ups is masterful in piecing out what actually happened in that park (the still camera picks up far more than the viewer or Thomas saw in real time), and the images are completely haunting. But one thing is clear: there are two rather notably wrong steps in the movie: a completely extraneous subplot with a young artist (the very young John Castle) and his relationship with Patricia (Sarah Miles) who Thomas also seems to care about, and in Thomas’ sojourn around London to find his agent, he stops for a moment at Club Permutit to hear a performance of the Yardbirds with a zombie-like crowd seemingly immune to the beat until the bassist breaks up his guitar at which point they seem to go berserk. More commentary on the younger generation?

His performance as the brusque, often thoughtless Thomas put David Hemmings on the cinematic map, and he’s certainly a role model for the mindless swinging 1960s tooling around London in his Rolls Royce sporting a devil may care attitude and always acting on the spur of the moment with no set plans for anything. Vanessa Redgrave gets the essence of the woman’s alarm and anxiety over what the photographer may or may not have seen, and her scene in the gallery with him when it’s obvious she’ll do just about anything to get that roll of film crackles with tension and uncertainty. Supermodel Veruschka von Lehndorff plays herself in one of the early fashion shoots, and Jane Birkin and Gillian Hills are the two giggling teenagers who wallow around on purple paper for the photographer’s delight. As stated before, Sarah Miles and John Castle, who are pictorially very appealing, have very little to do in the movie.

The film’s theatrical aspect ratio of 1.85:1 is faithfully rendered in this 1080p transfer using the AVc codec. Sharpness is outstanding throughout the presentation with succinct details to be seen in facial features, hair, and the costumes. The Metrocolor is more controlled than usual for the process with realistic and appealing skin tones and saturation levels that never bloom or feel unnatural. Black levels are very good but not great, and there is one hair that distractingly flutters for part of a scene (it seems ridiculous that this wouldn’t have been digitally removed after all these years). The movie has been divided into 25 chapters.

The PCM 1.0 sound mix (1.1 Mbps) is crisp and effective for its era. Especially important is the sound of the wind in the trees during each of the Maryon Park sequences, and the soundtrack presents it tellingly increasing the atmosphere tenfold each time we enter that domain. A sudden crack off to the side during the nighttime visit alerts us that there may be a stranger hiding in the bushes and that Thomas’ life may be in grave danger, another very effective small bit of atmospheric effect. Herbie Hancock’s jivin’ background score and the well-recorded dialogue all blend together seamlessly. There are no age-related problems with crackle, hiss, or flutter.

Antonioni on Antonioni (5:30, HD): a brief interview with the director after accepting the Palme d’Or at Cannes.

David Hemmings Interviews (HD): two interviews at different times of his career, in 1968 (5:23) after his fame from the movie had solidified and in 1977 (20:18) interviewed by Brian Linehan for City Lights where he could look back at that period of his life with more perspective.

Vanessa Redgrave Interview (44:44, HD): interviewed by Philippe Garner on the 50th anniversary of the film’s release.

Jane Birkin Interview (8:53, HD): a 1989 interview with the actress who recalls her two days of work on the movie but who also reflects on this difficult period in her life married to celebrated composer John Barry and just having given birth desperate to keep her husband’s interest.

Antonioni’s Hypnotic Vision (HD): individual analyses of the film through the eyes of its being influenced by painting discussed by David Mellor (16:06) and through the vision of its emphasis on photography by Philippe Garner and Walter Moser (29:49).

Sixty-Four Page Booklet: contains cast and crew lists, information on the video and audio transfer, some stills from the film and production booklet, a celebratory analysis of the movie by film scholar David Forgacs, memories from the set by Stig Bjorkman, Antonioni’s questionnaires to photographers to give him a feel for the lifestyle, and the original short story by Julio Cortazar on which the script was very loosely based.

Even though it was denied a Production Code seal, Blow-Up went out to theaters anyway and did big business, one of the films (along with Who’s Afraid of Virginia Woolf) which led to the demise of the antiquated Code. The Criterion edition of this landmark movie is superlative in practically every respect, and those with a taste for the avant-garde circa 1966 are certainly encouraged to see it.

Do you really not like this film? It sounds distasteful to you.

I'm probably one of the very few who likes Brian DePalma's Blow Out, which in some ways is an homage, better. Blow-Up is a fascinating movie in places, but right now I don't really have a desire to own it.
Reactions: Jimbo64 and aPhil

JoeDoakes said:
Do you really not like this film? It sounds distasteful to you.
Click to expand...

I thought this film was great along with Herbie Hancock's score. Great presentation thanks to Warner and Criterion even though it's an MGM film.

As always, a well written and perceptive review. I think Matt H. has been very fair and generous.

As for myself, I'd probably rate the movie a "B" in my letter grade way of rating. There are a lot of other movies from the 1960s that I like a lot better. But, I admit, I haven't seen it in probably 25 years.

I've only seen Blow-Up a few times, but I enjoyed the viewings and I'll probably pick up the Blu-Ray. The film's cinematography and production design should both get a noticeable boost in presentation over the older DVD release. I can't say which I prefer, but I also enjoy DePalma's version of this story - Blow-Out.

(When I saw the thread, the first thing that popped into my mind was an HTF member who hasn't been around in these parts in years. George Kaplan (which I've always assumed was a user name homage to Hitchcock's North by Northwest). But, I digress. If I recall correctly Kaplan had a lot of disdain for Blow-Up and considered it pretentious. One of many films, we disagreed upon.)

Yes. The review positive but some of your comments made it sound like the film wasn't to your taste.

Not at all. I was trying to ascertain what Antonioni's tastes, attitudes, and opinions were, difficult if not impossible. This is another film like Nashville and a few others that have only gained more in my respect for them over the years.
You must log in or register to reply here.
Share:
Facebook Twitter Reddit Pinterest Tumblr WhatsApp Email Link 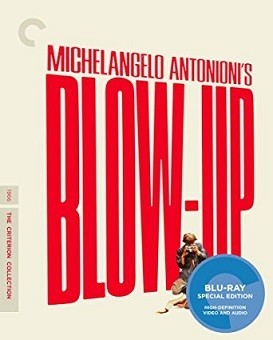