Forum List What's new Dark Style Change width
Log in Register
What's new Search
Menu
Log in
Register
Navigation
Install the app
More options
Dark Style
Close Menu
Posted on April 26, 2020 by t1g3r5fan
You are using an out of date browser. It may not display this or other websites correctly.
You should upgrade or use an alternative browser.
Valentino star making vehicle debuts on Blu-ray 3.5 Stars

Few silent stars continue to emit a mystique and aura about them in the present day quite like Rudolph Valentino. While his life and career were both tragically short, he was considered one of the silver screen’s first great sex symbols, first noticed in Rex Ingram’s The Four Horsemen of the Apocalypse (1921) achieved with a great performance as the eponymous character in The Sheik (1921). However, it was Blood and Sand that helped cement him as a major star and box office draw. Kino has upgraded their previous DVD with this Blu-ray release.

Village peasant Juan Gallardo (Rudolph Valentino) has dreams of becoming a great matador in all of Spain, something that not even the death of one of his friends in an amateur bullfight or the disapproval of his family can blunt. When he grows into a man, he achieves his dream and also marries his childhood friend Carmen (Lila Lee). However, his ambitions and values are tested when he meets the tempestuous Dona Sol (Nita Naldi) and begins an affair with her; it’s when he realizes his error and tries to break away from her that Juan’s fate takes a dramatic turn for the worse…

Blood and Sand is a nicely done romantic drama that proved to be a boon for its leading man. Director Fred Niblo, who took over filming from John S. Robertson during production, has a great handle on Vicente Blasco Ibanez’s story (which would be remade in Technicolor in 1941) and also shows a knack for action, especially during the bullfighting scenes – not too surprising given that Niblo had just directed Douglas Fairbanks in both The Mark of Zorro (1920) and The Three Musketeers (1921) prior to this movie and would go on to direct Ben-Hur: A Tale of the Christ (1925) after this movie. Also worth mentioning is the use of a subplot dealing with a small time outlaw; his rise and fall is parallel to Juan’s own fate and is alluded to several times during the movie. The only critique (albeit relatively minor) here is that the proceedings may seem a bit antiquated today in pacing and story, but other than that Blood and Sand should be worth seeking out as a notable example of Silent Era Hollywood at its prime and an icon’s finest hour.

Just fresh off of The Sheik (1921), Rudolph Valentino cemented his status her as one of the leading romantic leads in Hollywood with his portrayal of the ill-fated Juan; he would end up having string of disappointing features following this movie before The Son of the Sheik (1926) would be his next big success, although he wouldn’t be around to see it – he died from complications following emergency surgery at the young age of 31. Lila Lee is notable as the virtuous Carmen, whom Juan marries and tragically betrays; she would survive the transition to sound films but never had another major leading role like she did here. As the tempestuous tempress Dona Sol, Nita Naldi would cement herself as one of the silent screen’s leading “vamps”; unlike Lee, she never made a sound film, but did continue to work on the stage after making her last film. Other notable appearances include Rosa Rosanova as Juan’s mother, Rosita Marstini as Juan’s sister, Leo White as Juan’s brother in law, Fred Becker as Jose bullfighting manager, George Field as a fellow matador, Jack Winn, Harry Lamont and Gilbert Clayton as members of Seville’s club scene and Walter Long as the outlaw Plumitas, whose own fortunes and demise parallels Juan’s.

The restored 104 minute version of the movie is presented in a 1:33:1 aspect ratio for this release, taken from a 4K master from film elements from three different sources (Cinematheque Francaise, the Paul Killiam Collection & Eye Filmmuseum) and color tinted according to instructions from the 1922 continuity script. Film grain is organic with fine details and original color tints rendered faithfully; scratches, tears and dirt are present, but that’s not surprising given that three sources were used for this transfer, but otherwise nothing too distracting. Overall, this is likely the best the movie will ever look on home video and an upgrade over the previous Kino DVD.

On a DTS-HD Master Audio track for this release, the movie is accompanied by a score from the Mont Alto Motion Picture Orchestra. The music has great ambiance and fidelity with no signs of any problems like distortion or dropouts present.

Commentary by film historian Anthony Slide – Slide goes into the movie’s production as well as some of the themes and the background of the cast in this insightful commentary.

Introduction by Orson Welles (17:07) – Recorded for TV called The Silent Years: Films from the Collection of Paul Killiam, Welles talks about the movie and his own personal recollection and experience with it.

Valentino’s Funeral Procession footage (8:03) – Footage from the funeral procession in New York City is presented with a musical accompaniment by Rodney Sauer.

Will Rogers parody film (6:43) – A brief excerpt from the short film Big Moments in Little Pictures (1923), with Rogers recreating a scene from the movie; musical accompaniment by Rodney Sauer.

“You Gave Me Your Heart” audio recording (4:13) – The film’s love theme is performed by Susan Rogers with Rodney Sauer performing the music.

Successful with both critics and audiences at the time, Blood and Sand survives today as one of the best testaments to the enduring mystique of Rudolph Valentino. Kino has bested their previous DVD release with an improved transfer of the movie and a solid slate of special features. Highly recommended.

It looks outstanding. Much better than the previous releases. The extras are also outstanding. The music is good.
You must log in or register to reply here. 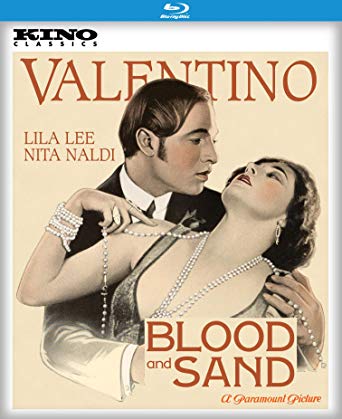