Forum List What's new Dark Style Change width
Log in Register
What's new Search
Menu
Log in
Register
Navigation
Install the app
More options
Dark Style
Close Menu
Posted on September 14, 2019 by Matt Hough
You are using an out of date browser. It may not display this or other websites correctly.
You should upgrade or use an alternative browser.
Fair romantic thriller could have been better with tighter plotting and better performances. 3 Stars

Philip Dunne’s Blindfold offers a fair share of mystery and thrills for your movie dollar, but it doesn’t quite have enough enigmatic surprise in its narrative to transport it to a higher level of cinematic delight.

In a decade that offered the manifold and pleasurable mysteries and thrills of Stanley Donen’s Charade and Ronald Neame’s Gambit, Philip Dunne’s Blindfold doesn’t quite measure up. The set-up is promising, and there’s a competent cast of players to do their best in putting over some of the outlandish occurrences of the plot, but in the end, the thrills are a bit thin on the ground, the comedy often seems forced and obvious, and the romance, almost always a key to the success or failure of these enterprises, runs a bit too frequently hot and cold for comfort.

When top-level scientist Arthur Vincenti (Alejandro Rey) suffers a nervous collapse, his military handlers led by the enigmatic “General” (Jack Warden) fear he may be at risk of being kidnapped by a group of international terrorists who sell their victims to the governments of communist nations. Vincenti’s former psychiatrist Dr. Bartholomew Snow (Rock Hudson) and his highly strung sister Vicky (Claudia Cardinale) are drawn into a web of intrigue alongside the mysterious CIA man Fitzpatrick (Guy Stockwell) who claims Vincenti may already be in the hands of enemy agents.

Part of the fun of thrillers such as this that involve ordinary citizens in various forms of espionage and skullduggery that puts them way over their heads in dealing with the operatives of the world lies in the question of the trustworthiness of the various individuals involved in the hunt and chase. Charade handled this magnificently dangling the viewer until the very last scene as to who was lying and who was telling the truth about his identity. Philip Dunne and W.H. Menger’s script based on the novel by Lucille Fletcher isn’t nearly as adept in keeping the true identities of the various parties in doubt for more than half of the length of the picture. They have also taken a bit too much dramatic license in setting much of the climactic action in a Southern swamp, allegedly full of alligators and venomous snakes but removing those dangers as our heroes (and later the villains) go tromping off through them in the black of night. Dunne and Menger try to keep things light with the feisty romance between Dr. Snow and Miss Vincenti, but the couple breaks up and makes up too frequently for that not to become tiresome after a time. Director Dunne stages the “meet cute” between the two eventual lovers a bit ham-handedly (after all the grief she causes the doctor on their initial meeting, his open-hearted trust of her makes him seem simpleton-ish), but the director does well in the film’s first hour establishing the trust element that puts everyone’s credibility in doubt until things sort themselves out.

Rock Hudson’s light comic approach to the plot doesn’t quite have enough gravitas to ground the narrative as completely serious business (Cary Grant handles that balance between off-the-cuff comic annoyance and serious business so much better in films like Charade and North by Northwest.) Claudia Cardinale’s comely presence is mostly a decorative one as the victim’s concerned sister. The filmmakers take every opportunity to feature her in outfits as skimpy or wet as the still-in-effect Production Code would allow, but unlike Audrey Hepburn in Charade or Eva Marie Saint in North by Northwest, she really is only peripherally necessary to the plot especially as things begin unfolding. Jack Warden has appealing authority as the (alleged) NSA agent guarding the mentally uncertain Arthur Vincenti of Alejandro Rey, and Guy Stockwell adds equal parts of enigmatic allure as (alleged) CIA operative James Fitzpatrick. Anne Seymour is great fun as Snow’s loyal Girl Friday Smitty, and Hari Rhodes adds some authenticity as Captain Davis. Brad Dexter has a pretty much throwaway part as suspicious Detective Harrigan while Vito Scotti and Angela Clarke score positive impressions as Vicki’s adoring parents who delight in her engagement to the eligible Dr. Snow.

The 1080p transfer (encoded by AVC) remains true to the film’s 2.35:1 Panavision theatrical aspect ratio. Generally, the picture is sharp and the color levels are true (offering some nice location New York City backdrops from the mid-1960s for some of the action), but clean-up has been a spotty affair as dust specks dot the image pretty much throughout but sometimes more heavily than other times. Black levels are good but not great in the climactic swamp scenes. The main menu doesn’t offer any chapter selection, but the movie has been divided into 8 chapters.

The DTS-HD Master Audio 2.0 mono audio mix sounds true to its era with clear dialogue but something less than punchy high and low ends. Lalo Schifrin’s score and the sound effects are blended nicely with the dialogue track, but thrillers like this suffered a bit in the era without stereophonic implementation.

Philip Dunne’s Blindfold offers a fair share of mystery and thrills for your movie dollar, but it doesn’t quite have enough enigmatic surprise in its narrative to transport it to a higher level of cinematic delight. The Kino Studio Classics release isn’t pristine, but for fans of its stars or its genre, it looks and sounds well above average.

I never bought the Vault Universal Series DVD, but earlier this year, I did purchase the HD Digital from iTunes for $4.99. What you describe in your fine review is close to what that stream displays on my OLED. Thanks for the review as this is one of those titles I'm going to pass buying the BD disc and just stick with that HD Digital.

Nice review, Matt! I haven't seen Blindfold before, but with that cast, and with that type of '60s spy / romance caper story, I'll be all over this sucker as soon as I am able.

Robert Crawford said:
I never bought the Vault Universal Series DVD, but earlier this year, I did purchase the HD Digital from iTunes for $4.99. What you describe in your fine review is close to what that stream displays on my OLED. Thanks for the review as this is one of those titles I'm going to pass buying the BD disc and just stick with that HD Digital.
Click to expand...

I think that's a wise decision.
You must log in or register to reply here. 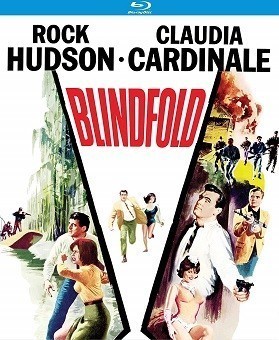